I've been assuming that osculating, Keplerian, and orbital elements are all synonyms, with mean orbital elements just being these averaged over some time. However occasional comments make me suspect that there are some subtleties I'm missing. Could someone clarify the differences (if any) between these terms:

Your assumption is a good starting place and its good to be cautious about it. Many of us are guilty of abbreviation or outright misuse of the terms for convenience. Here's my rough guide, not meant to be precise but rather to address the overlapping usage. I've spent a bit more time on the basic definitions as this is probably where variations in usage arises.

Orbital elements: the 6 parameters: semi-major axis, eccentricity, inclination, RAAN, argument of perigee, and mean anomaly. This describes the shape of an orbit and the position of an object in it, plus a 7th parameter, the time (epoch) at which this situation exists. This is the most general term, all the others in the OP's question are subsets of this term.

Keplerian elements: This specifically refers to the same 6 elements + time that apply to a Keplerian orbit. This means different things according to the context.

Osculating elements: the same 6 elements + time but referring to a real orbit, where all the rest of the features of a real orbit such as the non-spherical Earth, atmosphere, solar radiation pressure and the effects of the Sun and the Moon are acknowledged implicitly. Such an orbit is not elliptical, it is lumpy and evolves continually so that the satellite path is different for every revolution.

For this concept to make sense the context has to be that these features are modelled, just not explicitly announced at this moment. Thus the element set might be numerically indistinguishable from a keplerian set (ellipse definition) but would describe a different orbit by virtue of the propagator that is implicitly referenced.

In practice osculating elements are likely to include some additional parameters reference to an object's area/mass ratio in order to support calculation of the effects of atmospheric drag or solar radiation pressure, where the latter will probably roll-in the effects of surface reflectance.

Its a feature of the community that people rarely go out of their way to describe the ins and outs of their model as its assumed as a given. If you wanted to use osculating elements solved by a different satellite operator, for perhaps for co-operation in collision avoidance, it would be up to you to learn about their orbit determination propagator and do comparisons on a mutually known object. I suspect many don't have the budget for such things.

Mean orbital elements: The 6 elements plus time. I have only seen this term in the context of SGP4 TLEs though in principle it could apply to other approaches. There is a public definition of this system and the additional parameters it requires such as for addressing atmospheric drag.

I understand that the lumpiness of the orbit developed from osculating elements is smoothed out. Whilst the name "mean" suggests that this smoothed orbit could be an ideal ellipse, as per Keplerian definition 1 above, the SGP 4 model propagates orbits that are not elliptical, they just have less bumps than modern osculating orbits.

Edit: I found this quote which helps with the "mean elements" concept.

The elements in the two-line element sets are mean elements calculated to fit a set of observations using a specific model—the SGP4/SDP4 orbital model. Just as you shouldn't expect the arithmetic and geometric means of a set of data to have the same value, you shouldn't expect mean elements from different element sets—calculated using different orbital models—to have the same value. The short answer is that you cannot simply reformat the data unless you are willing to accept predictions with unpredictable errors.

I find these terms easiest to explain using an analogy. Let’s take these 5 points in the x,y plane:

We can perform the following operations on them in a Jupyter Notebook and produce a simple plot: 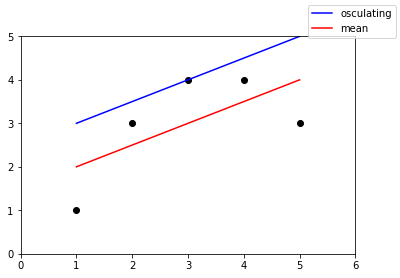 With these concepts in hand, we can now draw sharp analogies to the corresponding four concepts that you have asked about:

In discussions of comet and asteroid orbits, these concepts operate in a fairly pure form: usually such bodies are modeled with strict Keplerian 2-body elements, so that any element set for them is going to be either an “osculating Keplerian orbit” or a “mean Keplerian orbit”.

Planetary orbits are complicated enough that I rarely see discussion of mean elements for them. Typically astronomers will either use a full n-body simulation (or a JPL ephemeris that results from such a simulation run on JPL computers), or else they will use osculating elements — for example, to draw a planet’s orbit in a planetarium program as a closed curve, instead of drawing the real orbit that never returns to the exact same place after each revolution.

Finally, earth satellite orbits are most complex, because a set of Kepler-like parameters are supplied to an algorithm called SGP4 — which is a noticeably non-Keplerian attempt to model how real satellite orbits are warped by influences like the Moon’s gravity and by decay from atmospheric friction. I call SGP4 merely “Kepler-like” because if you give SGP4 the orbital elements that you would normally expect to produce a given position and velocity, you’ll get a somewhat different position and velocity out! Whether you want to produce osculating SGP4 elements, or mean SGP4 elements, you are going to have to start with approximate elements then use an optimizer to tweak them until the output of SGP4 is either the osculating position and velocity, or the mean solution, that you want.

These are the strict definitions. You will usually find that in any particular discussion or context, any one term might imply several of the others, depending on the community in which the discussion is taking place.

Not the answer you're looking for? Browse other questions tagged terminology orbital-elements or ask your own question.

9
How close would the Tesla Roadster with Starman have to get to Earth in order to become attracted and fall on Earth?
6
Can Keplerian elements from TLEs be used without SGP?
4
Why does the eccentricity of Venus's (and other) orbits as reported by Horizons vary based on the frame origin and basis?
4
Recreating the eccentricity value of TLE
3
Orbit Maneuvering
5
Keplerian Orbital Elements ↔ Cartesian ECEI with WGS84 Corrections
3
From osculating to mean equinoctial elements and back
2
Ephemeris output from Skyfield
2
Failing at getting apogee and perigee from TLE
0
TLE data conversion to osculating orbit elements
See more linked questions

10
At which point would two GSO/GEO satellites with similar orbital elements be closest to each other?
14
Converting Orbital Elements to Cartesian State Vectors
4
Deriving the changes in Keplerian Elements induced by small impulses
7
What's a Brouwer-Lyddane mean semi major axis, or any other, for an orbit in a lumpy gravity field?
5
Calculating velocity state vector with orbital elements in 2D
3
What are the symbol definitions in the equations for finding orbital elements?
8
How much delta-v does it take to go from one arbitrary orbit to another?
6
How can I calculate the future position of a satellite orbiting a central body as a function of time using known orbital elements?
5
Relationship between osculating eccentricity and Brouwer-Lyddane short eccentricity