I read that SpaceX is starting to work on fairings reusability. I couldn't find any information, so I would like to know more about them. In particular, I remember a quote from Musk saying that fairings cost up to several millions of dollars.

How much does a fairing system cost? How can they be recovered? Would they float on water or would they need floatation devices?

Apparently this was considered by SpaceX in Q1 2015, to work around a production bottleneck. Due to delays in 2015 after the June 2015 loss of CRS-7 that bottleneck may not have occurred. As of CRS-8 (1 year later) we haven't seen a recovery attempt but it's still something SpaceX wants to do.

This slide is from an internal SpaceX presentation: 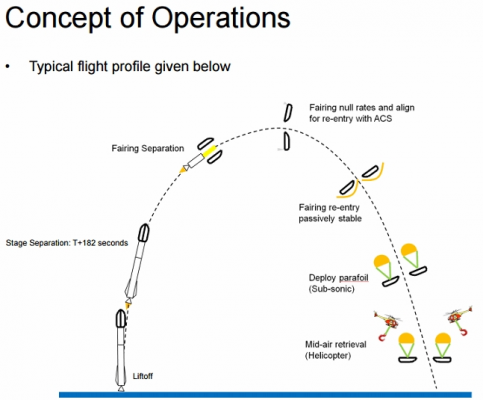 SpaceX note that by the the end of 2015, fairing production will not be able to keep up with desired fairing launch frequency.

Incremental improvements in production are occurring to resolve this, but a redesign is needed to drastically improve fairing production.

The new fairing will be designed from the beginning with reusability in mind. As reentry load cases mature, parts will be designed to these loads. Also, an experimental cold gas ACS system is being added to the current fairing and fairing 2.0 will include a more production ready system.

Assuming the ACS system is successful in making the fairing survive reentry, a parachute system will be added to each fairing half as well - with helicopter recovery shown in slide.

During the post launch briefing of CRS-8, Elon Musk mentioned that:

A few more things we want to do... we want to try to bring back the fairing - the big nose come back. That will certainly help because each of those cost several millions.

Midair helicopter capture would be tricky. Is there such a system currently in use for any use case? Only thing I could find with a quick search is this system developed in the 70s.

Correcting myself. There is a system developed by NASA for space probe recovery.

One thing I disagree with that picture is that the parachute has to be parafoil rather than round parachute. Capturing something coming down straight is quite difficult and dangerous. It has to be under parafoil with good forward speed so the helicopter can come up from behind, match the glide and then capture with more ease.

Though confirming that the Falcon upper stage would not be reused, Shotwell was optimistic about a redesign for reuse of the payload fairing.

“We’re working on that,” she said. “It’s such a shame. This hardware is so expensive, you want to save everything.”

Not the answer you're looking for? Browse other questions tagged spacex falcon-9 reuse fairings or ask your own question.

19
Why is Falcon 9's fairing so big?
20
What are the two bright objects separating from the Falcon 9?
15
What makes a payload fairing so expensive?
1
Would having the Falcon fairing reconnect be possible/beneficial?

12
How many 1st stage boosters will SpaceX settle for, for its LEO/GTO fleet?
10
How vulnerable could space launch vehicles be to a "lone gunman"?
7
Falcon 9 fairings stability on reentry
44
Why can't Falcon 9 fairings touch the water?
4
Are there any at least somewhat authoritative estimates of how long it will be before people will land on Mars and setting up camp?
9
What happens to payload fairings of GEO launches?
1
How long it takes for the Falcon 9 payload fairings to reach the sea?
29
Isn't Starship way too big?
7
Could SpaceX deliver the Interim Control Module to the ISS?