I want to get an idea of how long the falcon 9 rocket accelerates and at what g level. Ideally a plot of gs vs time. I see various statistics like specific impulse and thrust and weight, is there a way to calculate average accel from the basic rocket data? I suppose average thrust and weight gives you average accel...

From the telemetry link mentioned by @jkavalik, someone posted an interesting graph 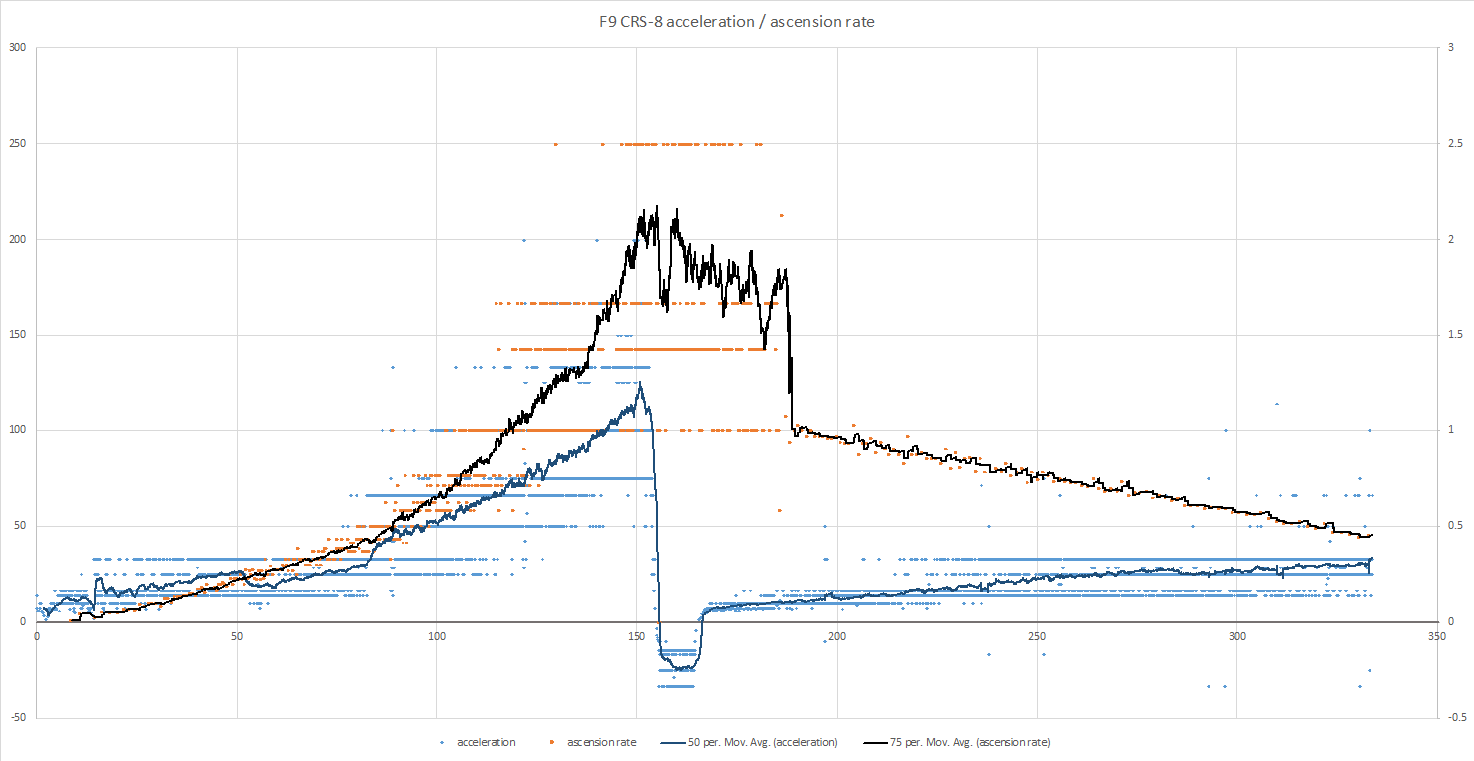 The blue line here is the acceleration of the rocket. It ramps up as fuel is consumed. There's a dip from about 55 to 85 seconds where I believe the engines are throttled back in anticipation of "max Q", the point of highest aerodynamic stress. The acceleration then increases continuously until the first stage shuts down and separates. There's a few seconds of free fall before the second stage ignites, and it likewise ramps its acceleration up over time.

I'm not sure what the units are supposed to be; the data the creator was working from was given in kph rather than m/s. The Falcon 9 Manual says that full-weight payloads will take a maximum of 6g axial acceleration. so the peak of the blue line should be something under that, probably in the ballpark of 5g.

Not the answer you're looking for? Browse other questions tagged orbital-mechanics spacex falcon-9 orbital or ask your own question.

13
What are the challenges in Falcon 9 "full thrust" (v1.2) with densified propellant?
8
What difficulties will be faced modifying the Falcon 9 FT, so to have better and easier landings of the 1st stage from a GTO mission?
14
What was the first time a "re-used booster" was used to put a payload into orbit?
3
Acceleration / inertial / astrophysics
16
Why was TESS' launch window open for only 40 seconds per day?
1
Quick and dirty way to estimate flight times for constant acceleration rockets
4
Calculating a de-orbit burn, is this problem written correctly?
4
Ratio of low-thrust slow spiral to Hohmann transfer $\Delta V$?
2
Converting Keplerian coordinates into Latitude and Longitude
3
If a company/agency has already developed a kerolox/hydrolox rocket, is it wise for them to switch to an all-methalox rocket? (to lower costs)