How was dust-mitigation addressed during the Apollo program?

Dust mitigation in the context of manned landings is now a rather vital topic of research and testing, but back in the days of Apollo it was a fairly new problem. 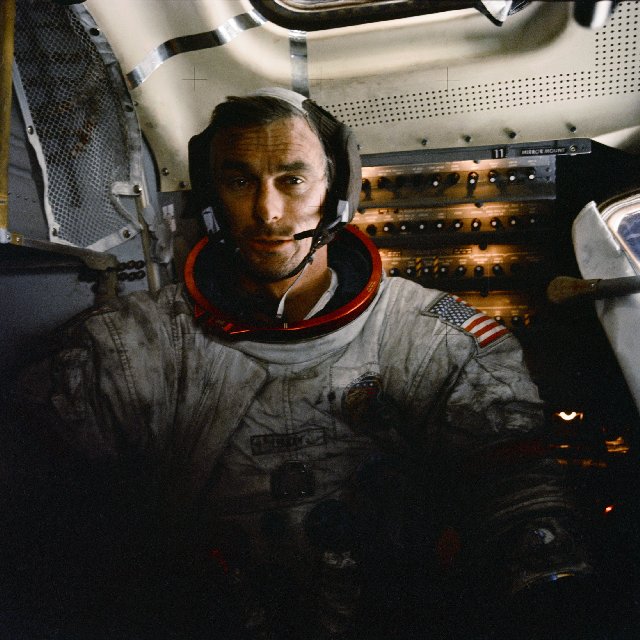 'Dusty' Gene Cernan inside the LM on the Moon during Apollo 17 (Harrison Schmitt / NASA, 1972)

Dust is a complex problem. It cloaks filters, reduces the efficiency of seals, can theoretically cause shorts, can be inhaled, electro-statically sticks to almost everything ...

What were the initial expectations with respect to dust prior Apollo 11? How was dust addressed for this mission? What were notable effects of dust on the spacecraft, instruments and suits? What was eventually changed for later missions and why?

Bonus question: There are plenty of photos of how Apollo astronauts looked liked after their EVAs. Yet, I have not found any close-up photo of the floor of the LM or its hatch after EVA. This would be really interesting.

There was an expectation that there would be some dust, however, there were a number of surprises associated with this dust. Apollo astronauts tried to remove dust using vacuums and brushes. This failed to work because the dust is electrostaticly charged, it sticks to everything. The summary of all of the mission in the NASA report quite quite interesting, namely:

The Apollo 11 crew vacuumed suits, samples and equipment in the LM* before transferring these items to the CM* . Because the suction was low, this was a tedious job. The vacuum used in Apollo 12 did not remove dust from the space suits, but was used to brush dust off sample boxes. Dust and debris in the LM impeded transfer operations and although the gear that was transferred was filthy, very little dust was transferred to the CM. In Apollo 14, the vacuum performed satisfactorily and very little dust was transferred to the CM. The cabin fan filter cleaned the atmosphere well. The vacuum and the cabin fan used in Apollo 15 worked well. During Apollo 16, the vacuum cleaner and cabin fans failed resulting in severe CM contamination. This was exacerbated by a decision to postpone LM jettison. The CM filled up with dust and rocks immediately and dust coated all the surfaces within an hour. The Apollo 17 tunnel transfer went smoothly. A small amount of dust was transferred to the CM; however, the cleaning control system, combined with running the vacuum cleaner in the LM kept the CM air clean.

The main thing that was done differently in later missions was procedures. For instance, Apollo 15 reported the following in their mission report:

“The first order of business after we got repress was to go through the checklist and do the EVA post and try and come up with a plan on how to handle all the dirt in the cabin. We were pretty dusty. We had planned prior to the flight to take the jettison bags and step into them with the suits to keep the lower portion of the suit isolated from the rest of the cabin. Our legs from about thigh down were just completely covered with dirt. I guess the dust brush worked fairly well. It got most of it, but we were still pretty dirty.

The dust floor was cleaned by wetting a rag, caking the dust into mud and picking it up in the rag; however, there was no way to remove the dust from the Velcro on the floor. Since the Velcro does not restrain the crew to the floor in zero gravity, it is not needed.”

You knew you were in a very heavily infiltrated atmosphere in the LM because of the lunar dust. I don’t know how much lunar dust previous flights had, but I think we saved a great deal of grief by sweeping all the dust we could find in the floor into the holes and putting our tape covers over those holes. I think that had to help a great deal. There was an awful lot of dust on the floor that we didn’t see.

The bottom line, each mission was incrementally better, but for the most part, it didn't cause many issues, with the exception of an episode of Hay Fever. Long term no doubt it would have caused issues, but there are plans put in motion to address this for future missions.

For reference, see Wikipedia and the NASA constellation report,

Not the answer you're looking for? Browse other questions tagged the-moon apollo-program lunar-landing dust or ask your own question.

33
Why didn't the Apollo 11 lander blow the dust away? (or why does it look like it didn't)
36
What would it feel like to be in a Martian dust storm?
24
How exactly did the floor of an Apollo LM look like after EVA(s)? Seeking photo!
7
Could you "hose wash" a space suit on the Moon or Mars?
3
How did they sweep dust on the moon from inside the Apollo Lunar Lander?

33
Why didn't the Apollo 11 lander blow the dust away? (or why does it look like it didn't)
3
How did they sweep dust on the moon from inside the Apollo Lunar Lander?
8
Why did moon dust not cause problems on Apollo during the return flight from the Moon?
24
How exactly did the floor of an Apollo LM look like after EVA(s)? Seeking photo!
8
How does the Apollo LM ascent guidance program P12 actually work?
2
What joints of Apollo 17 space suits did moon dust get into, making the astronauts arms difficult to move?
7
How were the "dust recepticles" installed on the Apollo 17 LM floor?
16
Apollo altitude vs rate-of-descent schedule
4
How was an emergency landing site at Diego Garcia used during the Apollo program?