How were vibrations supposed to be handled in an Ares I?

The basic concept of an Ares 1 consisted of a five-segment SRB and some liquid-fuelled upper stage. The SRB was derived from the four-segment Space Shuttle SRBs. A similar concept was later promoted under the name 'Liberty rocket' - my question applies equally to this one. 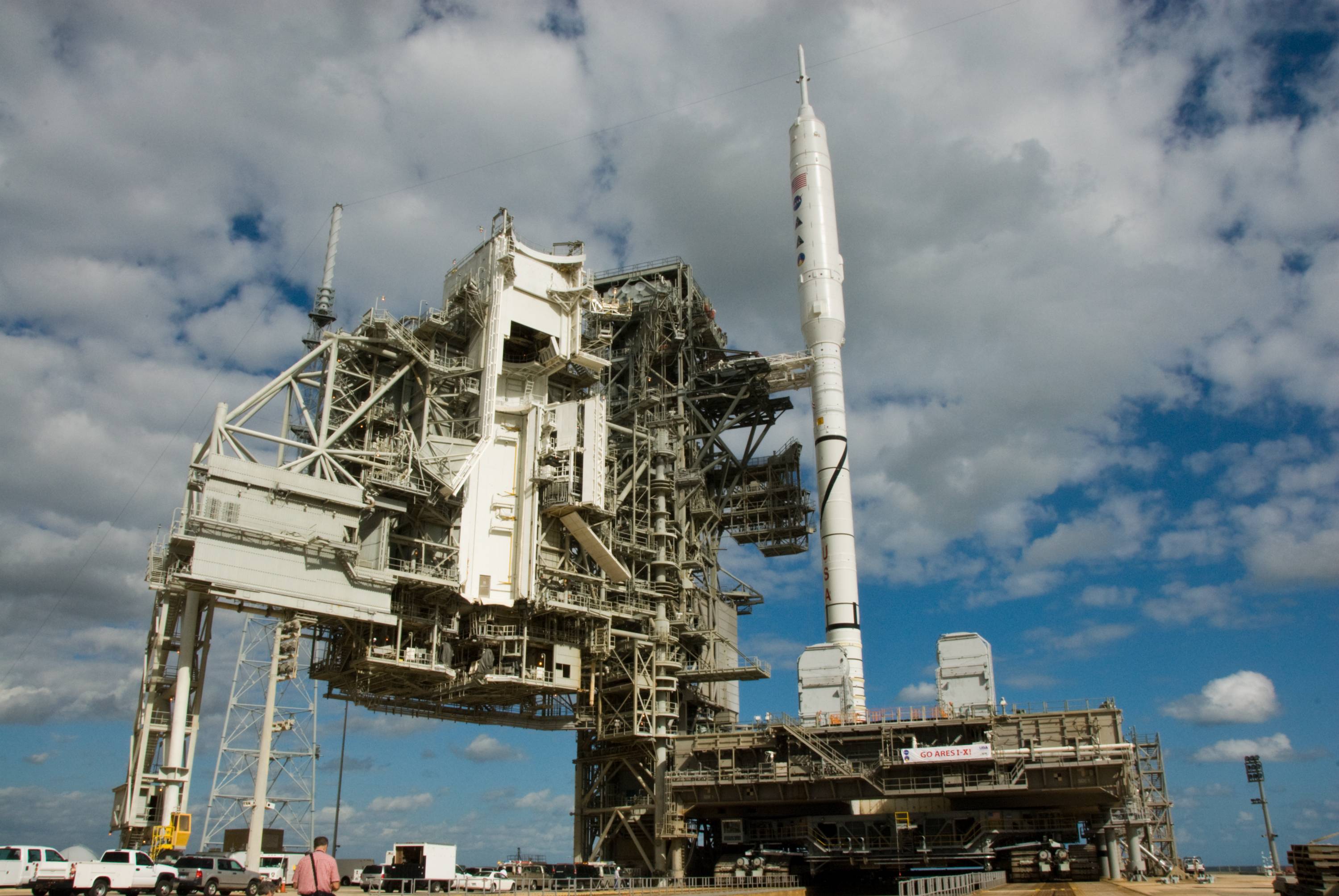 The Ares-1-X vehicle, a design concept demonstrator, sitting on launch pad 39B at the Kennedy Space Center (NASA, 2009)

I keep wondering how this was supposed to work with respect to vibrations caused by the SRB. If you look at cockpit views recorded during Space Shuttle launches, you can see that the astronauts are shaken rather violently. Even professional astronauts, flown in space multiple times, described it as "highly unpleasant necessity".

A Space Shuttle combined with its external tank had a rather high mass, thus absorbing significant portions of the vibrations. In case of the Ares 1, a rather small upper stage was supposed to be the only thing between a single massive SRB and the astronauts. How was this envisioned to work - allowing for an at least bearable ride into space? Are there any good sources, which explain ideas, concepts, designs, numbers or tests in this context?

(At the end of the of the constellation program, shortly before it was cancelled, I had the opportunity to talk to engineers from Lockheed. By this time, Lockheed was the main-contractor for Orion and its service module. I asked precisely the same question. They replied "We are working on it ..." In other words, it was an issue of significance.)

NASA was the most concerned with the thrust oscillation happening near and on depletion of the first stage fuel, roughly 105-115 seconds into the flight after liftoff and just before first stage separation (see Ares I-X Mission Profile below), as it was shown by the computer modeling and early design analyses of the Ares 1 rocket. 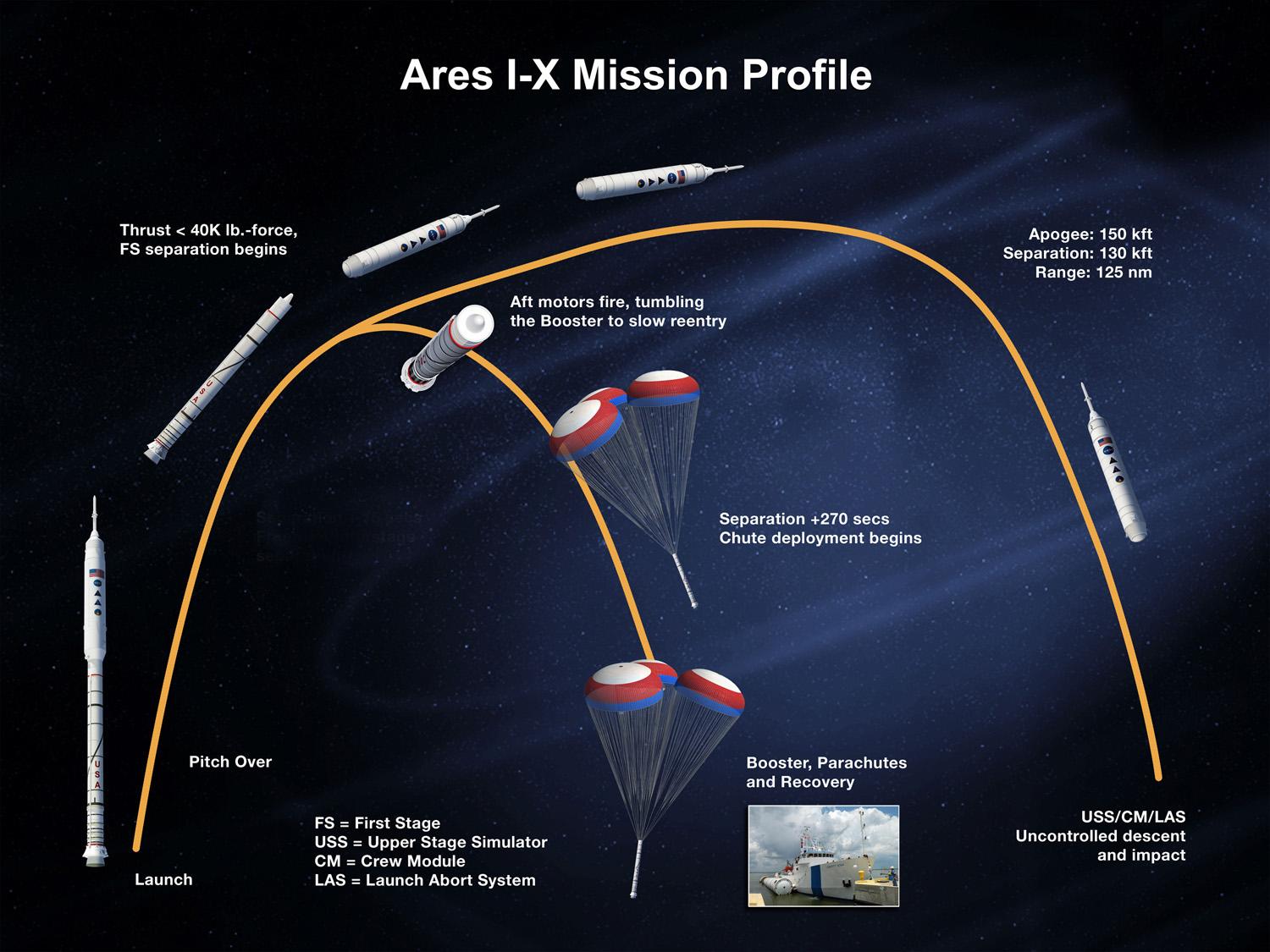 This so-called thrust oscillation occurs as solid fuel in the first stage depletes, leaving a long, empty shell that takes on the characteristics of an organ pipe, and resonates at frequencies between 12 and 14 hertz. The second stage of the rocket and the Orion spacecraft atop it would naturally dampen the resulting pressure pulses, which would essentially jackhammer the astronauts and make it nigh impossible for them to read console displays and respond accordingly during that only roughly 5 seconds long, but crucial interval of the ascent phase.

This was not ideal, so NASA engineers looked into many possible ways to mitigate this thrust oscillation at that time (probably matching the time of that "We are working on it ..." reply that you got). Some of the proposed solutions included tuned mass damper around first stage parachutes (active tuned mass or harmonic absorbers / dampers), reaction control system (a spring-and-damper ring separating the first and second stage of the rocket), active pulse RCS (Reaction Control System, actuators acting like shock absorbers and added to the bell-shaped aft skirt at the bottom of the rocket), and so on: 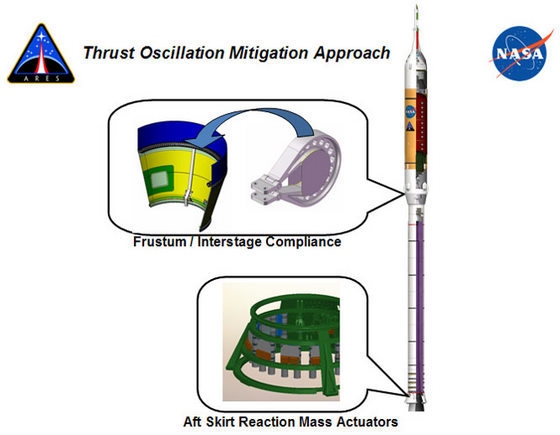 Engineers were also looking to use a passive "compliance structure", a spring-loaded ring detuning the stack by softening the interface between the first and upper stages, while preserving lateral stability in the Ares 1 design concept. Proposals are described in more detail in this Ares I Thrust Oscillation mitigation options head into trade study from April 29, 2008. 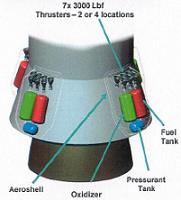 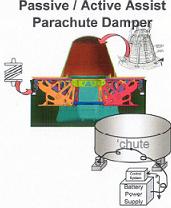 This concept was expected to reduce the G-forces by vibrations on the astronauts from about 0.7 G’s to 0.25 G’s (on top of 4 G’s from acceleration at that stage of the ascent). Needless to say, all this would add significant costs to designing and constructing Ares 1 first stage, stage engine, first and second interstage, and the crew module (MPCV, Multi-Purpose Crew Vehicle) adapter. 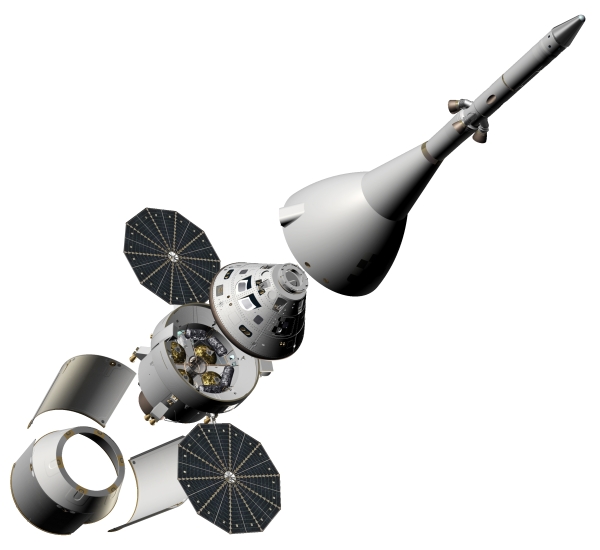 The Orion Multi-Purpose Crew Vehicle (MPCV). The MPCV includes both crew and service modules, and a MPCV adaptor.

All this was happening around the times of announced budget cuts for the next fiscal years, so they started looking at other, cheaper solutions. And good that they did, too.

NASA turned to the Human Factors Division, among them their asst. chief Human Performance, Brent R. Beutter and people from the NASA Ames Vibration Lab. They have fast realized the vibrations were limited to a rather narrow frequency range between 12 and 14 Hz. This lead them to the idea of strobing crew displays, tuned to the frequency of launch vehicle's in-flight vibrations as detected by accelerometers attached to the chairs. 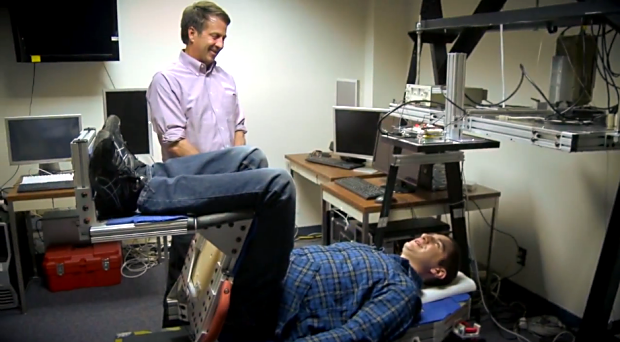 Oscillating display tested with vibrations of up to 0.5 G’s, by Brent R. Beutter, NASA asst. chief Human Performance and Brent
Rose, Gizmodo stuff. Video of this demonstration is available on YouTube.

A few cheap and cheerful circuits later, the flight displays was perfectly legible even at predicted vibration acceleration up to 0.7 G’s.

Each operator was asked to locate the highlighted (magenta) box in a display consisting of a six-by-six matrix of boxes, read and process the contents of the middle row of digits, and then make a two-alternative forced-choice (2AFC) based on the row's content. 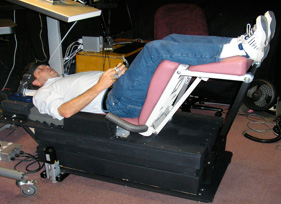 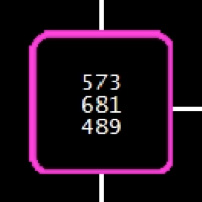 Task error rates in the main condition, shown below, suggest that vibration levels above 0.3 g (0-to-peak) may meaningfully compromise the processing of alphanumeric symbology in the currently anticipated Orion display viewing conditions, particularly if the font size is small. 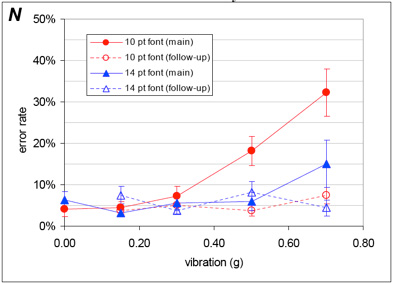 And this is the story of how NASA solved a multi-hundred-million dollars problem for maybe a few ten thousand bucks.

This article reviews the vibration dampers considered. The previous answer didn't mention the LOX damper. As the linked article mentions, it channeled movements in the liquid oxygen. I believe the fluid dampers in skyscrapers work in a similar way to reduce structural oscillations.

I worked stresses on the Ares I, and my supervisor told me that the expected astronaut discomfort was a significant driver to seek mitigation.

Not the answer you're looking for? Browse other questions tagged nasa vibration constellation-program canceled-project srb or ask your own question.

13
Why are there so few solid rocket satellite launchers?
12
Do rocket engines have shock absorbers?
10
What engineering problems was Ares I facing at the time of its cancellation?

9
How effective would the ARES aircraft be?
7
Why was Ares-1 based on the SRB?
10
What engineering problems was Ares I facing at the time of its cancellation?
14
How many Solid Rocket Boosters were there in the Space Shuttle program?
9
Why were Solid Rockets chosen for the SLS
8
Why did NASA design the SLS do the job of both the Ares I and Ares V?
19
How were the Space Shuttle SRBs ignited? (with what?)
8
NASA SIM (Space Interferometry Mission) - how mature technically it was at the moment of cancellation?
10
How were STS SRBs disassembled