Could fueled boosters be launched separately from the primary payload?

Is there any existing technology for attaching fueled boosters to a spacecraft? (not for a space station)

Space assets (e.g. module, spacecraft or satellite orbiter) could be boosted to place in earth orbit first, then additional fueled boosters (from a second launch) could be docked to this space asset for a trip to the moon or Mars, etc.

To reiterate, I'm interested in launching fuel vessel boosters in a second launch and docking these fueled boosters onto a spacecraft orbiting Earth.

Does the technology exist? Yes, and it has since it was clear that docking was reliable enough to be used in the Apollo project. When the Lunar Module ascended from the Moon, it docked with the CSM. That is by most common measures to dock with a booster. After all, the main purpose of the SM was to insert the Apollo stack into lunar orbit, and then depart towards Earth. That is very much a booster role. Through hundreds of visits to space stations, docking is made an everyday and safe operation. We have the technology.

Does the spacecraft exist? No, not at the moment. While for example space station resupply craft, like Progress, have engines, and can be used for station re-boost, they are not dedicated boosters by themselves. Apart from space stations, docking is not much used. Today, we have no such boosters. Building them is however not an issue if needed.

The scenario you describe is very close to the concept of the Parom space tug, a planned component for Clipper, but may also be used for in-orbit cargo transportation. We have yet to see how many of those plans will be realized. 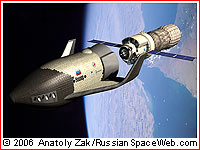 As a historical reference, the Agena target vehicle used by Gemini, was among other things also used for propulsion, for example for setting the at-the-time record for being farthest away from Earth.

Not the answer you're looking for? Browse other questions tagged spacecraft or ask your own question.

13
What is the farthest a spacecraft has traveled away from earth?
11
Have any spacecraft been launched or proposed to make a survivable close encounter with the Sun?
26
What is the fastest speed ever reached in space travel as measured from the point in space from which it was launched to its current/final position?
3
When is the PTK NP spacecraft likely to be launched?
22
What is the general shape and size of a space probe, and how are they launched?
4
What might be a viable avenue of propulsion research in aiming for mission delta-V north of 100 km/s?