What viewing angles does the Hubble Space Telescope use during its orbit in LEO, avoiding the Sun and Earth?

HST is in Low Earth Orbit. It can of course not look through Earth which at that low altitude covers almost half of the sky. As far as I know it is also never pointed even remotely close to the direction of the Sun for safety reasons. When the HST is in between the Sun and the Earth, once every 90 minutes, what can it look at then?

Observations cannot take place when the telescope passes through the South Atlantic Anomaly due to elevated radiation levels, and there are also sizable exclusion zones around the Sun (precluding observations of Mercury), Moon and Earth. The solar avoidance angle is about 50°, to keep sunlight from illuminating any part of the OTA. Earth and Moon avoidance keeps bright light out of the FGSs, and keeps scattered light from entering the instruments. ... There is a so-called continuous viewing zone (CVZ), at roughly 90° to the plane of Hubble's orbit, in which targets are not occulted for long periods.

Some older HST Primers have an exact value of prohibited angles (but they are not listed for cycle 24): ftp://ftp.stsci.edu/cdbs/perigee/jyounger/cp_primer/Ch_2_Systemoverview5.html#1876818 - Hubble Space Telescope Primer for Cycle 11, 2.4 Pointing Constraints

the telescope does not observe targets that are

180 degrees of the sky is occupied by the Earth. 180 degrees of the field of view will cause sunlight to reflect in the optics of Hubble, causing unrecoverable damage. Nothing left then. The "downtime" is usually spent re-targeting and changing the observation setup. Even though non of the angles are as great as 180 degrees, the optics still requires a "shadow zone" margin of significant width, making the avoidance zone hemispherical in practise. 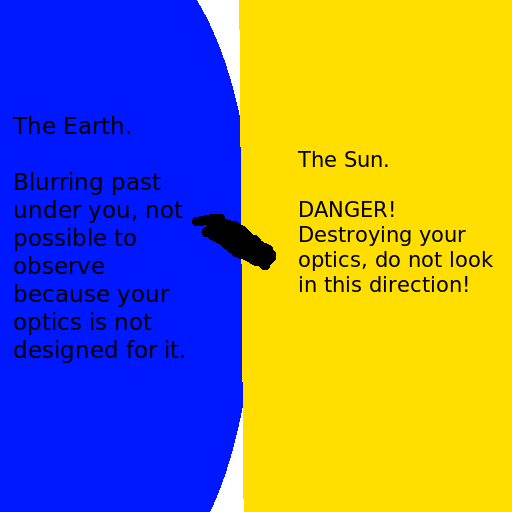 NOTE: This answer is actually wrong in three different ways.

Not the answer you're looking for? Browse other questions tagged observation hubble or ask your own question.

10
Will SMAP produce predictable satellite flares visible to the naked eye from the surface of the Earth?
4
Does the Hubble telescope use a "simple" PID-controller for its pointing control system?
13
Would it be possible for SpaceX's BFR to return the Hubble Space Telescope to Earth in the future?
41
Why are so many space telescopes placed in LEO instead of at Lagrange Points? And why do we hear about Hubble more than any Langrange-orbit telescope?
20
Could Hubble observe the night side of the Moon?
5
Why does this photo of the Hubble Space Telescope look so weird?
0
Why do these two Hubble Space Telescope star cameras point in nearly the same direction, and what's the other window for?
4
Would it have been cheaper and/or faster to put a James Webb-like Space Telescope on a balloon instead of a rocket?