What are these structures on the Lunar Ranging Retro Reflector (LRRR) arrays for?

In Local expansion measured, near zero via Lunar Ranging - what about deep space probes? I used images of the retro-reflector arrays that were left on the moon by Apollo 11, 14, and 15. The Lunar Ranging Retro Reflectors (LRRRs) are there for Lunar Laser Ranging.

The arrays and their supporting structures appear to be significantly different from each other, suggesting design improvements or slight repurposing. Looking closer at the images, I see auxiliary structures on each one. What are all these things and how were they used?

Some appear to be sun-dial-like (for want of a magnetic field), and at least one looks a little like a bubble level with a vertical tab next to it. I'm pretty sure B is not there to blow moon dust off of the array :) - it could maybe be an infrared thermometer, but was there telemetry? See Lunar Laser Ranging Tests of the Equivalence Principle, page 8 for a discussion of the relevance of the widely cycling temperature of the array - for Equivalence Principe (EP) experiments it's necessary to measure throughout the entire 27 day long lunar day-night cycle.

Only one shows the faces of the reflectors directly, and they appear to be corner-cubes, which, individually at least, don't necessarily have to be pointed very accurately at all in every-day use, although I imagine an antireflection coating might have a cone of best performance. 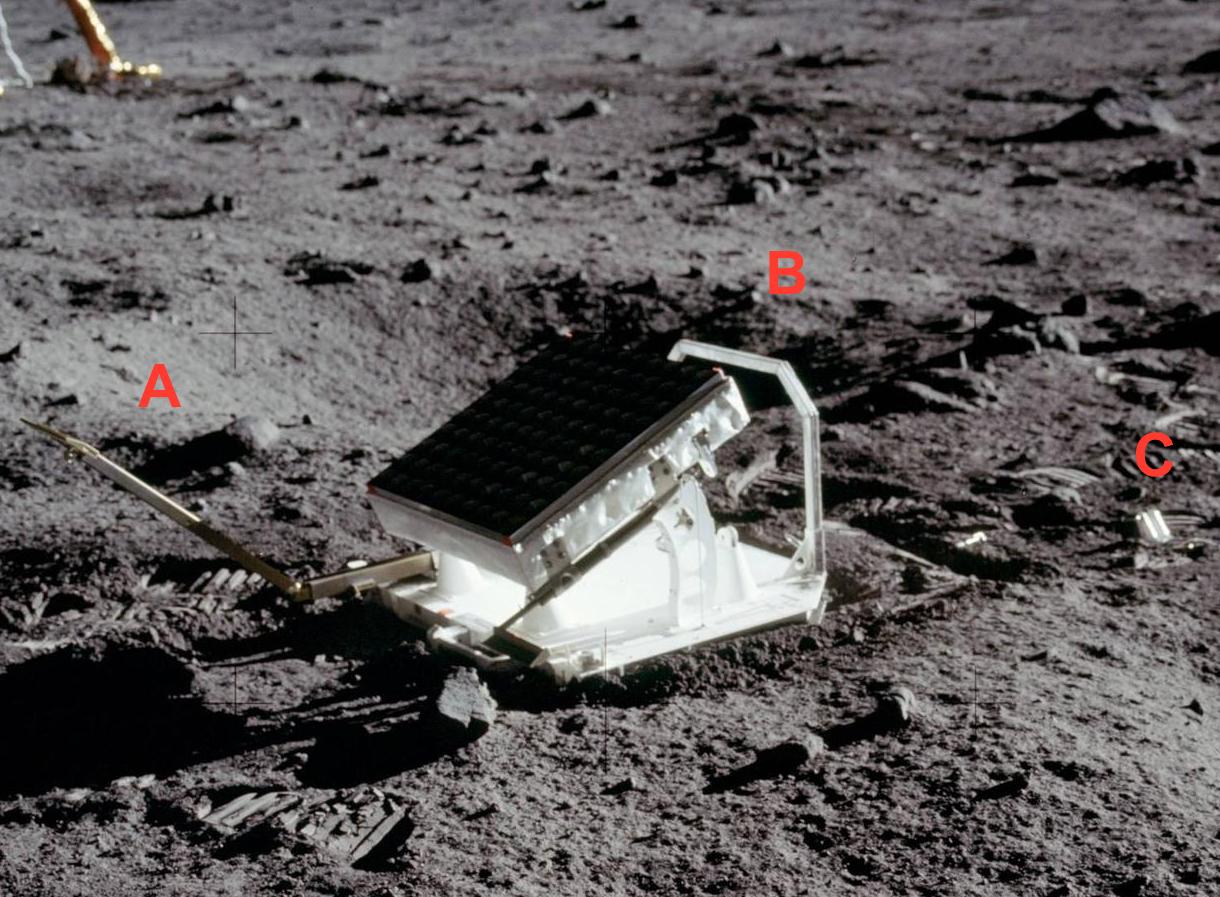 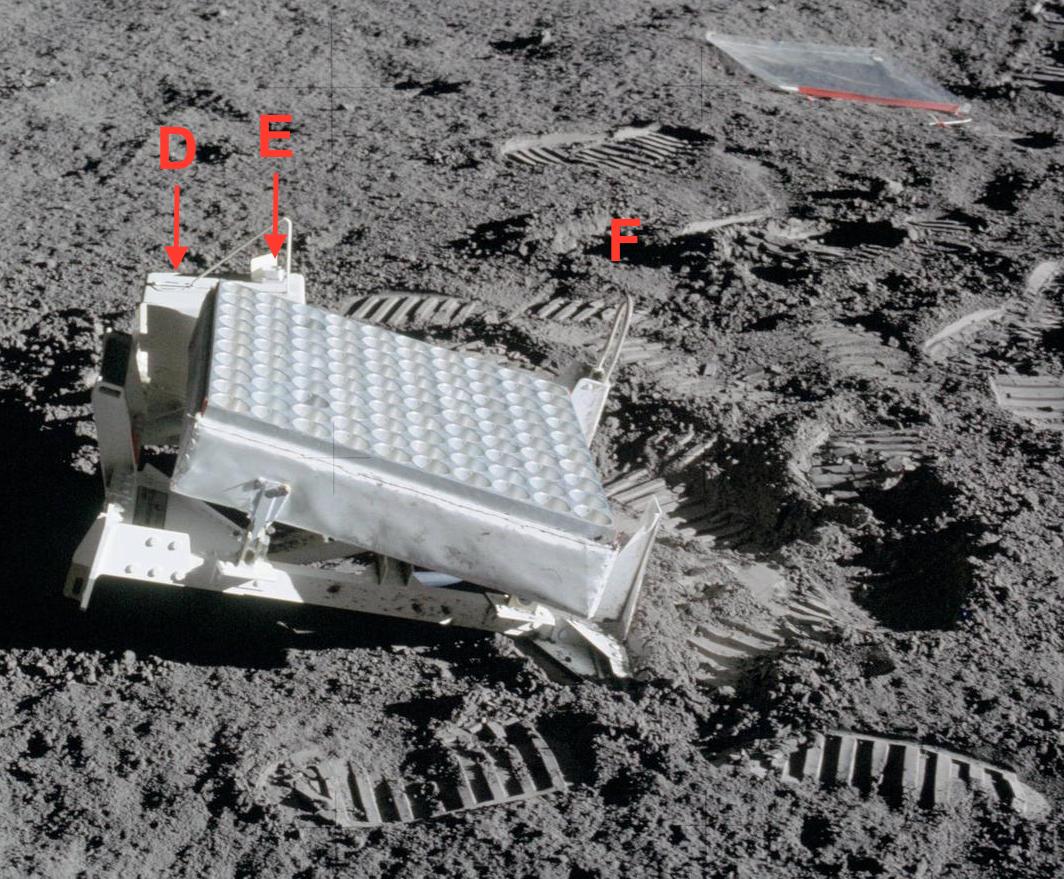 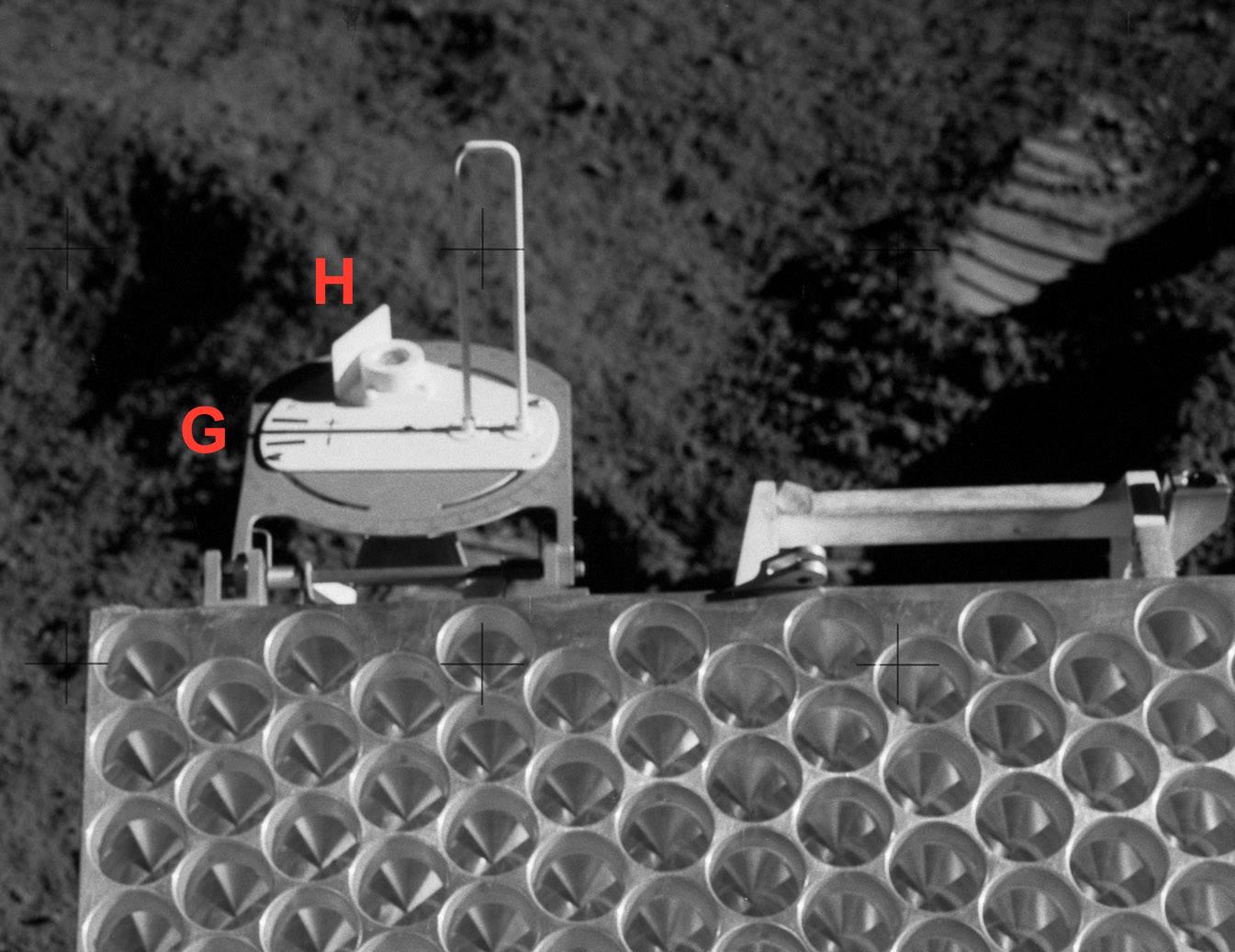 After reading the answer by @Andy and the linked EASEP Handbook For Apollo ll Flight Crew, I've included Table 4.1-2 here as well. 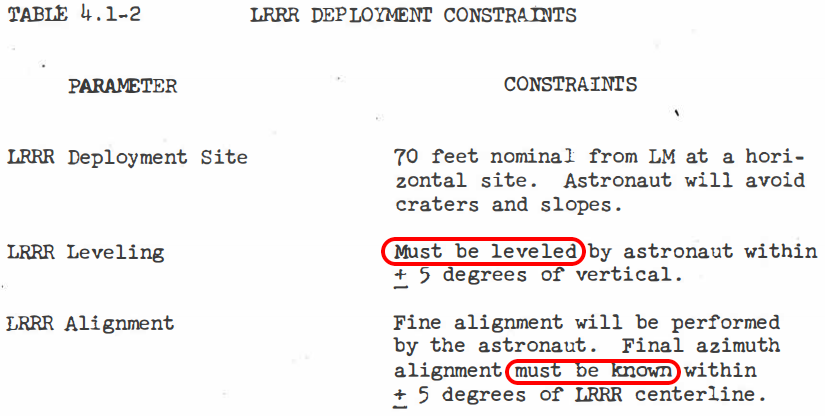 The Apollo 11 EASEP handbook gives basic information on the first version. Of the LRRR, it has just two pages of text...

There are some (poorly reproduced) images labelling the main parts. It's correct there is a sun "compass" and a level. The large part labelled "B" in the question is a rear support, presumably so the folded device could be stood on the soil during the deployment process.

The part labelled "A" in the question is a handle the crew may grab while aligning and setting up the device.

There wasn't any telemetry by the way, this handbook states the experiment was totally passive.

The Apollo 15 version was larger (and has a better manual). Its level indicator has rings for 5, 2 and 1 degrees. 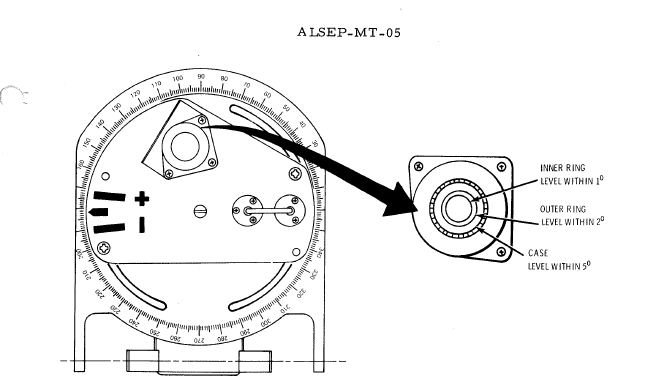 (Note nothing I've described here gives the actual accuracy of the reflector prisms, so this is only a half-answer.)

(And a note: various documents mention a "bubble", but I gather at least some lunar equipment in fact used a small ball in a cup. This might have been to avoid having breakables, or just for better visibility. It's not clear what type was used in the LRRR.)

Not the answer you're looking for? Browse other questions tagged apollo-program lunar-landing measurement laser or ask your own question.

48
What would be the (most difficult) challenge to make a 10,000 year satellite?
43
Is pinging the Moon with a laser as shown on "The Big Bang Theory" possible?
5
Who does these mesmerizing simulations of the phases of the Moon? And how?
13
What is this unlikely-looking contraption ("plutonium battery and scientific equipment") they're making Jim Lovell cary around a parking lot?
8
What is the current record for the farthest detection of a "dead" spacecraft?
0
Why they left a mirror and not a camera on the moon?
5
How many sundials, Sun compasses and gnomons are there on solar system bodies?
3
Are there examples of spaceflight equipment being redesigned to remove right hand bias? (To make it less difficult to use left-handed)
0
Local expansion measured, near zero via Lunar Ranging - what about deep space probes?
1
What exactly is a "Next Generation Lunar Reflector"? Difference in design and performance?
See more linked questions

12
What did Apollo need the crewed Command Module for?
25
How did Apollo-12 manage to land next to Surveyor-3? First "Space-Tourists"?
1
Should there be black crosses from the Réseau plate in this Apollo mission photograph? If so, where are they?
3
How to get an initial setting of the range gate for a Lunar Laser Ranging using a new Retro Reflector for the first time?
24
Was it really necessary for the Lunar Module to have 2 stages?
1
Why does LRO's laser altimeter telescopes use lenses instead of mirrors?
1
What exactly is a "Next Generation Lunar Reflector"? Difference in design and performance?
1
When they shoot lasers at the Moon for ranging, what is the shape of the beam?