Is it possible to energize a steam rocket enough to go to space?

So I've been making small steam rockets and I was just wondering if I had a huge power plant connected to an electrical heater inside the rocket and heated enough to bring the pressure and temperature to a super heated state or even plasma will I be able to shoot it out into space ?(suppose we have a super indestructible material that can hold the water it). How much energy do we need?

Interesting thought. You'd need to store the steam at high pressure. The highest pressure used for (helium) gas cylinders is 1000 bar, so if we use that as the limit...

We need the phase diagram for water: 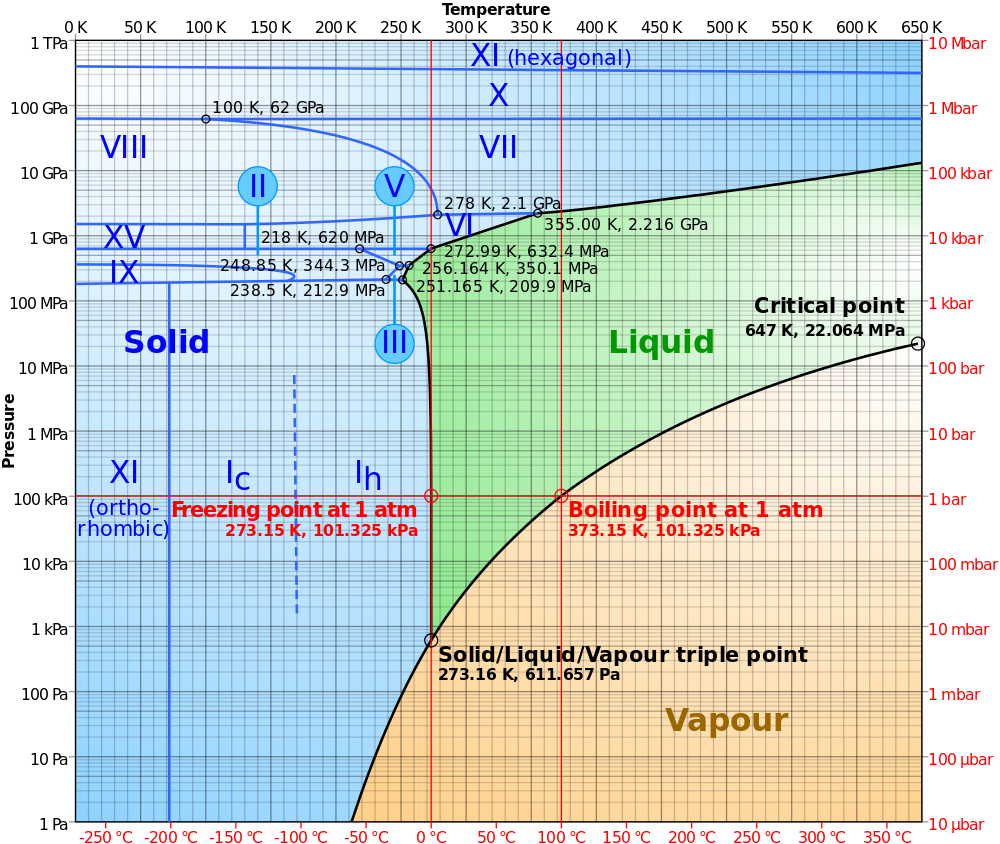 At 1000 bar, water exists as a liquid. At the nozzle, the water would flash to steam. So far so good. But how much energy can we get from this?

The difficulty of doing this by storing steam in a pressure container is already covered in the answer by Hobbes.

However, it is quite a bit easier if we can boil the water and generate steam in-flight. Apart from the boring way to do this, to burn hydrogen and oxygen to get water, as in a regular chemical rocket, there is another interesting possibility:

Chemical reactions have a very high energy density, so finding something else that can outperform regular rockets is difficult. But there is one other option, Nuclear thermal rockets.

Passing a stream of propellant through a reactor to heat it is not something revolutionary. In fact, working prototypes of nuclear rocket engines where built 50 years ago, by both the US (NERVA), and the Soviet Union (RD-0410).

Although hydrogen is the most commonly discussed propellants for an NTR, water is perfectly fine. Water has an $I_{sp}$ of 420s, a bit less than a LOX/LH2 engine, but better than LOX/methane.

Nuclear rocket engines are normally not considered for the first stage of a launcher, because they have a relatively low thrust to weight ratio. The thrust is in fact improved by using water, as the approximate relationship between thrust and $I_{sp}$ at constant reactor power is that $I_{sp} \cdot Thrust = constant$.

Take a look at hydrogen peroxide rockets. H2O2 decomposes in the presence of a catalyst into water (H2O) and free oxygen (O2) at very high temperatures (300-600 C). Water at that temperature is steam, and acts as a reasonably good propellant by itself, though has a low ISP of about 161. As an example, it was the propellant for the Bell Rocket Belt.

The most successful H2O2 rockets use a "bi-propellant" blend of some sort of hydrocarbon (kerosene, alcohol, etc.) mixed in some proportion with the peroxide. This cocktail is passed over or mixed with a catalyst (depending on if its solid, such as silver, or liquid, for which I can't think of an example; potassium permanganate, perhaps), the hydrogen peroxide decomposes in to steam and free oxygen, the free oxygen mixes with the hydrocarbon at the high temperature and ignites, producing a secondary reaction of heat, and it all gets directed out the back of the rocket nozzle to produce thrust (phew!). According to the Wikipedia article on one of these engines, the decomposition with kerosene goes like this: CH2 + 3H2O2 → CO2 + 4H2O

Not the answer you're looking for? Browse other questions tagged rockets water or ask your own question.

7
Could moon ice be used to fuel a steam powered jetpack for EVA in space or high altitude exploration on the moon?
3
Could pressurized steam be an effective propellant for satellites?