What does “supersonic large amplitude ID maneuver PTI” mean, and what does a tumble motor do?

In this question I linked to a YouTube video of the Ares X-1 launch. You can start listening at 02:00 for the point where these are mentioned:

What do these mean?

"tumble motors" were solid rocket motors similar to the Booster Separation Motors used on regular shuttle SRBs, but mounted in such a way to cause the booster to tumble in an attempt to prevent it from stabilizing aerodynamically on the downward leg of the trajectory. (from the "first stage" part of this article) Normal shuttle SRBs weren't fitted with tumble motors, but early shuttle External Tanks (ETs) had a tumble valve which was supposed to serve the same purpose for the ET by venting residual gas in a radial direction. The valves were problematic and were deleted after a few flights1, apparently without much effect. Tumbling is desired during reentry to help ensure that the entry trajectory is predictable "since satellites during a tumbling re-entry generally do not produce significant average lift forces acting against gravity [and therefore] a simplified ballistic re-entry approach can be used to model the trajectory and flight dynamics." (from Safety Design for Space Operations, Chapter 9, Re-entry Operations Safety)

A PTI is a Programmed Test Input, used throughout the Shuttle program to introduce small preplanned deviations into the control system or trajectory and take data on the resulting response of the system. The specifics of the PTIs on this flight are described in this paper. There were 3 called out on the sound track, all are in the paper. The one you mention is described as

... a large amplitude (nominal peak 0.35 degree) sweep from 75-85 seconds and is intended to identify aerodynamic response as well as control stability margins.

Much, much more detail is available in the paper if you are interested. I've excerpted one graph from the paper showing some actual trajectory data versus what it would have been if the PTI hadn't been incorporated. 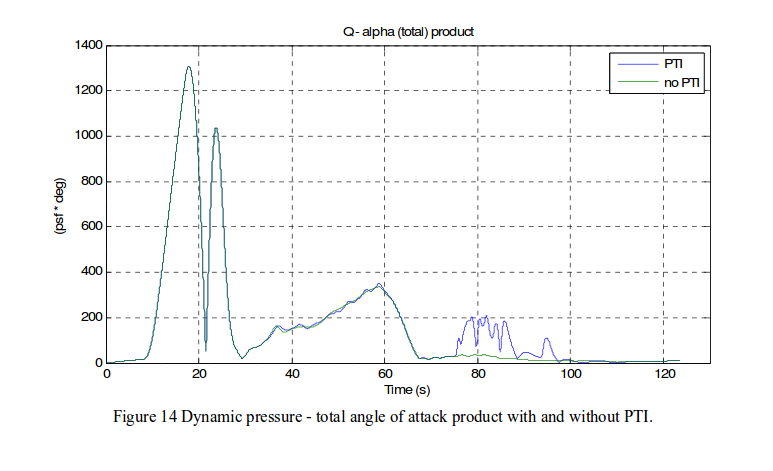 Not the answer you're looking for? Browse other questions tagged terminology solid-fuel srb or ask your own question.

15
What are the conditions for re-entry of an object in a (highly) elliptical orbit?
6
Is it unusual to vector the thrust from an SRB?
6
Do each of the fairing halves now use thrusters post-deployment? How does that work?
6
How did the Apollo Service Module reenter?
5
Why did the Space Shuttle dump excess fuel from the external tank?

16
Can a solid first stage compete with a liquid fueled first stage?
10
How are SRBs and solid rocket motors transported safely? Do they ever end up on trucks driven down public highways?
13
Opportunity's last tau was 10.8; what does that mean and how is tau defined and measured?
12
Features seen on the Space Shuttle's solid booster; what does "LOADED" mean exactly?
10
What is and what isn't ullage in rocket science?
0
What is the difference between "body drag", "frictional drag" and "pressure drag" for astronaut or aerobot atmospheric locomotion in microgravity?
2
How do RAAN steering increase the launch window?
2
What do "initiate dragon safe haven" and "close all centerline hatches" and "next two crossings" mean?