I was watching the jcsat-14 launch, and I noticed the vehicle was slowly slowing down when 2nd stage engine was off even at 250+km. Is it because of atmospheric drag or pulling force of gravity?

orbit atmospheric-drag
Share
Improve this question
asked May 6 '16 at 5:57

Thats because when the burn ended, the stage was near the lowest point (perigee) of its very elliptical orbit 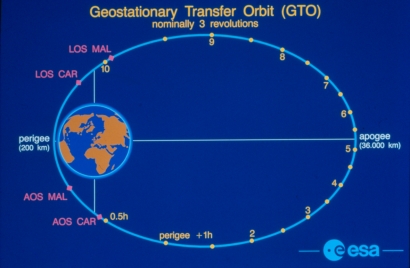 and going "up". So gravity is slowing it down until it reaches the highest point (apogee). Then it will start gaining speed again as it "falls" closer to Earth.

For elliptical orbits the speed is not constant, but it is lowest at the highest point and highest near the lowest point.

Imagine sending a ball rolling uphill - it will slow down while going up and then when it goes over the top, it accelerates again.

Not the answer you're looking for? Browse other questions tagged orbit atmospheric-drag or ask your own question.

5
Moving object in space
6
Is there drag inside a Space craft?
13
Does SpaceX put Falcon 9 2nd stages carrying geostationary satellites into a temporary sub-orbital trajectory before the second burn?
2
Atmospheric drag vs. atmospheric heating. Which occurs first?
1
Atmospheric drag effect
7
Orbital propagation: atmospheric drag
9
What is typical lifetime of GTO rocket stages before reentry?
4
When do aircraft become solarcraft?
6
Exactly how “Ferrari-like” was GOCE? Was its drag coefficient as low as the car's?