Why rotate the Falcon 9 2nd stage after deployment?

Towards the end of the JCSAT-14 live webcast, after the satellite was deployed, we could see small thrusters firing on the second stage, starting to rotate it: 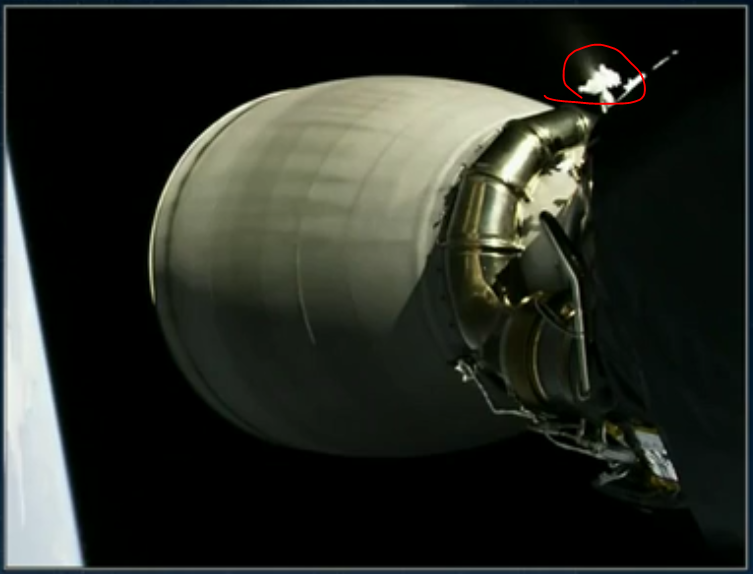 The webcast ended shortly afterwards, with (I believe) no explanation of what was happening1, so I'm wondering what the purpose of this was. Perhaps to get ready for an engine relight to re-test that capability / deorbit the second stage more quickly?

1Note that before the deployment, they did mention rotating the stage, but that was to stabilise it before deployment. I believe this later rotation is unrelated.

At the end of the webcast, they mention the last step is to safe the spacecraft. I suspect all they were doing was getting rid of the remaining fuel on the spacecraft. Rotating it might lead to a slightly quicker reentry as it will be more likely to be broadside for longer to the atmosphere, increasing drag, but I think that is a secondary concern.

The thing circled in the photo is LOX vent. The puffy white object is solid oxygen. It was described at T+1.05:25 in the Iridium-6/GRACE-FO webcast. As such, it's not intended to rotate the spacecraft.

Likely it was to aim the stage for an orbital change either to reenter sooner, or a parking orbit much higher and out of the way. Do not want to leave clutter around GEO/GTO orbits.

Not the answer you're looking for? Browse other questions tagged rockets spacex falcon-9 orbital-maneuver upper-stage or ask your own question.

16
What is this jet of material spraying out from Stage 2 during the SpaceX PAZ mission?

6
Was any first stage recovery system tested on SpaceX Falcon 9 flight seven?
2
DId the Falcon 2nd stage turn around [UPDATED] and point "backwards" before the Orbcomm-2 deployement started?
12
What is it that SpaceX is editing out of their videos after posting them on YouTube?
16
How strong and "hot" is the wind on the payload after the fairing is deployed at ~110km?
3
Why is the Falcon 9 upper stage tumbling so much after separation? (SES-10)
13
Why does the 2nd stage of Falcon 9 need compressed He tanks?
18
Why is the flame of the Falcon 9's 2nd stage (nearly) invisible?
4
How does the Falcon 9 upper stage settle its propellants?