Are large halo orbits around L₁'s and L₂'s preferred over small orbits for reasons other than geometry?

There have been many examples of the placement of satellites in orbits around Lagrange points, most have been sun-earth and earth-moon $L_1$ and $L_2$ due to their proximity to earth. In each case both bodies and both points fall on a straight line, so to have the right combination of non-blocked line-of-sight to earth for communications, safe angular separation from the sun, and non-blocked line-of-sight to the sun for solar power, the size and shape orbits about the Lagrange points are carefully optimized.

Besides those reasons, are there orbital mechanical or other reasons why placement in orbit around L₁ and L₂ would be preferred over placement near the points themselves? Does it require significantly more delta-v to get there (shortening station keeping lifetime)? Would station keeping be more difficult or costly (delta-v) near the point than it would be in a larger orbit about the point (excluding communications issues)?

Finally, suppose some organization wanted to have a spacecraft be at exactly one of those fuzzy points. That's not possible, for a number of reasons. The spacecraft's inertial measurement unit cannot sense that it's at a Lagrange point. It would instead have to be calculated. This calculated position (the guidance state) will inherently be in error. To make matters worse, where the spacecraft thinks it is (the navigated state) will also inherently be in error. To make matters worse yet, the propulsion and control systems are also imperfect.

The best that could be done would be to keep the spacecraft within some control volume surrounding the point. The control algorithm would necessarily involve deadbands, regions where the thrusters don't fire, for a couple of reasons. One is the nature of the thrusters on those vehicles, which are either on or off (they are not throttleable). This suggests using what is called bang-bang control. More importantly, the cameras or other instrumentation typically can't be used during thruster firings. Bang-bang control is optimal from both a control theory and operational perspective.

This however misses the goal of being close to the Lagrange point. This approach also doesn't take advantage of orbital mechanics. A spacecraft in a pseudo-orbit about one of those Lagrange points explicitly does take advantage of orbital mechanics. While these pseudo-orbits are not stable, the stationkeeping requirements for them are vastly reduced compared those for a comparably sized control volume approach.

This is a supplementary answer because it still involves geometry, even though it's really future geometry.

tl;dr: Large halo orbits are definitely preferred to small halo orbits because the small ones are not halo orbits! They will be criss-crossy Lissajous orbits and sooner or later end up along the axis between the two bodies (geometry reasons) even though they originally clear that area.

The article Chang'e-4 lunar far side satellite named 'magpie bridge' from folklore tale of lovers crossing the Milky Way about Queqiao, which will be (among other things) Chang'e-4's relay satellite, was found in this interesting answer. They both point out that Queqiao will be in a halo orbit around the Earth-Moon L2 point so that it has a line of sight to both the far side of the Moon as well as the Earth at all times.

To first order, the motion of an object near the L2 equilibrium point is periodic in the x, y plane of the Moon's orbit, and it is also periodic out of plane in the z direction. However, the xy period and the z period are not necessarily equal! The name for the pattern made by harmonic motion in two axes where the periods are not constrained to be identical is called a Lissajous pattern, and likewise these orbits are called Lissajous orbits. The problem is that unlike equal periods resulting in a "nice, halo orbit" these will sooner or later move so close to the Earth-Moon axis that communications with the Earth will be blocked.

This is a well known problem. For example, sooner or later DSCOVR will end up passing so close to the Earth's line of sight with the Sun that communications will be lost for weeks or longer.

Therefore, the reason that large halo orbits are definitely preferred to small halo orbits is that small halo orbits are not halo orbits! While they might be lumped into the "halo category" if they are not large enough they will not be able to have equal in-plane and out-of-plane periods, and really be just Lissajous orbits with unequal periods. While if they are large enough, they can be constructed as Lissajous orbits with equal periods and therefore be proper halo orbits. Though this is not automatic careful adjusting of the ratio of in-plane to out-of-plane amplitudes (the "For every value of $A_y$ > 32,871 km, there is a corresponding value of $A_z$..." block quote from Farquhar. 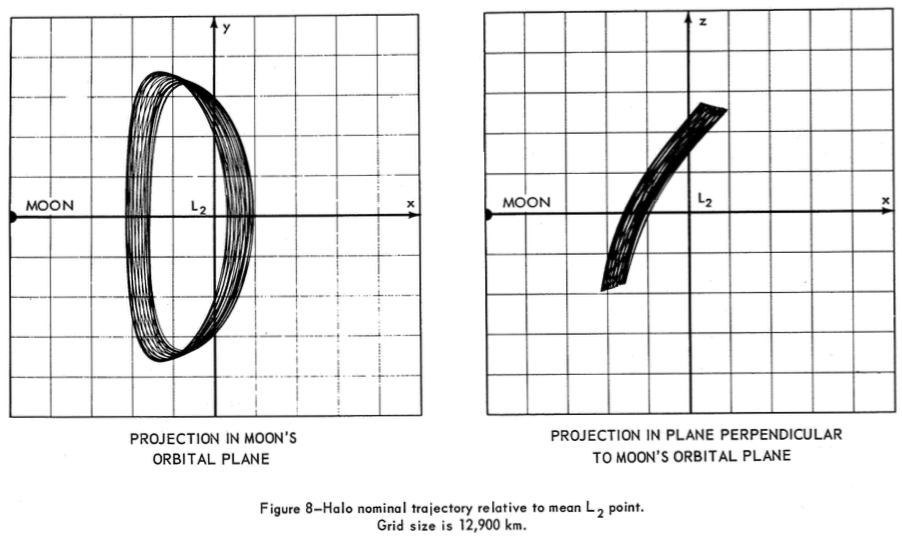 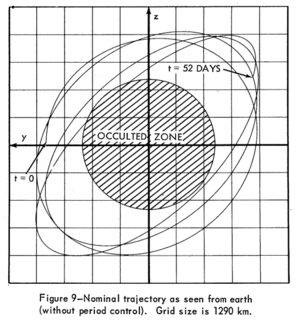 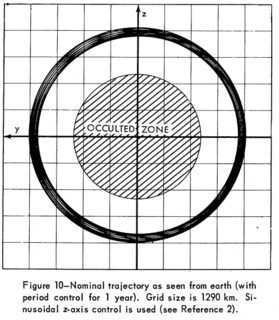 One thought is traffic collisions. Once you put the first satellite exactly at the L point in question no other satellites can occupy that position. And because that are gravitationally stable points shifting them out again at the end of their life time is relatively expensive. So to be good neighbors to the other missions in the neighborhood you will prefer to orbit the L point which increases the number of missions that can go on simultaneously.

The LPO restrictions define a box centered at the L2 point with three dimensions in the RLP X, Y and Z directions ... The Y and Z constraints are based on communications and stray light requirements. The stray light requirement protects the JWST instruments from solar, lunar and Earth stray light. As seen in Fig. 3, the LPO requirements can be fulfilled by a general LPO category, which includes tori, quasi-halo, and Lissajous.

37
Why should the James Webb Space telescope stay in the unstable L2?
16
What are the sources of light at L2? How will the James Webb telescope be powered?
7
What is the required burn to keep a satellite at a Lagrangian point?
13
Why is NASA choosing such a large “halo” orbit at L2 for JWST?
5
Is L2 at a distance where the Earth totally eclipses the Sun?
8
What is the difference between halo orbits and Lissajous orbits?
11
What sort of orbital elements are used to describe halo orbits?
4
Comet at Mars L1
5
Why is Queqiao's dish antenna so big? (Chang'e-4 relay satellite) Largest ever on/near the Moon?
4
Station-keeping delta-v per year for an Earth-Moon vanilla halo orbit?
See more linked questions

23
Are there any (Lagrange) points in the Solar System in perpetual shade?
8
How does gravitational stability change with the distance from special places such as geostationary orbit and lagrange points?
17
Are some Halo Orbits actually Stable? (stable orbits about unstable Lagrange points)
1
Did ISEE-3 spend a few years in a halo orbit around sun-earth $L_1$ without using any fuel?
2
How much delta v does it take to get to the Sun-Earth Lagrange 3 point?
18
What's the largest aperture telescope sent beyond the Earth-Moon system?
6
Does Kerbal Space Program have a software migration path to Lagrange points, halo orbits, and other 3-body goodies?
4
Do Lagrange points still exist if there is significant radiation pressure on the third body from the first?
5
Why is L2 Langrangian point stable?
5
How does gravity change beyond L2?