Does the tape recorder on Voyager-1 still work?

I'm preparing a talk on data storage for an ASME meeting. Given that it's 20 billion km away, I want to quote Voyager I as the "largest control loop" in existence. I'm guessing the tape recording capability is no longer used, but is it still true that someone here on earth could press a button and 18 hours later the tape would start running and 18 hours after that we could pick up the data with the deep space network. I want a "gee-whiz" start to the talk so appreciate any help on interesting aspects or anecdotes, etc. (I see the discussion on angular momentum, for example) - Roger

voyager data-storage
Share
Improve this question
asked May 15 '16 at 16:41

Edit: The Spacecraft operations schedule contains the answer. On December 18, 2021, we see an item 'PLAYBACK' show up in the schedule for Voyager 1. 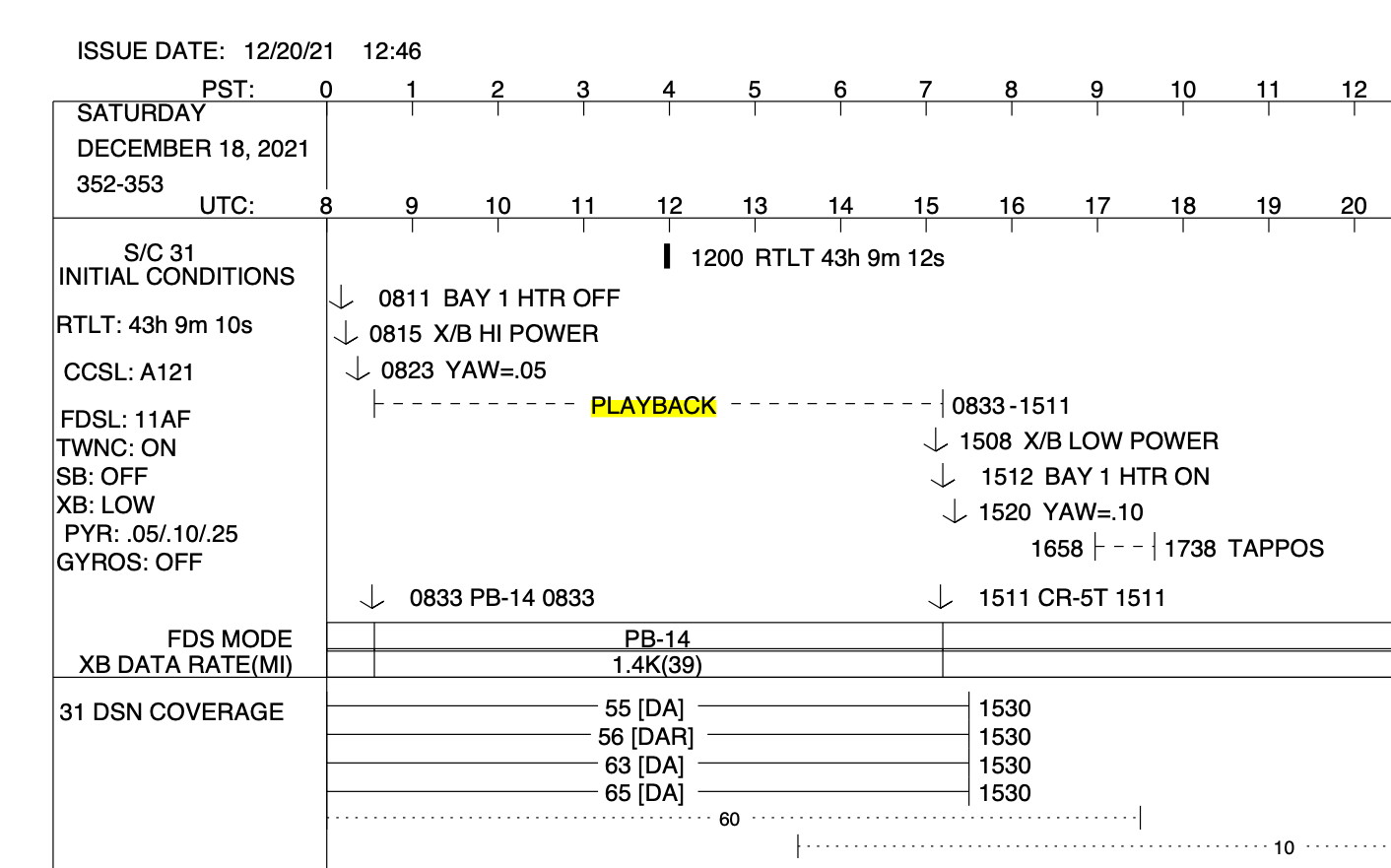 S/C 31 is Voyager 1. The 'PLAYBACK' label is the data playback itself, this takes about 6 hours at 1.4 kbit/s. Before playback you can see 'X/B HI POWER', which switches the transmitter to high power mode (18 instead of 12 W).

'31 DSN Coverage' shows the antennas that are used. '55' is DSS 55, one of the antennas at the Madrid station. They're using 4 antennas (at Madrid) in an array: DSS 63 is the 70-m antenna, the others are 34 m diameter (DA = downlink pass in an array, R is the array reference antenna).

At various other times in the schedule you'll see 'TAPPOS', which I'm guessing is a Tape Position command, in preparation for recording PWS data.

This part was written in 2016. The tape recorder on Voyager 1 is still in use:

Science data are returned to earth in real time at 160 bps. Real time data capture uses 34 meter Deep Space Network (DSN) resources (see below) with the project goal to acquire at least 16 hours per day of real time data per spacecraft. This goal is not always achieved due to the competition for DSN resources with prime mission projects and other extended mission projects.

Once a week per spacecraft, 48 seconds of high rate (115.2 kbps) PWS data are recorded onto the Digital Tape Recorder (DTR) for later playback. An additional 48 seconds are recorded each week on Voyager 1. These data are played back to Earth once every 6 months per spacecraft and require 70 meter DSN support for data capture.

Voyager 2 DTR operations was no longer needed due to a failure on the high waveform receiver on the Plasma Wave Subsystem (PWS) on June 30th, 2002.

limited by ability to capture 1.4 kbit/s data using a 70 m/34 m antenna array. This is the minimum rate at which the DTR can read-out data.

I'd expect it to be possible to play back some data from the DTR into Voyager's RAM, then transmit at a slower rate from RAM. The JPL site doesn't mention this possibility, though.

Not the answer you're looking for? Browse other questions tagged voyager data-storage or ask your own question.

24
How was magnetic tape decay prevented in Voyager 1?
9
How often do we get information from the Voyager spacecrafts?
4
On which device data gets saved on spacecrafts?
6
Have traditional spinning hard drives ever been used in space outside of pressurized crewed areas? Ever beyond LEO?

28
What science are the Voyager missions still doing after so many years away from the Solar System?
40
How does Voyager 1 send signals to Earth?
18
Does Voyager 1 do anything to be more observable?
24
How was magnetic tape decay prevented in Voyager 1?
22
Can Voyager still use its thrusters to avoid hazards?
24
Did the designers of Voyager neglect the angular momentum of the tape recorders?
4
Voyager 1's tape recorder and other angular momentum management issues
6
How does Voyager take pictures in space?
18
How is Voyager 1 still operating?
11
Do the Voyager probes transmit analogue or digital data?