Optimum delta-v burn to change periapsis or apoapsis at an arbitrary point on an elliptical orbit?

This question is explicitly not about doing burns at the apoapsis or periapsis in order to raise/lower the other apsis. Of course those are going to be the most efficient maneuvers, and the burns should be prograde or retrograde to the orbit at those points. The question is also not about Hohmann transfers, or circular starting orbits.

But, given a point which is closer to midway between the apses, what is the optimum burn $\Delta V$ and direction to modify one of the apses? For a more concrete example, lets say that we are "roughly" halfway on the return from the apoasis to the periapsis and wish to raise or lower the periapsis. Also this problem could be a hyperbolic entry orbit and we're trying to raise or lower the periapsis. The change in the final apoapsis is only going to be constrained by the requirement that the $\Delta V$ of the burn is minimized.

Burning prograde or retrograde can also raise or lower the periapsis, but when away from the apoapsis this direction of the burn is less efficient.

I am not aware of a closed form solution, and I'm pretty sure there isn't one. You need to optimize the direction for each $\Delta V$, and find the pair that gets you to where you want to be optimally.

However the apoapsis and the orbit orientation will change as well. So to optimize the periapsis change, you will need to be flexible on exactly "where you want to be".

Here is a simple example, where the direction was optimized for a fixed $\Delta V$ to maximize the periapsis increase: 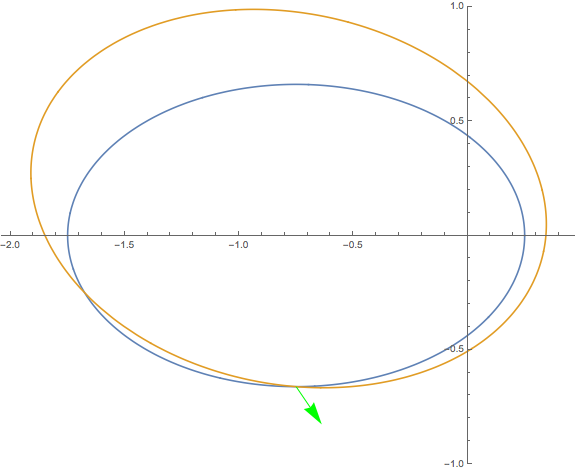 The initial blue orbit was changed to the orange orbit with an impulsive maneuver at the location and direction of the green arrow, which is on the inbound portion of the orbit halfway across the ellipse. The body is at the origin. It is clear that in addition to raising the periapsis, the apoapsis was also raised and the orbit was rotated.

By the way, that optimal direction is 7.2° above a tangent to a circle around the body through that point.

You can learn more about orbit changes in these locations by looking at infinitesimal maneuvers, and seeing analytically how the orbit elements change. This is useful for low-thrust activities, where you would like to thrust over much or all of the orbit.

3
How to calculate new periapsis and apoapsis after orbital velocity change
4
Prograde/retrograde vs radial/antiradial burn - why are the former so much more common?
3
Calculating dV to raise apoapsis at an arbitrary point of an orbit
20
Is the ideal transfer between two arbitrary planar orbits always a bi-tangential ellipse?
4
What would be the effect of a non-periapsis and non-apoapsis prograde burn on the shape of an objects orbit?
6
How would off-apsis burn affect the angle and position of new apoapsis
3
How does one calculate the argument of periapsis of an orbit after an arbitrary maneuver?
23
When burns are made during inefficient parts of the orbit, where does the lost energy go?