There's been a lot of discussion about SpaceX's ~30% price reduction from re-use of the first stage, which got me to wondering: why exactly was the Space Shuttle so expensive to service and prep for re-launch?

I'm mostly interested in the actual servicing of the SSMEs themselves. They're fiendishly complicated, but does anybody know exactly what the main procedures were, and how much they cost? Or was it the case that other Orbiter processing tasks and low launch tempo were the biggest contributors to the cost?

It varied throughout the program - the SSMEs changed a lot over its course. Columbia's original FMOF engines were only marginally OK for flight. Until the Pratt turbopump redesign, the high pressure turbopumps had to be overhauled after every mission. By the end, overhaul requirements were somewhat reduced.

Here is overview information on SSME ground servicing procedures as they were in 1989. All information is from SSME Pocket Data, RI/RD87-142. The table of contents lists the major procedures performed. I have included a scan of page 3-3. 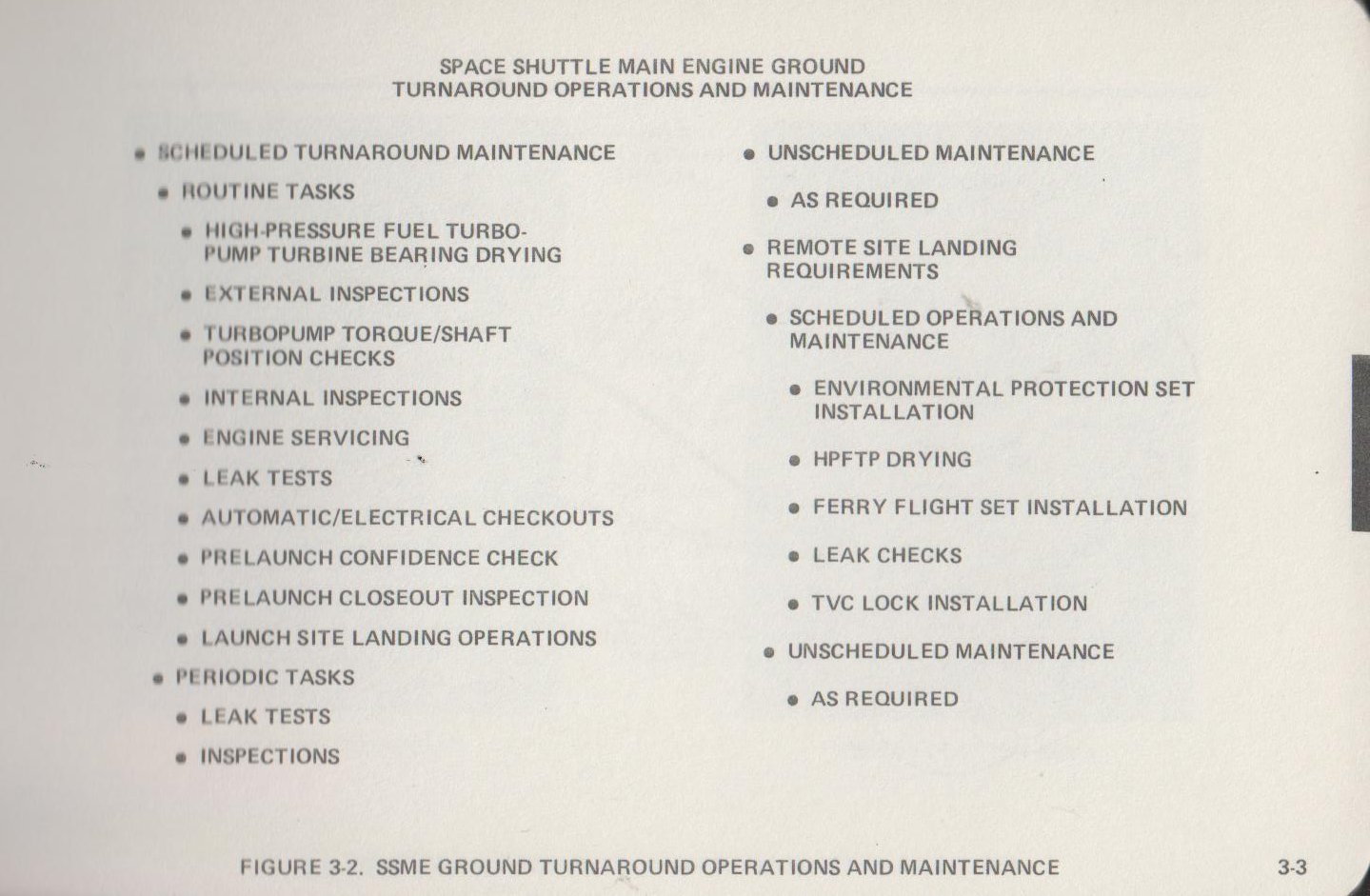 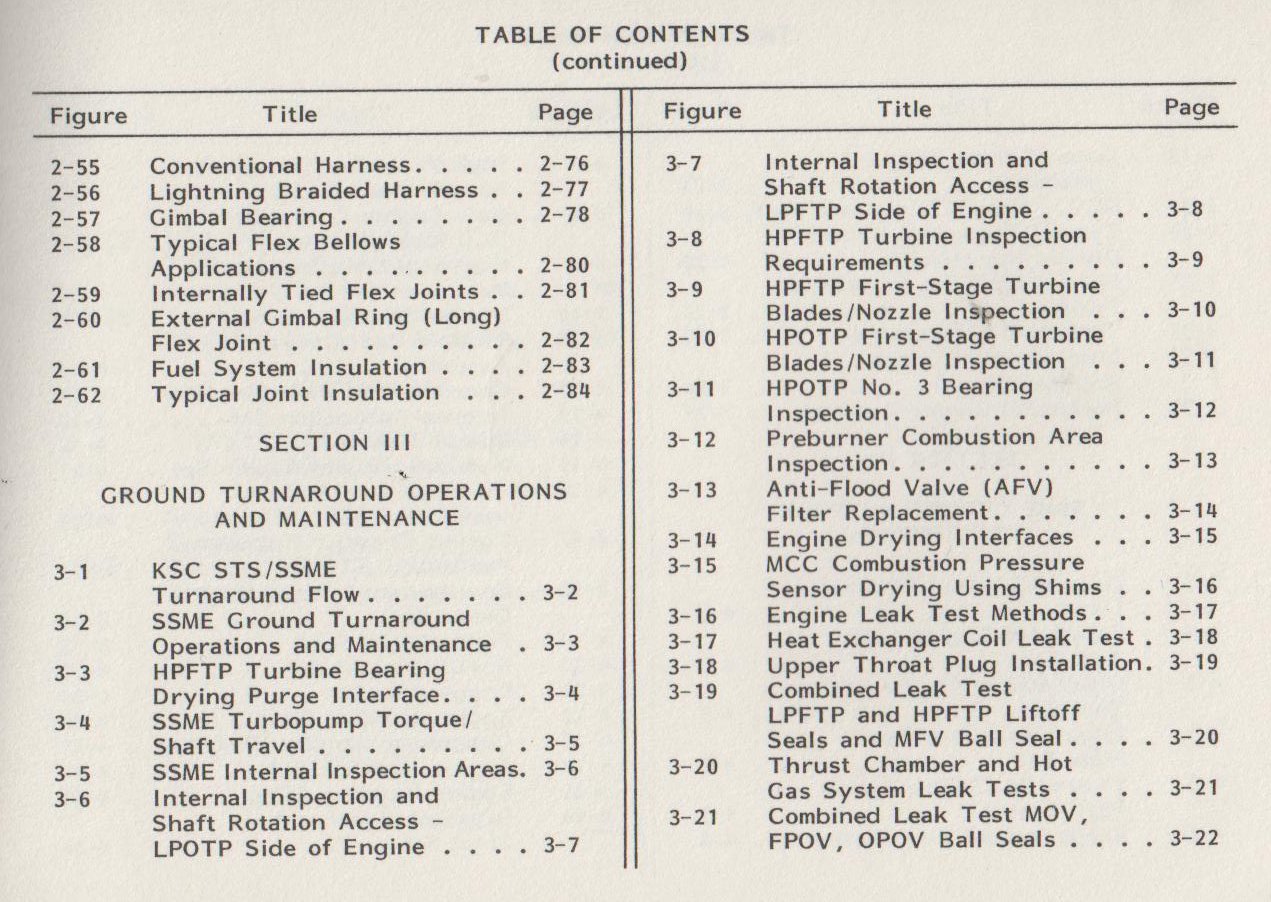 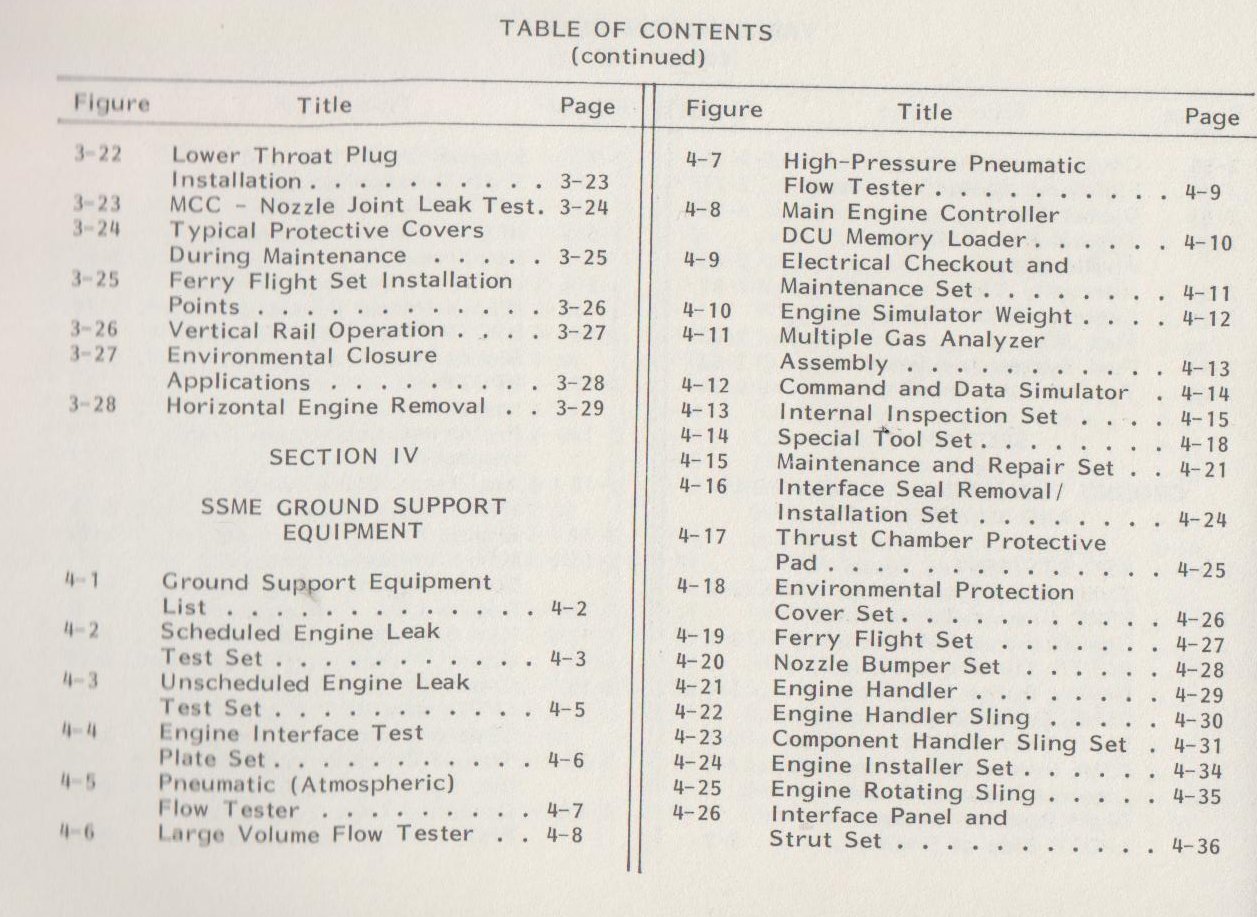 Besides the SSME, I've seen estimates that a new external tank cost \$40-\$50 million and each SRB cost \$40 million to refurbish/rebuild. Add to that the cost of inspecting and replacing the TPS tiles, and pretty soon you're talking real money.

I do not know the answer to the SSME specific thing, but the main cost driver for the shuttle was the standing army of 20,000 some odd folk employed by NASA, ostensibly to support the Shuttle program. If you launch 0 times a year, you cost is almost the same as if you launch 10 times a year, for those 20,000 salaries and benefits, and offices for them to work in.

SpaceX is using a much smaller workforce.

The shuttle was built with lots of unknowns, there were so many unknowns that the designers just could not think about unimportant things like the cost of reusing it. If there was a mark2 and then a mark3, mark4, etc the costs could have come down - but that would have required people admitting that got something wrong.

SpaceX is a set of changes to rocket designs that were already well understood, with the willingness to learn for each launch. Just think if the shuttle failed to land in one bit on it first few uses, but SpaceX got paid for doing their landing experiments, as they charge for the loads that they sent up.

Not the answer you're looking for? Browse other questions tagged launch spacex space-shuttle reuse ssme or ask your own question.

24
Are SpaceX Falcon rocket boosters significantly cheaper to operate than traditional expendable boosters?
1
Why was the reusability of the SSMEs so poor, and why was this considered acceptable given their purpose to launch a reusable vehicle?

19
How much fuel was used for a Space Shuttle launch?
11
Could Orion repeat any of the Hubble Space Shuttle servicing missions?
7
Which STS mission raised the normal engine throttle above 100%, and what change to the SSME made that possible?
5
Theoretical Max G forces on Shuttle Launch?
1
How does the Space Shuttle's SSME engine's thrust vary after ignition?
5
Ground personnel proximity to space shuttle at launch?
2
Where can I find launch trajectory data of the space shuttle?
18
In a shuttle launch, what would have happened if all three SSMEs failed during flight?
13
How long did it take to remove or install an SSME on the Space Shuttle?