WHY did Rosetta have to go into hibernation for 2.5 years?

It seems the Rosetta spacecraft was put (put itself) into hibernation 08-June-2011. It spun itself up to stabilize its attitude, then shut down navigation, attitude control, communication systems as well as some of the heaters - if I understand correctly.

It then remained in hibernation for about 2.5 years (by far the longest scheduled hibernation/wake-up on record!), with only the (a) computer heated and powered, but probably without a significant workload. This was powered by the small amount of light that fell intermittently on the panels at various angles which were pointed towards the sun. The rotation allowed for passive maintenance of spacecraft attitude.

It then woke itself up 2.5 years later on 20-January-2014, de-spun, re-oriented for better sunlight on the panels, and "phoned home."

The video below is great, and this answer is helpful to read - including rosetta_wake-up_faq_20_jan_2014.pdf about Rosetta coming out of hibernation. However, it seems to explain that the "special hibernation mode" was necessary to survive the hibernation itself, but I don't see why that in turn was necessary.

A special ‘hibernation mode’ for the spacecraft was designed by engineers at EADS Astrium, the main industrial prime contractor that built Rosetta, to allow it to survive the large distances from the Sun during the cruise.

Was the spin done to conserve propellants? Lifetime of the reaction wheels? I can't think of anything else that would get "used up" by leaving it active.

WHY did Rosetta have to go into hibernation for 2.5 years?

I measured some screen shots of this video - Rosetta is only about 18% farther from the sun at aphelion (middle of hibernation) than it is when it enters and exits hibernation. That means sunlight at perihelion was about 72% as bright as at hibernation enter/exit.

Why was it necessary to keep Rosetta in hibernation for 31 months?

To limit its consumption of power and fuel, and to minimise operating costs. During hibernation it was spinning once per minute and faced the Sun, so that its solar panels could receive as much sunlight as possible. Almost all of the electrical systems were switched off, with the exception of the radio receivers, command decoders and power supply.

The spin stabilisation made sure Rosetta continued to point at the Sun, receiving the largest amount of solar power possible while not needing fuel for the attitude control thrusters.

Rosetta's solar panels are already among the largest ever deployed on a satellite. Making them much larger would have eaten into the mass budget of the probe.

This ESA presentation on Rosetta flight operations contains an orbital diagram that shows where Rosetta entered and exited hibernation. 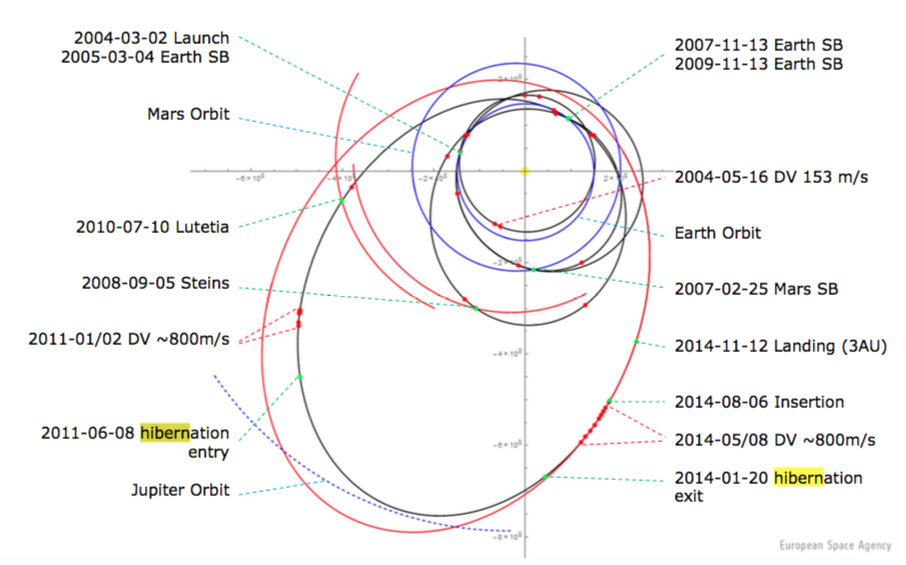 This long hibernation period is unprecedented. But the designers felt they had no other option, despite the risk:

One such person is Andrea Accomazzo. He joined the Rosetta mission in 1996 and is now the spacecraft's operation manager. He knew early on that hibernation would be a challenge. "In the development phase of the mission, I tried to convince my manager many, many times not to design a hibernation mode. We had no other choice but to create this," he says.

Rosetta was near/at the maximum lift capacity of the Ariane 5 rocket (budget: 3004 kg, launch weight is given at "approx. 3000 kg"). Adding larger solar arrays would have put the spacecraft over budget.

I found the power budget in this presentation: 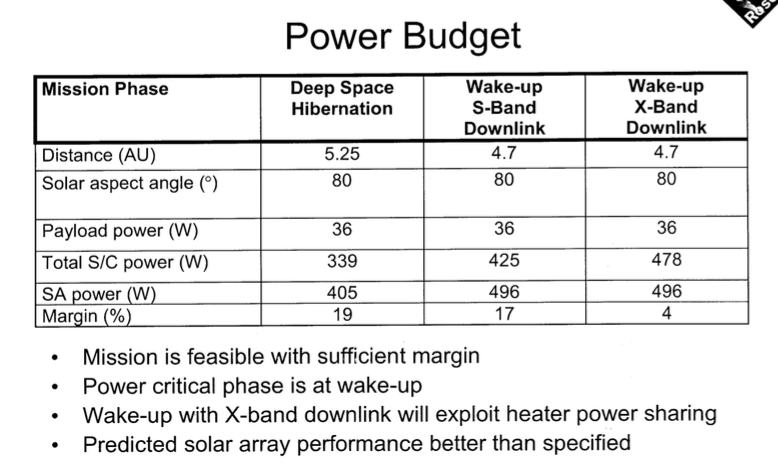 During hibernation, the spacecraft drew 339 W, most of it for heating. During active operations, that rose to 425 or 478 W depending on activity. At aphelion, the solar array produced 405 W.

From the ESA presentation:

Some systems had to be kept on. For instance tank heaters to avoid propellant freezing.

the achievement of this lifetime is helped by the long hibernation periods during cruise, where most of the electrical systems are not operational. This hibernation increases their lifetime by a factor of 10 but requires on-board autonomy to guarantee continued operation in all circumstances

I suspect the main lifetime limitation is on the reaction wheels (which were spun down during hibernation), not the electronics themselves.

Solar arrays are pretty much worthless beyond 4 AU or so from the Sun (depending on the size of the arrays of course). The Juno spacecraft will be the first mission to Jupiter (about 5 AU from the Sun) that uses solar arrays. In the case of Rosetta, it was easier to design the spacecraft to go to sleep for a while than it was to outfit it with solar arrays sufficiently large for that portion of its journey.

The tyranny of that equation means that shaving mass is an extremely important concern to spacecraft designers. In the case of Rosetta, putting the spacecraft to sleep for the 31 months around aphelion was a nice way to shave a lot of mass.

Putting Rosetta to sleep involved despinning Rosetta's momentum wheels (which involved fuel use) and then making the entire spacecraft slowly rotate (which involved even more fuel use). The reverse process (also involving fuel use) was applied during the wakeup sequence. This expenditure of fuel would not have been needed if Rosetta's arrays were 40% larger. That expenditure of fuel apparently was small compared to the much larger mass and fuel penalties that would have resulted if Rosetta had been kept fully operational during that 31 month hibernation period.

The above is public knowledge. Asking why Rosetta was designed to work this way is not, at least as far as I can tell. Partly it's because everyone in the know knows that solar arrays are not a good solution at Jupiter's orbit and beyond. Making Rosetta go into a low power mode just made sense. The details of when and how are hard to uncover.

Partly it's how consensus is reached. Many of these decisions are made in meetings. I've been in multiple meetings where someone asked the person taking minutes to stop doing so and then spoke candidly, or where people walked up to the blackboard or whiteboard and put down their ideas. These things are not recorded. The after-the-fact consensus is what's recorded.

Not the answer you're looking for? Browse other questions tagged artificial-satellite power rosetta deep-space-hibernation or ask your own question.

24
Why aren't batteries used in space?
12
Will the Tesla Roadster return any telemetry?
18
How is Voyager 1 still operating?
4
Probes on a Solar System Escape Trajectory
10
Could Rosetta have been awakened from Earth if necessary?
9
Which countries have built RTGs and used them in Earth orbit and/or beyond?
9
Is this the longest that a spacecraft "went to sleep" and then woke up on schedule?
8
Spacecraft electronics heating
9
What's the record for the longest time a deep space craft has functioned without a reboot?
6
Mass ratio of solar-electric versus radioisotope thermo-electric power for propulsion; beyond how many AU do RTGs win?
See more linked questions

15
How big of a problem is the Lunar eclipse in April 2014 for LADEE?
10
Could Rosetta have been awakened from Earth if necessary?
17
Why not use deep space hibernation in all missions?
8
Could Rosetta have lassoed Chury to hitch a ride instead of chasing after it for 10 years?
3
Is it feasible for a future Rosetta type mission to use wireless transfer of power to Philae?
9
Is this the longest that a spacecraft "went to sleep" and then woke up on schedule?
3
Why is Rosetta not going to hover or descend multiple times before crashing into 67P/Churyumov–Gerasimenko?
32
Why was the Rosetta probe programmed to "auto shutoff" at the moment of hitting the surface?
4
Did IKAROS wake up from its 5th hibernation in Winter 2015?