I am designing a communication system for a small satellite. One of the major constraints is the duration of communication between the satellite and the ground station. I did link budget calculations and the minimum SNR required is 15 dB. I also understand that path loss depends on distance between the transmitter and the receiver, and increasing the SNR will require increasing the power transmitted.

cubesat communication-satellite data-transmission
Share
Improve this question
edited May 24, 2016 at 2:01

The spacial relationship between a satellite and a receiver can be calculated by hand (a common home work assignment in aerospace classes, and another discussion in itself), but the fastest way to find satellite coverage windows is to use a computer. There is plenty of free software available that can do this, but I'll recommend the free version of STK. Here is what you can do with the free version, and here is where you can download it.

The system could be designed in various ways. Data is often broken into packets, which can be transmitted individually. The satellite needs to know which packets the ground station has received successfully and vice versa. Successful reception of a packet is acknowledged with an 'ACK' transmission. To downlink, the satellite could be commanded to transmit a packet repeatedly until it is received successfully, then commanded to transmit the next packet. To uplink data, the ground station would transmit a command or packet and wait for an ACK, then transmit another packet. These methods are agnostic of communication angle and path loss. You simply start when the satellite is approaching the window.

First, Power. Free Space Path Loss (FSPL) is used in conjunction with the Friss Transmission Equation to compute signal power at the input of the receiver (not the receivers antenna, the actual receiver). Given the location of the radios and some information about the receivers this is straight forward. Including atmospheric and other effects can be done if you want a more realistic model (let me know if you're curious).

Next, Noise. Noise is a little complicated since it involves the actual noise of the transmitter and receiver, as well as external noise. Let's ignore external noise and look at thermal noise. Electrical noise is often measure in temperature because thermal energy translates to electron motion, which is electrical noise. Noise power density (noise power per unit bandwidth) is found as $N_0=kT$ where $N_0$ is in watts, $k$ is the Boltzmann constant in joules/kelvin, and $T$ is the receiver system noise temperature in kelvin. A simple approximation of $T$ on Earth is 290 K. (This is ignoring a few things, but it's an okay first attempt).

Noise power spectral density is found as $\frac{E_b}{N_0}=\frac{S/R}{N_0}=\frac{S}{kTR}$ (not in dB) where $S$ is signal power, and $R$ is the bit rate. This is the Energy per bit over the noise density, or the SNR per bit. Defining this in terms of bits will help us relate it to data rate. Further, $SNR = \frac{S}{R}=\frac{E_bR}{N_0B}$ where $B$ is the bandwidth of the signal. Changing your encoding will give different relationships between noise and bit error rate.

You can now relate elevation angle with path loss, SNR, and even maximum data rate. Hurray!

I'm not sure I understand, but I'm going to try to explain. I'm an astronautical engineer, so I'm gonna explain this in orbital mechanics instead of electronics. Hope it helps!

Basically, in orbital mechanics we assume that you can communicate with your sat between the time that it enters to G/S's horizon and the time when it leaves it. You know your altitude and Earth's radius so you can evaluate the central angle related to your orbit using basic trigonometric calculations. Then you can calculate your period in that altitude. Now you know your communication time. 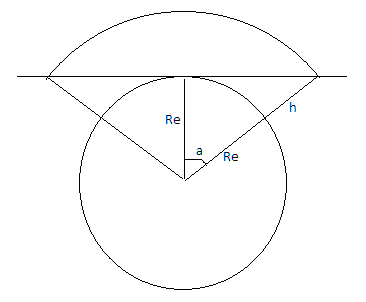 For further analysis, communication time depends on satellite's attitude capability. Also you need to perform an orbital analysis to know that satellite passes directly above GS or at an angle, and when it will pass above GS.

Not the answer you're looking for? Browse other questions tagged cubesat communication-satellite data-transmission or ask your own question.

0
How can the data rate be increased in noisy outer space?
3
Radio Link Design of a low power, sensors to satellite communication system
13
How to calculate data rate of Voyager 1?
9
Is it possible to extend high speed data transmission with lasers to the distance Earth to Mars?
1
Receiver and transmitter in RF/optic satellite communication: distance vs data rate v2
13
Is it possible for LEO satellites to detect a usable signal from regular mobile phones on the ground?
2
Optic communication: day and night
4
There are only a few suppliers of optical terminals: what is the reason?
4
How to compute each of these link budget terms?