Do rocket engines have shock absorbers?

With a million pounds of thrust and many g of acceleration and a significant fraction of a g of vibration, connecting the engine to the rocket can't be trivial.

At launch the mass is very high and maybe inertia keeps the low frequency vibrations down, but as propellants run out, maybe that becomes less effective.

Is the thrust from the engine transmitted through the nozzle directly to the rocket frame? Is there any attempt to dampen the vibration?

I just found this video after watching the one in the answer by @jlansey below. You can see the engine move vertically but the test frame doesn't. At least in this test set-up, there are shock-abosrbers somewhere.

In those old-style gasoline-burning automobiles of the late 19th, 20th and early 21st century, motors had motor-mounts - rubberized bushings or brackets or something similar that allowed the motor some degree of motion/vibration. Do rocket motors on crewed vehicles have something analogous? I'm guessing that vibration limitations for crewed launches are tighter than for non-crewed missions.

I found this answer about vibration isolation of SRB's to be potentially used as crewed launch vehicles interesting and related, but it's focus is certain characteristic vibration modes of SRBs that are nearly finished and basically hollow tubes.

I have managed to confirm that at least the SSME mounting to the Space Shuttle Orbiter does not have any shock absorber, as shown in this diagram. 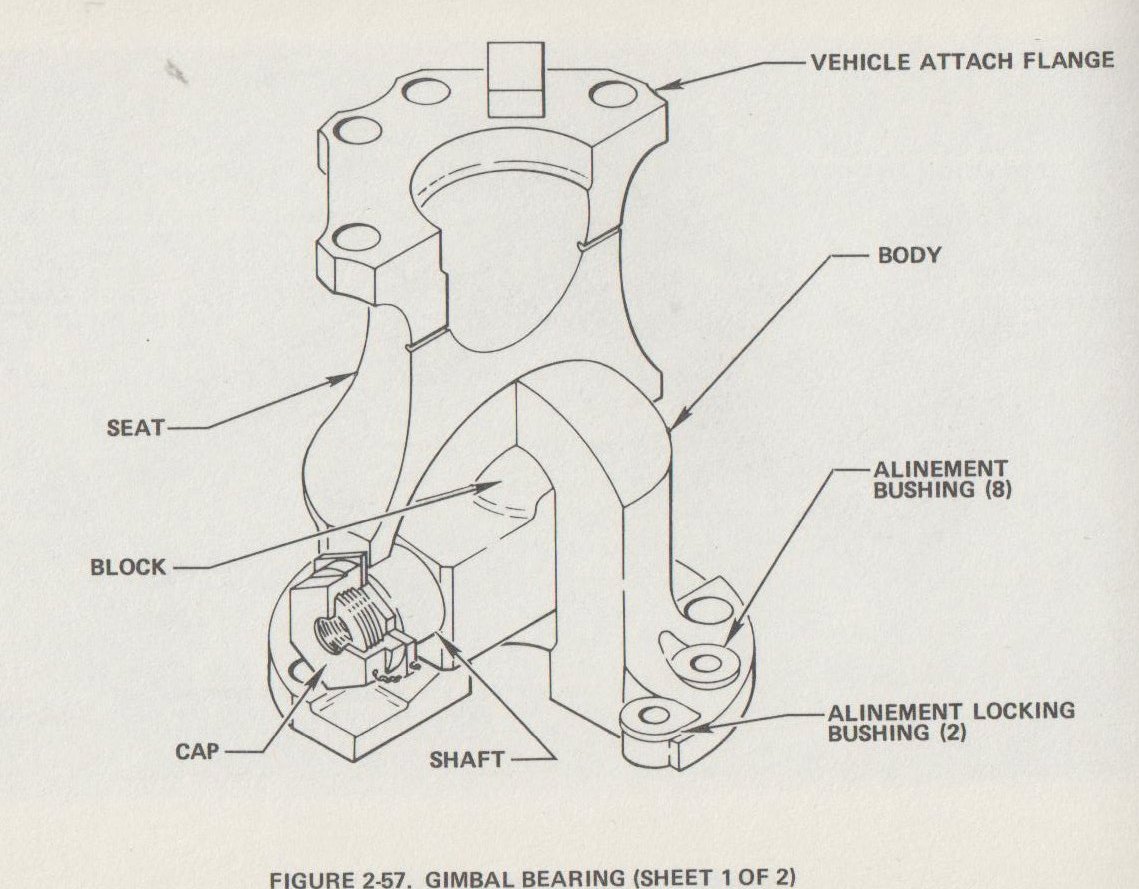 This document has more on the gimbal bearing.

The gimbal bearing provides a means of attaching the engine to the vehicle while allowing the engine to be pivoted (gimballed) around its two axes. This is necessary in order to point the engine thrust vector for vehicle steering, in the manner of a ship’s rudder. The gimbal bearing is bolted to the vehicle by its upper flange and to the engine by its lower flange. It supports 7,480 pounds of engine weight and withstands over 500,000 pounds of thrust. It is a ball-and- socket universal joint in which concave and convex spherical surfaces on the seat, body, and block intermesh. Sliding contact occurs between these surfaces as the bearing is angulated. Fabroid inserts located at the sliding contact surfaces reduce friction that occurs during gimbal bearing angulation. The bearing, which is installed during engine assembly, measures approximately 11 by 14 inches, weighs about 105 pounds, and is made of a titanium alloy.

I cropped this picture to show the engine interface area.

You can see the vehicle side of the spherical bearing in the center of the opening. The bolt pattern matches the drawing!

The green pushrod devices are the thrust vector control actuators, the red circles are covers for the holes where the low pressure turbopumps mount.

Edit: info on the thrust structure from here:

The internal thrust structure is composed mainly of 28 machined, diffusion-bonded truss members. In diffusion bonding, titanium strips are bonded together under heat, pressure and time. This fuses the titanium strips into a single hollow, homogeneous mass that is lighter and stronger than a forged part. In looking at the cross section of a diffusion bond, one sees no weld line. It is a homogeneous parent metal, yet composed of pieces joined by diffusion bonding. (In OV-105, the internal thrust structure is a forging.) In selected areas, the titanium construction is reinforced with boron/epoxy tubular struts to minimize weight and add stiffness. This reduced the weight by 21 percent, approximately 900 pounds.

Finally found a decent picture of the thrust structure. It's from the Dennis Jenkins book Space Shuttle, the 1992 edition, page 140. 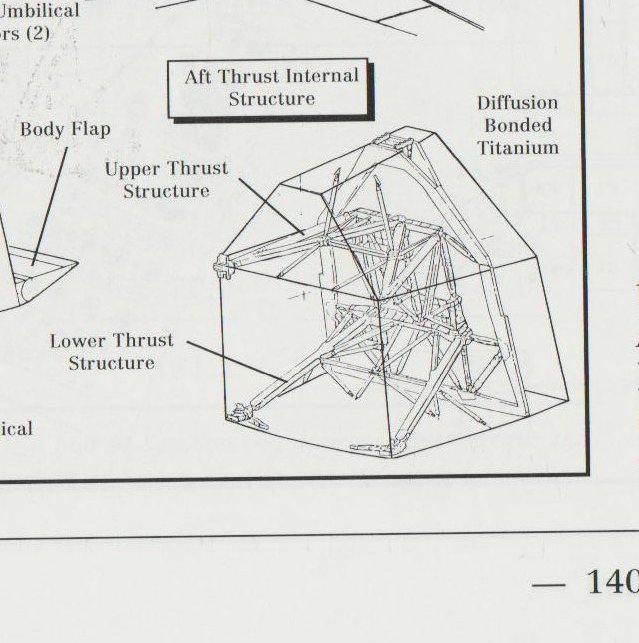 The process of starting a rocket engine is highly controlled and choreographed. It doesn't start up from 0 to several g's in an instant. Usually it takes a second or two. The burning itself is also very optimized to stop any instabilities from building up – so minimizing the vibration. Here is a video from the Space Shuttle where they also start each of the 3 engines at a slightly different time (don't know if this is common.

Marshall and North American engineers devised three changes to the second stage. They installed a helium gas accumulator in the LOX line of the center engine. This reservoir served to dampen fluid pressure oscillations, keeping them out of phase with the vibrations of the thrust structure and engines.

Yes they do use shock absorbers. In this case it's called an "accumulator." The problem arose during the Apollo 6 launch." The "resonance effect" or "pogp oscillations" abruptly appeared during the first 2 minutes of flight. Pogo arises fundamentally because you have thrust fluctuations in the engines. Those are normal characteristics of engines. All engines have what you might call noise in their output because the combustion is not quite uniform, so you have this fluctuation in thrust of the first stage as a normal characteristic of all engine burning.

Now, in turn, the engine is fed through a pipe that takes the fuel out of the tanks and feeds it into the engine. That pipe's length is something like an organ pipe so it has a certain resonance frequency of its own and it really turns out that it will oscillate just like an organ pipe does.

The structure of the vehicle is much like a tuning fork, so if you strike it right, it will oscillate up and down longitudinally. In a gross sense it is the interaction between the various frequencies that causes the vehicle to oscillate.

Not the answer you're looking for? Browse other questions tagged rockets propulsion engine-design vibration or ask your own question.

20
Was the third shuttle engine any different from the others?
10
How do vibrational isolators reduce the g-forces of a payload on a launch vehicle?
15
How were vibrations supposed to be handled in an Ares I?
8
Why is Soyuz's third stage's engine cutoff the most intense?
5
What are the two very large "blue" cylinders attaching to the combustion chamber of each Rutherford Engine?
8
How much jerk do astronauts experience? Is there a safety limit?
3
When this F9 2nd stage engine suddenly moves upon shutdown, is it moving along the rocket's axis?
2
How do all the struts and crosses in the Orion Crew Capsule Service Module work together? What do each of these parts do?