What is the purpose of the jets of water often under rocket engines during launch?

I have watched several STS launches, and noticed that there were always huge jets of water that would begin right before the rocket engines lit. They were right under the rocket, mounted to the pad.

I'm sure they weren't trying to extinguish the flame, and it's kind of futile to try to keep the equipment cool - what was their purpose?

Those are jets of water released by the sound suppression systems installed on the pads and the mobile launcher platforms to protect orbiters and their payloads from being damaged by acoustical energy, reflected from the platform during the liftoff stage of a rocket launch.

For example, this is the sound suppression system at the NASA Kennedy Space Center's Launch Pad 39A: 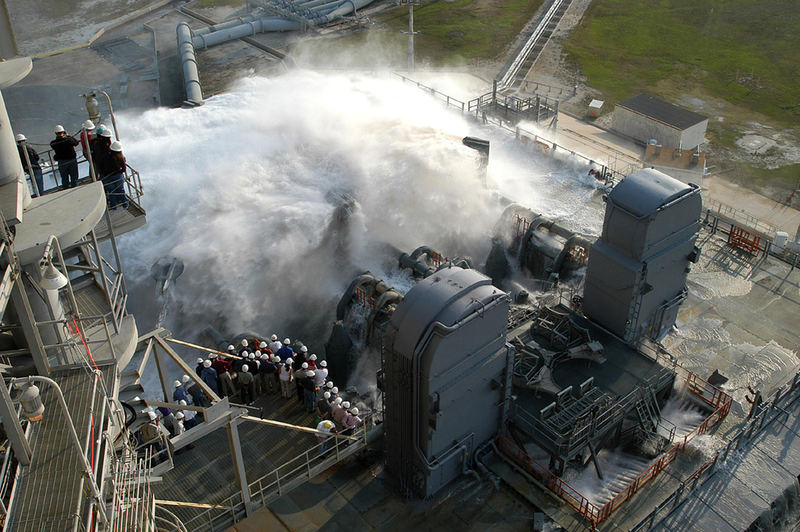 Water is released onto the Launch Pad 39A at the start of a water sound suppression test. (Credit: NASA/KSC)

And a YouTube video of the launchpad water sound suppression system tested for Ares.

Here are a few excerpts from the Sound Suppression Test Unleashes a Flood NASA/KSP article from 2004, explaining this system's purpose:

The water system is designed to protect the Shuttle and its payloads from any damage that may occur from acoustical energy reflected from the Mobile Launcher Platform (MLP) during launch. The water is released seconds before ignition of the orbiter's three main engines and twin Solid Rocket Boosters (SRB), then flows through parallel 7-foot-diameter pipes to the Pad.

The system includes a 290-foot-high water tank filled with 300,000 gallons of water, and it empties in 41 seconds during a launch. Water pours from 16 nozzles on top of the flame deflectors and from outlets in the Shuttle main engine exhaust hole in the MLP at main engine ignition, which occurs approximately 7 seconds before liftoff.

The system was first installed at the pad when reflective energy from the top of the Mobile Launch Platform was causing minor damage to thermal curtains on the SRBs and putting stress on the wings. After adding the system, the sound pressure was reduced by half. 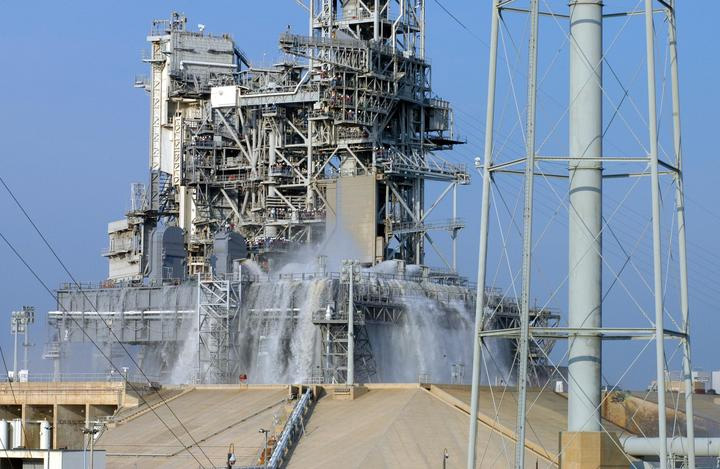 Additional: Here's an interesting related link: Google Street View of the bottom of the launch pad 39A

Most US Launchers use a similar water suppression system for the same reasons as the Space shuttle.

At some level, if you intend to launch often you do not wish your launcher to destroy the launch pad. A rocket launching usually has between 600,000 lbs thrust (Delta 4's single RS-68) to 7 million lbs thrust (Space Shuttle, or Saturn V range) and that is an amazing amount of power released in a small space and it really does not matter what you build your launch pad out of, it will take damage.

Thus minimizing the damage caused is just a good idea, across the board. Water is cheap, easy to manage, and absorbs energy by converting steam, absorbs sound instead of the physical structure.

Russians for the Soyuz boosters have an interesting approach that does not use water suppression, since Baikanour is often experiencing winter when they wish to launch, when flowing water won't work so well (and snow is not as effective as water for this task). They basically suspend the booster over the edge of a cliff, so that the exhaust goes down, and then out a vent, such that there is not much infrastructure directly below it to be damaged.

Amusingly, the ASDS Barge that SpaceX is using for landing first stages has a deluge gun, to cool the deck during landing operations as well.

Not the answer you're looking for? Browse other questions tagged launch space-shuttle water launchpad or ask your own question.

4
What is that thing spraying during a Falcon 9 launch?
3
What is sprayed at a rocket launch? And why?
2
Water Deluge and Flame Trenches
23
Why isn't SpaceX constructing the Super Heavy launch mount on top of the water?
18
What is the base of a launchpad made of?
14
How much water is used at the Kennedy Space Center (KSC)?
9
What's the white tall tower with a tank near Space Shuttle launch pad?
8
How are spacecraft crews protected from sound damage during launch?
7
Disposal pool during RS-25 engine test?
5
Issues with multiple raptor engines working in tandem in starship
See more linked questions

111
What is the purpose of having a countdown during a rocket launch?
37
Why are rocket engines operating above 100% often considered nominal?
5
What are the main steps in the lead-up to a rocket launch?
2
What is all the stuff that goes flying during a launch?
4
What are the advantages of water-based sound suppression vs. cliff-based launching?
22
What are the small gas jets at the rims of the Space Shuttle Main Engines?
14
What exactly is the purpose of connection links strapped between the rocket and the launch pad
4
Could a tank of water under the launch pad be used instead of a flame trench?