How is long-distance optical communications coming along in space?

I remember there was a test of optical communication and some data transfer from lunar orbit to earth, and I think the ISS uploaded (or downloaded-up? which is correct here?) a movie from earth.

In order to have the internet on Mars not end up to be too expensive and to extend the Deep Space Network (and here and DSNnow here) capability, optical seems to be a very important technology for the not-so-distant future.

Free space optical communications (no optical fiber) seems to be just made for space. With a wavelength of the order of 1 micron instead of 10 centimeters, transmission antenna can be smaller in diameter for the same gain. Receiving antennae can possibly be smaller - basically something like the kind of optical telescopes they use now for astrophotography - but that depends on nearby bright sources of light and data rate.

Were these tests successful? Have there been other tests? What's coming next?

The European Data Relay System has recently begun testing. It's for getting data from Earth orbiting satellites down to the ground quickly, without waiting for the satellite to pass over a base station.

Here is the first big test: an image taken by Sentinel 1A, sent by laser to an EDRS satellite (in geostationary orbit) and beamed down direct to the base station in Germany. (Hi-res version)

The biggest advantage of all this is a Sentinel satellite in low earth orbit can pass its information to base with the minimum of delay, even when out of sight of a base station.

Here's a picture of one of the satellite-mounted laser communication terminals: 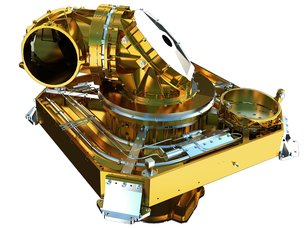 The lunar mission which tested optical communication was LADEE. The ISS program you're thinking of is OPALS. Both tests succeeded, but neither was meant for ongoing operation. LADEE intentionally impacted the moon, and the US orbital segment of ISS currently uses S and Ku band radio communication through TDRSS.

The next proposed study on laser communication is LCRD, which hopes to fly on a commercial payload in 2019.

There is also a high probability that the next Mars orbiter will use optical communication. NASA has been interested in optical communications for Mars since at least 2008, as shown in this presentation from Jim Schier, Chief Architect for NASA’s Space Communications and Navigation Program at NASA Headquarters. Most recently, in April 2016 a request for information went out concerning this upcoming Mars orbiter, and the awards are due to come out this June, so stay tuned. Look for lasercomm, solar electric propulsion, a high-res camera, and ground-penetrating radar in the winning proposals.

Not the answer you're looking for? Browse other questions tagged deep-space-network optical-communication or ask your own question.

17
Could "live" video be transmitted from Mars?
12
Will the Tesla Roadster return any telemetry?
5
Is there a way (working or in development) to track satellites in lunar orbit like we track objects in Earth Orbit?
2
Is it possible to send a CubeSat to Saturn/Enceladus?
4
Are there discussions or plans for extending the internet into space beyond Earth?
4
All Optical Global Network - how does the space-to-ground link avoid clouds?
1
Intercommmunication between crewed space missions in all planets of solar system
1
Will future deep space optical communications "ground stations" actually be in space, or on the ground?
1
How big of a telescope will Psyche's deep space optical communications demonstrator use out at 5 AU?