What problems led to the use of the Sky Crane system used by Curiosity?

We all know about the fancy 'sky crane' system used on NASA's Curiosity rover.

The rockets slow the descent to 1 ½ mph and power a sideways parry to avoid the faster falling chute. As Sky Crane descends to 60 feet above Mars' surface, the rover inches down from underneath it on three nylon ropes like a spider spinning strands of its web. With Curiosity dangling 20 feet below, Sky Crane continues its downward progress until the rover is resting on the surface. Explosive bolts cut Curiosity's last physical attachments to the outside world, and Sky Crane flies away to death-plunge into the red sands, its incredible job done.

Why did they use this seemingly overly complex system? Why wasn't a simple airbag system used?

This NASA doc explains fairly clearly why the skycrane system was used:

"With a payload this size, the rockets could kick up enough dust to compromise the rover and its instruments," explains Sell. "And the rockets could excavate craters Curiosity would have to avoid as it drives away. Add to that the risk of a big, heavy vehicle driving down off the lander via an exit ramp to reach the surface."

"Bags big enough to soften its landing would be too heavy or too costly to launch. Besides, you'd have to drop the payload so slowly for the bags to survive the load, you may as well place the rover right on its wheels."

This image really explains the difference in size between Curiosity and previous rovers, which make many methods not feasible: 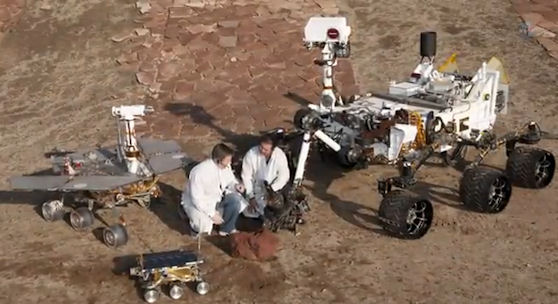 These are Earthbound prototypes. Curiosity had not yet been launched when this photo was taken.

Not the answer you're looking for? Browse other questions tagged mars rovers curiosity skycrane or ask your own question.

2
Curiosity landing system versus Spirit/Opportunity's
2
What's the advantage of a skycrane system?
1
Why have JPL martian rovers stopped using airbags and started using skycranes?
16
What are the disadvantages of parachute+airbag for atmospheric landing, versus rocket-based?
5
Why did NASA intentionally crash-land the Curiosity and Perseverance sky cranes on Mars?

17
What are the black and white circular patterns on the Curiosity rover?
7
What were the Curiosity sky-crane’s descent engines?
6
What would happen if the Curiosity rover "flipped over"?
7
Why didn't NASA use the "Sky Crane" method for landing the InSight mission on Mars?
4
How was sky crane (used on Mars Science Laboratory's Curiosity) tested?
4
Are there any images of Curiosity during the sky crane operations?
9
During the MSL (Curiosity) Mars atmosphere entry, when was the last time the Reaction Control System used?
5
Why did NASA intentionally crash-land the Curiosity and Perseverance sky cranes on Mars?