Passive attitude stabilization with magnets - are there studies based on actual flight data?

Specifically with the small satellite and cubesat people, there is an rather 'old' idea around: Passive attitude stabilization based on permanent magnets. 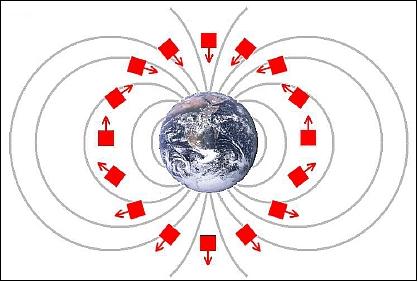 The concept is rather simple. A magnet, which is mounted on a satellite, will always attempt to align its magnetic field with Earth's magnetic field. This is intriguing, because it does not need computers, power, moving parts or just any form of control.

For me, there are two critical weak spots in this concept. First, if it works, it does stabilize a satellite only on a single axis. Second, Earth's magnetic field is not a clean dipole - with respect to both, its intensity and the orientation of magnetic field lines. But even if you treat it as a simple dipole, the relative rotation of the magnetic field lines along e.g. an polar orbit does not occur in one geometric plane or with a constant angular velocity. For me, intuitively, this whole thing should lead to a rather strange tumbling behaviour of such a satellite.

How is it supposed to work? Are there studies of this concept based on attitude data from satellites actually in space? If yes, what was found?

Results from detailed computer simulations are interesting for me, too, but I clearly prefer results based on flight data. There are a fair number of projects, which intend to use magnets or used them (while the satellite failed), so I find it rather hard to find statements, which go beyond 'it will work'.

Check with Kentucky Space. They have KySat-2 on orbit using passive magnetic control.

Here is a description of the control system from their website:

Passive Magnetic Stabilization: KySat-2 is equipped with a passive attitude control scheme known as Passive Magnetic Stabilization. This passive control technique uses permanent magnets and magnetic hysteresis material fixed to the chassis of KySat-2. The permanent magnets will provide torque in attempts to align with Earth’s magnetic field (in the same fashion that a magnetic compass needle points to magnetic North). The permanent magnets will be mounted to the spacecraft’s chassis in such a way that when aligned with Earth’s magnetic field, KySat-2′s camera will point at Earth while over Northern Hemisphere, and out into space while over the Southern Hemisphere.

Permanent magnets provide the small amount of torque needed to keep the spacecraft oriented correctly, but in the vacuum of space, there is no damping effect (such as air resistance as we have on the surface). Because of this, KySat-2 would oscillate around it’s [sic] targeted orientation rather than settle into it smoothly. Also, permanent magnets can only provide control over two axes while the third axis is uncontrolled and free to rotate. To alleviate these problems, KySat-2 is also equipped with hysteresis (memory) material. This material “memorizes” the current magnetic field and thus resists changes in KySat-2′s orientation. This effect is small, and much less assertive than the permanent magnets, but it provides the needed damping effect to stabilize KySat-2 on the two control axes, and resist changes on the uncontrolled axis as well.

Yes, it does work. The first Australian satellite, Australis OSCAR 5, used a magnet to approximately align one axis with the earth's magnetic field AND rods with a large magnetic hysteresis loop to remove spin energy. AO5 was built in 1966-7 and launched by NASA on a Delta rocket with a Tiros satellite in 1970. Crude, passive and effective.

If you try this, be sure to coordinate with the other cubesat teams sharing your deployer pod. In 2011 the MCubed and HRBE teams found out the hard way that there can be unintentional interactions between cubesats employing passive magnetic attitude stabilization.

The Swayam satellite made by students of COEP (College of Engineering), Pune, India works on this principle and is proven stable. It was launched in June or July 2016 (don't remember the exact date now). Try and contact them if you wish.

I've managed to obtain a scan of ARRL QST July issue of 1969, where operation of Australis-Oscar 5 satellite is described. This includes spin reduction through permalloy bars and stabilization by a bar magnet:

When Australis is placed into orbit, it will be spinning at some 4 revolutions per minute. This spinning will cause fading in the signal. In order to remove the spin energy, a set of permalloy rods with a very large hysteresis loop at the low flux density has been included. Hysteresis loss along with eddy current loss in the case, will tend to remove the spin, allowing orientation along the local magnetic field vector by a small magnet (see fig. 3) which is also included. Since the v.h.f. antenna lies along the same axis as the bar magnet (the X axis) fading of the v.h.f. signals should be reduced. All antennas are made of flexible steel tape. 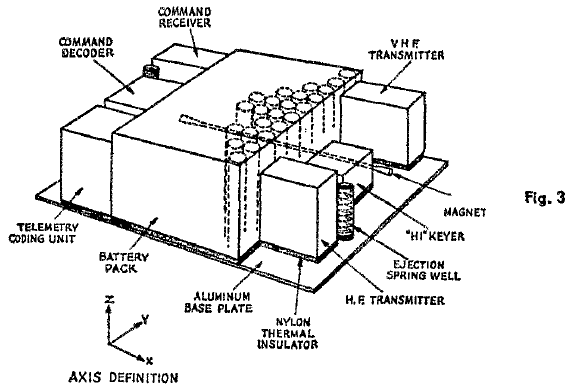 16
Preventing orbital decay and micro adjustments to orbits by "leaning" on Earth's magnetic field
10
Would magnetic torquers placed in a polar satellite work?
17
When have secondary payloads damaged the primary payload of a launcher?
3
Passive spin damping system
3
Could you use magnets to orient in space?
1
Are there any modern cubesats or smallsats that have relied only on magnetotorquers for attitude control?

6
Did the NASA PhoneSat actually try to use the GPS from the phone itself?
8
Could an articulated permanent magnet work as a low-power cubesat magnetotorquer? Problems?
5
Are there terms for Earth orbits with rational number multiples of 1 sidereal day?
1
How were Venera's variometers able to measure extremely weak, nano-Tesla magnetic fields?
1
Are there any modern cubesats or smallsats that have relied only on magnetotorquers for attitude control?
2
How strong is Sun magnetic field on Moon surface? And on Mars?
1
Could a horseshoe magnet help a satellite stay in orbit?