Do nuclear batteries emit radioactive rays while in use by satellites and shuttles?

Nuclear batteries are very small in size. Hence they find application in satellites or shuttles as a replacement to solar batteries. They also use large amounts of energy released naturally by tiny bits of radioactive materials.

If we can limit the discussion to modern RTGs used for exploration probes, there really isn't much in the way of precautions. There are precautions to prevent launch failure, and then contamination of Earth's environment. But obviously you can stand next to them as long as the fuel is in solid ceramic form. 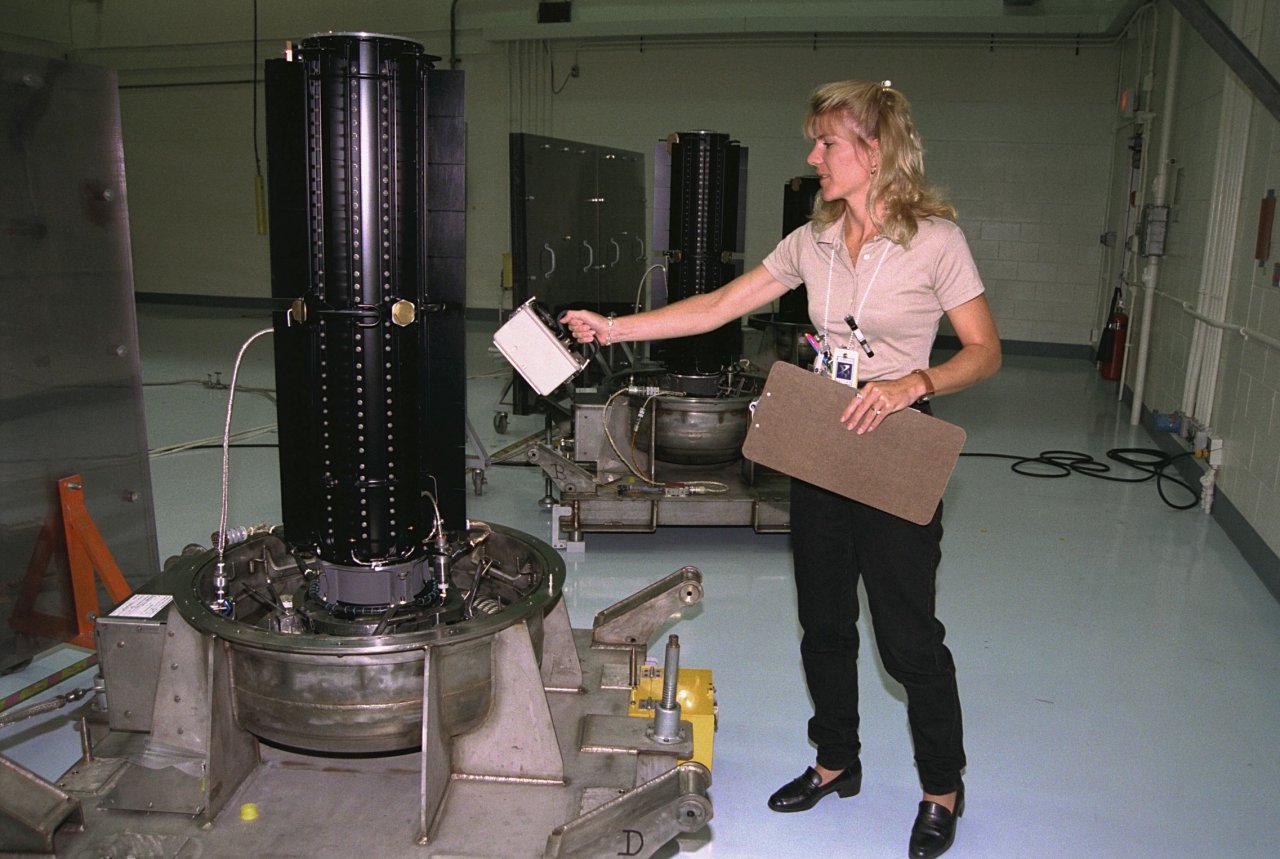 It's not obvious from pictures like this, but that worker is wearing a radiation dosimetry tube filled with polymer gel which measures occupational dose. Interested in the specifics, I found that Table 2-3 in this link gives the isotope concentration for the Cassini RTG - which is what we need to answer your question.

It contains Pu-236 through Pu-242. Isotopes are almost completely chemically identical, and because of that it's not practical to separate these, and the impurities remain. If isotope separation were trivial, we would leave nothing but Pu-238 but it's not.

Drawing the line between isotopes and activity requires looking them up in your favorite chart of nuclides. Combining the relative activities and the decay branching ratio, you can observe two things that dominate the non-alpha radiation:

This is pretty comprehensive. There's not much other radiation aside from the (intended) alpha radiation and the two above terms. The main thing this shows is that Cassini's RTG is extremely clean in terms of radiation. Sure, you would probably restrict time your engineers spend next to it, but that's not really because it presents a biological danger, it's just so that you can report a lower workplace radiation dose.

The beta radiation makes it a little further than the alpha radiation, but not by that much on a multi-ton spacecraft. It will affect the electronics almost none. It's pretty much the same for the spontaneous fission. That could create some biological concern. Fission produces a host of particles and the neutrons are particularly problematic. However, their effects will be dwarfed by the overall radiation environment in space.

However, the term nuclear battery could refer to other designs, even including fission reactors. Spacecraft with those do require shielding to be engineered into their design between the reactor and the scientific payload.

While the above answers are fine I think the question is prompted by a more fundamental misunderstanding of radiation.

Alpha: A helium nucleus. Damaging if it gets to your tissues but your own skin is a nearly perfect defense against it. Alpha emitters are only of concern if you ingest them.

Beta: An electron. These are so light that they lack much penetrating power. While they punch through better than alpha particles they're still stopped very easily--including by the container for your radioactive material. Your skin does a reasonable job of stopping them, also.

When dealing with such materials your only concern is to avoid ingesting them. It doesn't matter how much is being emitted, they're not going to do anything to you. Note that most radioactivity is of one of these forms.

The third form is x-ray & gamma radiation (the only distinction is the energy level, they are really the same thing.) X-rays take a decent amount of mass to stop--such as that vest the dentist lays on you when shooting x-rays (and their machines are in shielded rooms.) Gamma rays are simply too penetrating to stop by any portable shield--note the absence of the lead vests in the nuclear medicine labs.

Finally, there are the neutrons. They are not as penetrating as gamma rays but they're still pretty nasty and they also have the extremely nasty property of sometimes inducing radioactivity in what they hit.

When you are making a nuclear battery you not only choose alpha or beta emitters for safety but because the penetrating nature of gamma and neutron energy means it's carried away from the battery--build your battery out of something like Cobalt-60 (a powerful gamma emitter) and it doesn't produce more than a trickle of power.

The only reason you would get any radioactivity outside a nuclear battery is because nothing is truly pure and sometimes they don't even try to remove the contaminants. (Look at AlanSE's answer about plutonium batteries. To separate P-238 from Pu-239 is 3x as hard as it is to separate U-235 from U-238--as is done in an enrichment plant. Those are major facilities.)

238Pu decays by alpha emission. A charged particle like an alpha is trivial to shield against; it gets blocked by a few centimeters of air, or by a piece of paper. RTGs are enclosed in extremely sturdy cases to reduce the probability of dispersing plutonium into the atmosphere if the rocket blows up. The case will completely block all alpha particles.

However, when 238Pu emits an alpha, 29% of the time you also get a 43 keV x-ray. These would represent about 0.3% of the energy emitted by the 238Pu, the remainder being in the alphas. Although 0.3% is relatively small, a lump of 238Pu this size is going to be a heck of a hot x-ray source. However, 43 keV is a pretty low energy x-ray, so it's not especially penetrating. Some of these x-rays will be blocked by the surrounding plutonium itself. From googling, it looks like people handling 238Pu do it inside a glove box, with lead-lined gloves, plus precautions to get rid of the intense heat. In the photo in AlanSE's answer, I would guess that the woman is using a Geiger counter to survey for any x-rays that escaped the shielding. Or she may be doing some kind of routine periodic check to make sure that no plutonium has escaped into the environment.

After 238Pu decays, it becomes 234U, which has an extremely long half-life, and therefore does not emit radiation with any significant intensity.

Aboard the spacecraft, during its mission, any escaping x-rays could conceivably do mischief such as messing up computer chips. However, these probes are designed for the high-radiation environment of deep space.

In most RTG plutonium dioxide fuel is used in it’s heat-resistant, ceramic form which reduces its chance of vaporizing in fire. This ceramic-form fuel is also highly insoluble and has a low chemical reactivity.

The fuel is divided among many small, independent modular units, each with its own heat shield and impact shell.

Usually most RTG's have multiple layers of protective materials consisting of iridium capsules and high-strength graphite blocks. Iridium is a metal that has a very high melting point and is strong, corrosion-resistant and chemically compatible with plutonium dioxide. These characteristics make iridium useful for protecting and containing each fuel pellet. Graphite is used because it is lightweight and highly heat-resistant.

Most of the radiation is absorbed by these material but still some radioactive rays may escape (very very small amounts).

Not the answer you're looking for? Browse other questions tagged radiation rtg or ask your own question.