Where are Pioneer 10, 11 and the Voyagers ultimately headed?

Pioneer 10, Pioneer 11, and the two Voyagers are all headed out of the solar system. Has anybody extrapolated where they will all end up (if at all)? Is there a graphic that depicts the direction of flight of all four spacecraft?

Besides "beyond the heliopause", they are not ultimately headed towards anything in particular. The sparsity of the universe and even our galaxy means that they are unlikely to encounter much of anything without being specifically targeted for it (which is out of the question at this point).

This paper addresses this question more specifically (for Pioneer 10 and 11, at least). It states that Pioneer 10 is headed in the general direction of the star Aldebaran (part of the Taurus constellation) (which it will "reach" in about 2 million years), and Pioneer 11 "should pass close to the nearest star in the constellation Aquila in about 4 million years".

As far as the Voyagers:

This page gives a nice overview of the relative positions of these probes as of 2011: 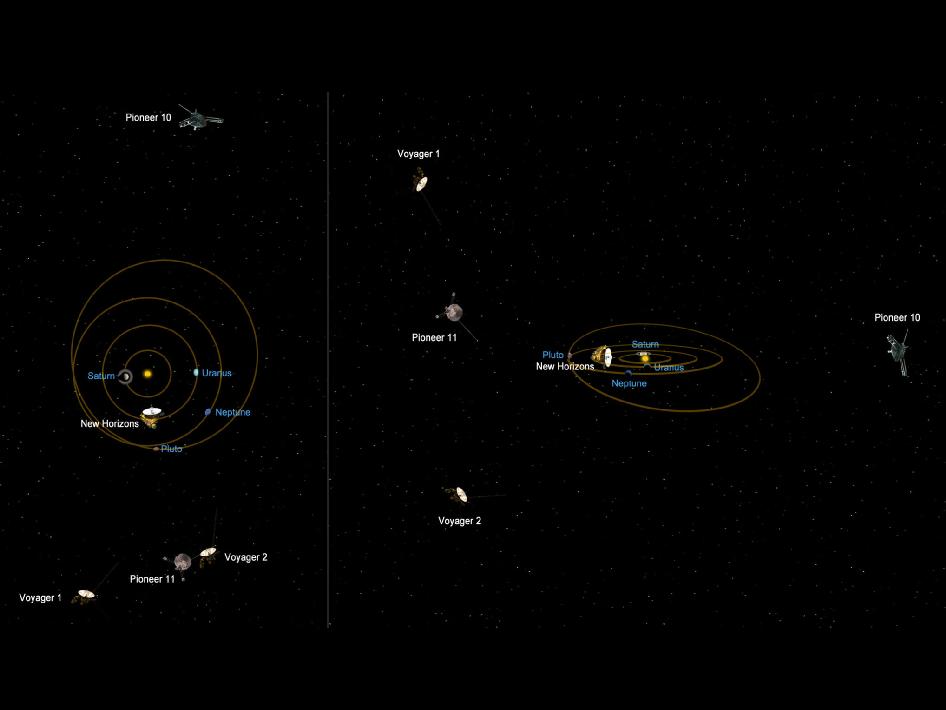 Heavens Above has a slightly better graphic, IMO: 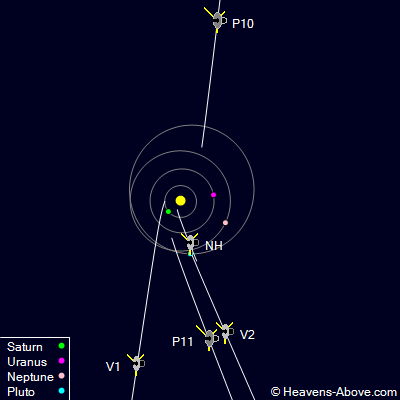 Here is a helpful image I received from Dr Lasher from one of his AIAA astrodynamics papers from the 1970's it reflects the Jupiter aim points for the Star 37E after separation from the Centaur upper stage for the pioneer spacecraft. 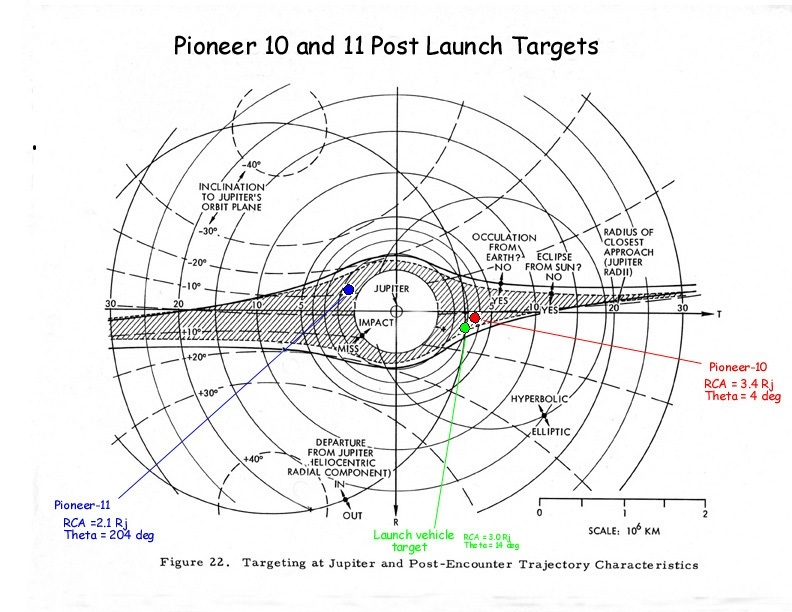 The B plane of a planet is always changing do to spacecraft incoming speed and line of flight(geometry) and epoch(time) notice the upper stage did not do such a good job with Pioneer 11 so Pioneer 11 had to do a TCM-1 to move the spacecraft over to the Hyperbolic circle on the right.so in this case the pioneer 11 Star 37E solid upper stage is in a heliocentric orbit while Pioneer 11 went to a Saturn flyby into interstellor space.

Ultimately all probes will orbit Milky Way galaxy center as independent "artificial star systems". Take for example Voyager 1. It's speed relative to Sun is about $17 ~\text{km}/\text{s}$. Milky Way galaxy escape speed at Sun's position is about $550 ~\text{km}/\text{s}$. So Voyager 1 has reached only about $3\%$ of galaxy escape speed. Thus Voyager and all other probes (they moves slower than Voyager 1) will orbit Milky Way galaxy center as an artificial star systems forever. Unless some hazardous event to probe(s) happens (collision, etc.).

Not the answer you're looking for? Browse other questions tagged voyager probe interstellar-travel pioneer or ask your own question.

23
Can Voyager 1 or 2, theoretically, return to earth if given instructions before their electronic instruments shut down in 2025?
11
Where is Voyager 1 now (2021)?

19
Are there any successors to Voyagers underway currently?
22
Where are the upper stages for the Voyager/Pioneer stages?
28
Is there any way to find and track Pioneer 10, 11, and Voyager 1, 2?
9
Why has the Earth's motion carried it out of view of Pioneer 11's antenna?
12
Did New Horizons also demonstrate the "Pioneer Anomaly"?
4
Probes on a Solar System Escape Trajectory
8
How would the Voyagers finally die if allowed to transmit to the bitter end?
3
What does it mean when the Voyagers "switch thrusters"?
19
Where will the Pioneer, Voyager and New Horizons spacecraft be after one galactic orbit?