What was the source of the fluid in Luca Parmitano's suit?

There has been a lot of press (example) and commentary about the near drowning in space of Italian astronaut Luca Parmitano on July 16, 2013. We have a question Would the blast clearing technique used in snorkeling work in an EVA situation? on how to clear the problem. But for me the bigger question is, where did the water or fluid come from? You are in a space suit surrounded by vacuum, there are not a lot of options for sources. All of the articles I have read give theories on where it did not come from. Is there any hard data on what the cause of the fluid build up was?

We don't know yet exactly what caused it, but all tests so far ruled out everything else but the PLSS (Portable Life Support Unit). In fact, just today (Aug. 27, 2013) Chris Cassidy and Luca Parmitano managed to recreate the water leak that terminated EVA-23:

Flight Engineer Chris Cassidy, along with Parmitano, performed a checkout of the spacesuit that Parmitano wore during a July 16 spacewalk that was cut short when its helmet began to fill with water. After assembling and powering up the empty suit as if it were about to go out on another spacewalk, the two astronauts observed water once again leaking into the helmet. With the issue reproduced, NASA now has a baseline configuration for the crew to begin swapping out parts for additional tests to pinpoint the problem. There are also opportunities to either launch replacement parts on upcoming cargo flights or return parts to Earth for further study once more is known about the cause of the issue. 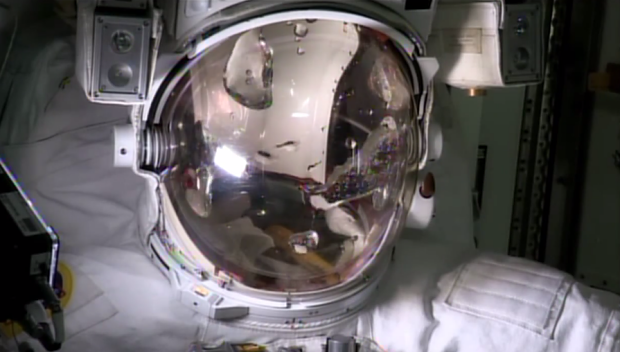 Previously, the NASA’s Anomaly Resolution Team (ART) evaluations on Luca Parmitano suit ruled out other causes and everything pointing towards the PLSS (Portable Life Support Unit). Among the remaining possible root cause are the sublimator, the gas trap, a filter clog and check valve failure, or a water separator failure.

Update: NASA made the full report on the Mishap Investigation Board investigating US EVA 23 mishap and its root causes available to the public in the International Space Station (ISS) EVA Suit Water Intrusion, IRIS Case Number S–2013–199–00005 (PDF):

In summary, the causes for this mishap evolved from (1) inorganic materials causing blockage of the drum holes in the EMU water separator resulting in water spilling into the vent loop; (2) the NASA team’s lack of knowledge regarding this particular failure mode; and (3) misdiagnosis of this suit failure when it initially occurred on EVA 22.

The source of the inorganic materials blocking the water separator drum holes had not been experienced during an EVA before and is still undergoing a concurrent investigation. The results of this investigation will ultimately lead to resolution of this issue; however, since the concurrent investigation into the source of the debris is expected to continue for many months, the MIB does not yet have the required data to determine the root causes of the contamination source, which must ultimately be determined to prevent future mishaps.

Related article on Space.com: Spacesuit Leak That Nearly Drowned Astronaut Could Have Been Avoided

There are several potential sources:

Until the final report we really won't know.

We can, however, rule out oral moisture, dislodged sweat, and cometary penetration, since the replication has shown it occurs in an empty suit.

¹: heating from direct sunlight. See insolation at the free dictionary

65
Is there no physical security in space, other than being in space?
14
Why couldn't Luca Parmitano just drink that water?
21
Would the blast clearing technique used in snorkeling work in an EVA situation?
11
Time to prepare for EVA out of ISS

21
Would the blast clearing technique used in snorkeling work in an EVA situation?
5
What would happen if you wore 'soft suit'(IVA suit) in the vacuum of space?
12
What are the requirements differences between Escape Suit and EVA Suit?
4
What is the fastest time for donning a space suit?
8
How did Alexey Leonov bleed off the pressure in his space suit?
3
Are there other "glow in the dark" Luminex wire and light-emitting patch designs for the Z-2 or any other space suit?
6
How much of a drag is it, orbiting the Earth in a space suit?