Is this what station keeping maneuvers look like, or just glitches in data? (SOHO via Horizons)

I've been enjoying the JPL Horizons web interface and after I discovered the incredibly extensive database associated with SOHO (Solar and Heliospheric Observatory, also see sohowww.nascom.nasa.gov) for this answer I decided to learn more about the satellite's orbit.

I exported a dataset of historical (and projected) orbit data for SOHO Spacecraft in 1 day steps using the following setup:

I also exported the positions of the Sun, and of the Earth-Moon Barycenter the same way.

Using the reduced mass of the Sun vs Earth-Moon Barycenter (EMB) system as:

I used the equations of motion in a rotating frame, and solved numerically for zero acceleration along the EMB-sun line (y, z set to zero):

So I made a point and called it $L_1$ and defined it as this location, so as the EMB slowly moves closer and farther from the sun over the year, my $L_1$ 'origin' will breath with it.

Finally, I un-rotated the position so that the Sun-EMB line stayed fixed with the sun on the left, so that it looks like the standard configuration for CR3BP problems.

I got a pretty nice looking trajectory! The plot isn't breathtaking - limitations of Matplotlib and the (overly-)restrictive SE 2MB limit for GIFs.

Note, x, y, and z scales are all different - this is plotted at the moment just to fit into a cube. The blob (red) on the left in the middle of the orbit is $L_1$ as defined above, and the little cigar-shaped blob (blue) on the right represents the motion of the EMB in this particular frame. I did look at a plot with EMB-fixed instead of $L_1$, but the orbit became thicker. This way is really better looking, as you'd expect. The little black dots are the first and last 20 days (data points) in the extracted dataset.

If you look closely at the "top" there's a little blip, and excursion toward the sun. I think this is the famous, frightening episode in June to November 1998 when SOHO was almost lost. There is a page of recovery docs or you can read about it in Aerospace America May 1999: Saving SOHO or the article by ESA's F.C. Vandenbussche SOHO’s Recovery – An Unprecedented Success Story or for more of the technical details; Roberts 2002 The SOHO Mission L1 Halo Orbit Recovery From the Attitude Control Anomalies of 1998.

I wanted to see if I could find the event, and other stationkeeping maneuvers in the raw data. So, just to see what happened, I plotted the variation of x, y and z in my coordinates over the interval 3-dec-1996 to 4-jul-2016, which is all Horizons would give me on the day I downloaded it. Apparently it propagates the state vector a few weeks into the future.

To look for maneuvers, I plotted the first, second and third finite difference - a numerical way of approximating derivatives. Here's what I got: 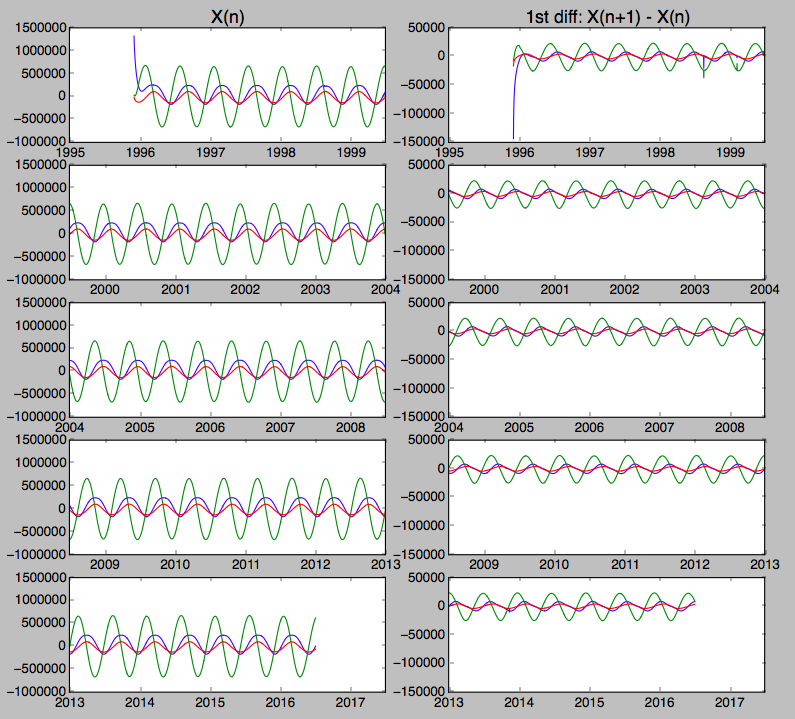 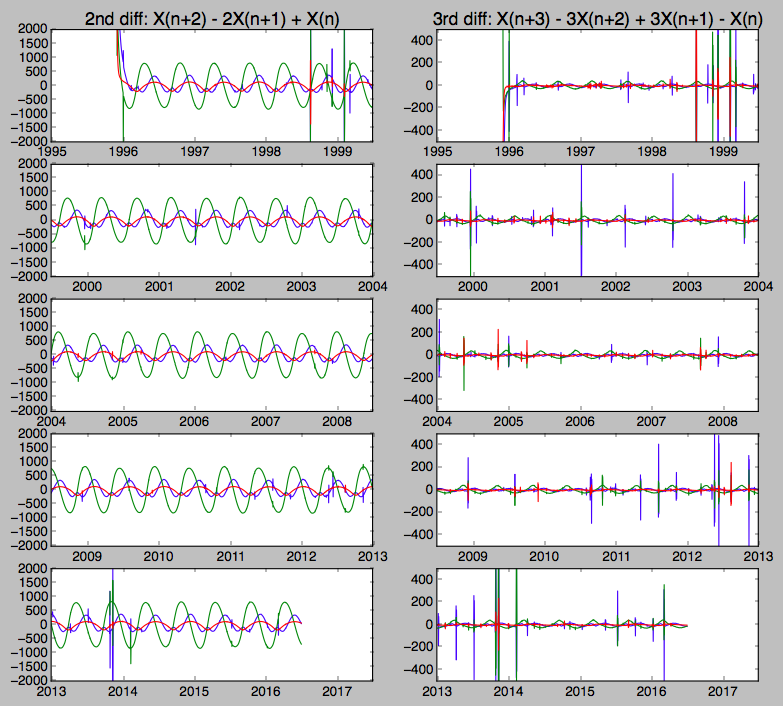 In the 2nd and 3rd difference plots, the approximately harmonic motion nearly disappears, and discontinuities become prominent. I was assuming the data was showing me station keeping (SK) maneuvers. I noticed a big zig-zag around mid-October 2014. I found SOHO-Spacecraft-Events.pdf but strangely there are no propulsive maneuvers listed around that time.

So my question is: are these zig-zags (and in particular, the one around October 15, 2014) just stitching errors in the reconstructed data, or did a particle of dark matter collide with a Higgs boson and SOHO can report the first observation? (humor).

These are also from the sohowww.nascom.nasa.gov site:

You are most likely seeing an artifact of how JPL represents its ephemerides for fast numerical computation.

JPL integrates the equations of motion over time. This inevitably results in mismatches between the integrated state and observations. These errors are used to adjust initial states and the integration is then re-performed. The cycle stops when the errors drop below some threshold. JPL then computes sets of Chebyshev polynomial coefficients that approximately yield the integrated state. Each set of coefficients pertains to some specific span of time.

Multiple sets are used to enable coverage of longer spans of time. (An alternative would be to use higher order polynomials, but that will almost inevitably run into serious numerical computation issues. Higher order does not necessarily mean greater accuracy.) JPL tries to make the transitions from one set to another be continuous, definitely with regard to position, possibly with regard to velocity, but not to second and third derivatives.

Your third differences are magnifying the discontinuities in those transitions from one set of coefficients to another. I doubt there's any physical significance to those spikes.

I just noticed that this scenario is also summarized in Horizons output as well:

Therefore, the initial state at resumption of operations 1998-Sep-25 was integrated back to August 19 assuming a purely ballistic trajectory. Trajectory errors during this interval may be significant due to unmodelled dynamics.

Stitching solutions with unmodelled dynamics is probably one of the sources of these glitches in late 1998.

Not the answer you're looking for? Browse other questions tagged lagrangian-points station-keeping jpl-horizons halo-orbit soho or ask your own question.

40
Are there any space probes or landers which regained communication after being lost?
20
How long does it take for a signal to travel between Earth, and Juno at Jupiter?
16
Could JWST stay at L2 "forever"?
18
James Webb telescope; limits to propellant lifetime?
17
Why would a Deep Space Network antenna send up a carrier signal without any data?
7
What is the required burn to keep a satellite at a Lagrangian point?
7
What asteroids have the least delta-v to reach?
9
How would you identify when an object in a Lissajous orbit needs station keeping?
6
What is this white dot and strange line in SOHO image?
9
The design of the halo orbit of the James Webb Space Telescope
See more linked questions

11
Are large halo orbits around L₁'s and L₂'s preferred over small orbits for reasons other than geometry?
17
Are some Halo Orbits actually Stable? (stable orbits about unstable Lagrange points)
1
Did ISEE-3 spend a few years in a halo orbit around sun-earth $L_1$ without using any fuel?
1
Why has the Earth-Sun libration point L1 been chosen over L2 for NEOCam (now NEO Surveyor) to detect new NEOs?
14
How to best think of the State Transition Matrix, and how to use it to find periodic Halo orbits?
4
Do Lagrange points still exist if there is significant radiation pressure on the third body from the first?
5
How does gravity change beyond L2?