In periods before human flight, did scientists, philosophers, or other thinkers seriously consider space travel and exploration a possibility?

I have come across nineteenth-century discussions of probable civilizations on other planets and I am curious if anyone seriously thought about how we might reach or contact them.

I am familiar with early attempts (i.e. Wan Hu) but I am particularly interested if there was any theoretical activity in this field before it was even remotely practical (by our standards).

NASA provides a good Brief History of Rockets which summarizes in concise form many of the historical advances in rocketry and space exploration, including Wan-Hu's unfortunate attempt at a rocket-powered chair.

The simple rocket in the form kids light on the Fourth of July, invented by the Chinese, has been generally around by the end of the 13th century, used as a supplement to more traditional armament, as in Francis Scott Keys "rocket's red glare" from the bombardment of Fort McHenry during the War of 1812.

When the western Renaissance brought in the telescope, the concept that there was space to be explored began to come into focus. Before Galileo could look through a pair of lenses at Jupiter and see its four largest moons orbiting the planet, scientists and philosophers often thought of the distant stars and planets as residing on vast transparent spheres rotating about the Earth. Copernicus' sun-centered theory of the universe shattered the awkward and never-quite-right theory of epicycles, by which astronomers had tried to reconcile, in an Earth centered universe, their observations with their mathematics.

In the early 1600s, Johannes Kepler inherits years of precise astronomical data from the school of Tycho Brahe and, after many false starts, derives his laws of planetary motion:

By providing a mathematical solution which finally agreed with the tricky orbit of Mars, Kepler proved Copernicus right. Today Keplerian conic sections are a staple of orbital dynamics and astronavigation.

In 1687. Sir Issac Newton provided the science still used for many basic tasks of space exploration:

The Principia states Newton's laws of motion, forming the foundation of classical mechanics, also Newton's law of universal gravitation, and a derivation of Kepler's laws of planetary motion (which Kepler first obtained empirically).

As to serious consideration of space travel and exploration, one should look to the putative father of space exploration, Konstantin Tsiolkovsky. His 1903 publication, Exploration of Outer Space by Means of Rocket Devices and subsequent writings proved (for the first time) that a rocket could perform space flight, calculated the speed required for a successful Earth orbit and escape velocity, introduced the concept of the multistage rocket and liquid fuel/oxidizers.

This is what is being referenced when you hear the phrase, on this site and many others, "the tyranny of the rocket equation." You can find a good discussion here, and I'll use the answers from that question to briefly explicate. Since your exhaust velocity is a constant, in order to achieve linear increases in $\Delta v$, you need exponentially greater mass ratios. The devil is the natural logarithm function. Here's a graph: 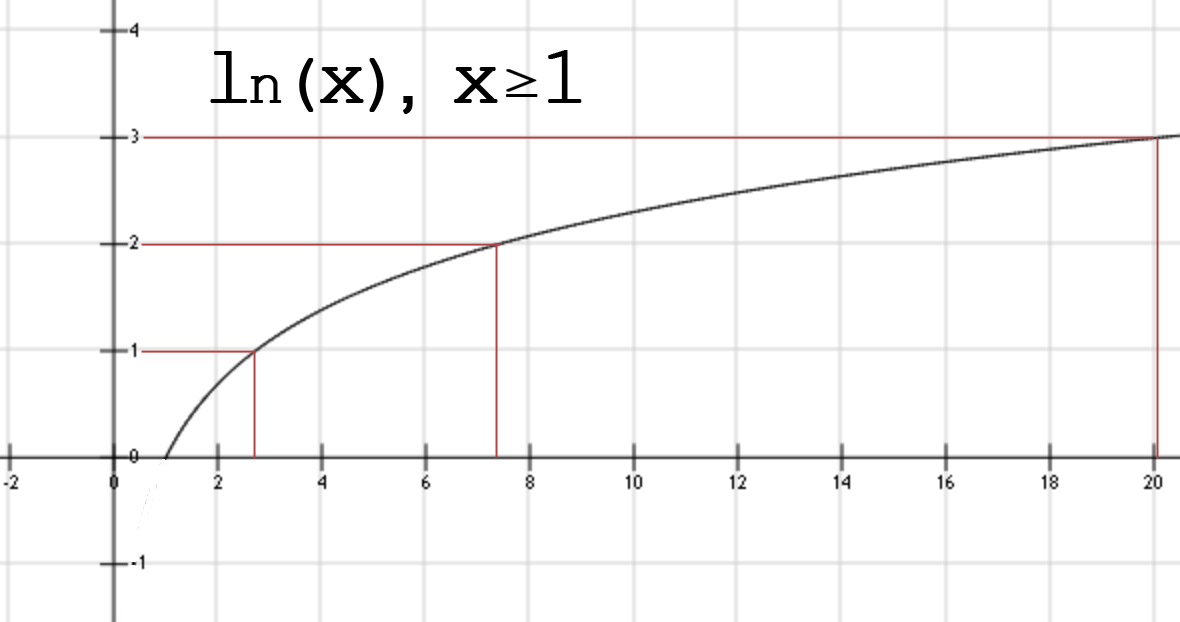 The mass ratio is always going to be greater than one, so I've ditched lower values. You can see that to get one unit of $\Delta v$ an approximate mass ratio of less than three; to double it you need more than seven; to triple it you jump to over 20. Rather than try to engineer absurdly high mass ratios, rocket research tries the more rational approach of finding engines, such as ion thrusters, that substantially increase the exhaust velocity.

There are also a number of examples from fiction. To give a few interesting examples:

Not the answer you're looking for? Browse other questions tagged rockets history reference-request or ask your own question.

15
Is this a correct understanding of Tsiolkovsky's rocket equation?