Can you ride a bicycle on Deimos?

Deimos is the small moon of Mars. The surface gravity is 0.003m/s2 (compare to Earth @ 9.807 m/s2). In theory a person with a bicycle could launch from and land on Deimos with a bicycle and a ramp.

A variation of the loop below, could in theory, be used increase traction on Deimos for take off and landing. 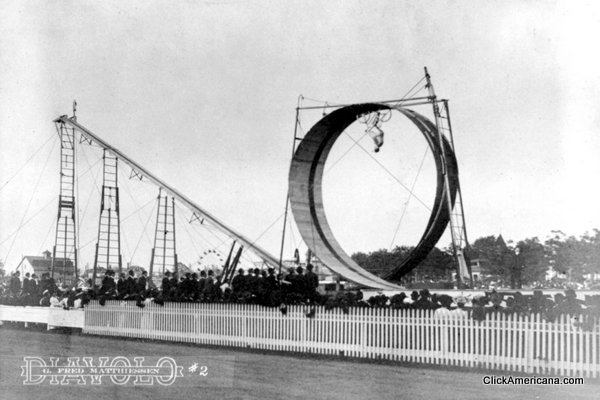 But would you actually be able to ride a bicycle on Deimos? With only human power would there be enough friction to move forward or turn?

At that surface gravity, I don't see how it would be possible to ride a bicycle. The friction between the tires and the road is how the motion of the wheels is converted to motion of the bicycle and the rider.

0.3 milligee is practically no gravity at all. It would take 80 seconds to fall to the surface from a height of one meter - not so much a fall as a lazy drift. I don't think a person could even walk effectively on the surface of Deimos.

The loop must be ferrous. Your bike needs strong magnets in the wheels. You will start out with low friction and have to pedal very gently but as you build up your speed your friction will increase. Arrange the loop so you can go round and round as many times as you want before leaving it. You could build up substantial speed that way, plenty sufficient for an escape orbit.

If your guidance was good enough you could land the same way--enter the loop and gently apply your brakes. You wouldn't have much margin, though, I can't imagine such a landing system ever being actually used.

I think, if you assume a flat surface, nothing would physically prevent a bicycle being ridden, slowly, on Deimos.

In particular friction is not a problem: friction limits the amount of force the tyres can exert on the ground, but the force you need is extremely low if the acceleration you need is extremely low, which it is. Riding a bicycle is something where things scale with $g$: a bicycle can be ridden for any value of $g > 0$, you just have to ride it with acceleration (and, ultimately, speeds, if you don't want to reach escape velocity on the surface) which scale like $g$. This is all perfectly possible.

I think the problem would be getting a human to do this. We have spent a long time evolving for life on a planet where the $g \approx 9.8\,\mathrm{m/s^2}$ so we've evolved around the kinds of forces, powers and time constants to allow us to walk (and ride bikes) on Earth. To do it on Deimos you'd have to wind all this back by a huge factor, which would mean that a lot of things we do unconsciously in fractions of a second you would now have to do consciously over many seconds. My guess is humans would find that extremely hard. Perhaps robots could be taught to ride bikes on Deimos (pretty sure there's a science-fiction story here...).

On the other hand people can learn things pretty well, and there's plenty of time: the time taken for things to happen scales like $\sqrt{1/g}$, so if you assume you need to correct things on Earth in a fifth of a second to ride a bike, then on Deimos you'd have around ten seconds to think. The problem would be suppressing your reflexes. So I'm not willing to conclude humans couldn't do it, just that it might be hard.

Of course, in real life the surface is not smooth which would make things much more exciting. And also riding a bike would be really slow, especially on a non-smooth surface: if you wanted to get anywhere quickly better to jump.

One argument which is not true is that you couldn't ride a bike because bikes are stabilised by the gyroscopic forces from the wheels. They may be, but what is certainly the case is that humans can hold a bike up while it is effectively stationary (this is much easier, and may only be possible, if the bike is facing up a hill, or has no freewheel), so you can ride bikes with no gyroscopic help.

Not the answer you're looking for? Browse other questions tagged propulsion gravity reduced-gravity-sports deimos or ask your own question.

26
Could a Human reach escape velocity by jumping from the surface of Ceres (a dwarf planet)?
6
Creating your own artificial gravity by running. (Part 1 - the basic idea)
6
Riding a bike on the moon
11
Designing a bicycle for Mars?
3
Can you use a light sail to achieve a survivable landing anyplace in our solar system?
1
Very Low Gravity Bicycle

40
If the Apollo mandate were delivered today, would the mission vehicle(s) and profile be similar?
4
What delta-v is required to move between Phobos and Deimos?
11
Designing a bicycle for Mars?
6
Is there any footage from Mars where you can see Deimos or Phobos getting bigger and smaller as it goes through the sky?
71
Can a human land on Deimos using pressurized deodorant cans?