Why are Europe’s Air & Space Academy and DLR urging ESA and CNES to reconsider the use of solid fuels for the proposed Ariane 6?

With Ariane 6 launch site selected, CNES (Centre National d’Etudes Spatiales, the French space agency) was aiming to freeze the design of the new rocket in May 24, 2013. A few days after and that same month (May 30, 2013), Europe’s Air & Space Academy “urged to halt work on the Ariane 6 design” and among reasons brought forth, in their view, the wrong choice for the first two stages propellant:

On May 8, 2013 Europe’s Air & Space Academy sent a letter to the ESA director general Jean-Jacques Dordain, in which it urged ESA to “urgently reopen the configuration studies” for Ariane 6. 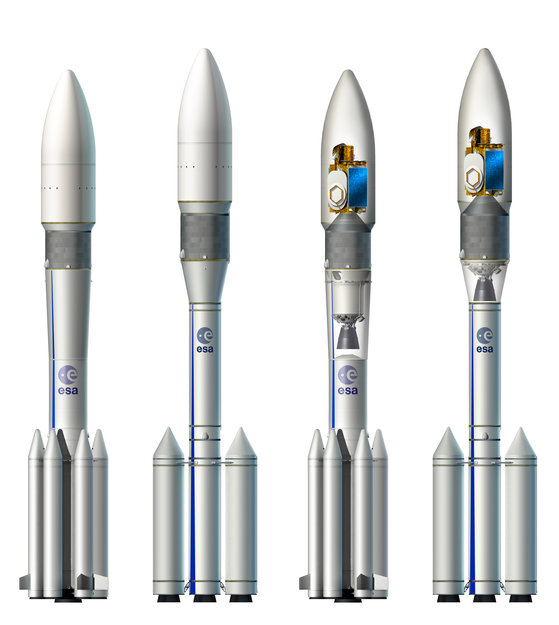 Some of the Ariane 6 concepts under investigation (Source: ESA)

Among other objections to the proposed Ariane 6 design, Air & Space Academy gave the following reason for not using solid propellants as being “the wrong choice”:

Two solid-fueled stages topped by a cryogenic upper stage is a dead-end design that does not permit the flexibility needed in a rocket that will serve as Europe’s main launcher for several decades.

This however seems rather argumentative. Granted, solid- versus liquid-fueled rockets debate among engineers is as old as the spage age, but besides most current launch vehicle designs using liquid and/or cryogenic rocket stages, is there any non-disputable evidence the choice of one is better over the choice of another?

ESA aims to develop a per launch cheaper, simpler design launch vehicle with Ariane 6, and the use of solid propellants seems rather obvious to me, which just so happens is also a firm belief of the ESA launcher director Antonio Fabrizi. ESA estimates a per launch cost of around €70 million, something the academy disagrees on, but still quotes significant savings compared to Ariane 5:

The academy estimates that today’s Ariane 5 ECA rocket costs 145 million euros per launch. The solid-fueled Ariane 6 will likely cost 98 million per launch, at least at the outset. It will be difficult to cut costs to arrive at the announced target.

Right. So the cost savings are still there and they are substantial regardless of whose quotes we believe. So this “solid- versus liquid-fueled rockets” isn't as intuitive as I would've hoped, after reading so many articles on the Ariane 6 dispute.

Let's see, if we can get some additional perspective, though. On July 12, 2013, it was announced that Johann-Dietrich Woerner, chairman of the German Aerospace Center (DLR), said the German government remains in favor of continued development of the current Ariane 5 heavy-lift rocket, with possible evolutions including environmentally acceptable new fuels in place of the vehicle’s current solid-rocket boosters. He goes on to say:

... solid propellant carries other disadvantages, including the fact that a solid-fueled second stage adds vibration risks to sensitive satellite payloads and also pollutes the upper atmosphere.

The statement regarding "vibration" again seems a bit argumentative, but is that even true? And while the environmental concerns seem a bit more fair, is that really such a problem, and why mention upper atmosphere pollution only?

So, to recap, my questions are:

In essence, I'm looking for answers that will provide more insight into this age old engineering debate on “solid- versus liquid-fueled rockets”. Ideally, the ESA / CNES design choice for the Ariane 6 should be discussed, and if possible, avoid or completely dismiss / invalidate politically motivated arguments, such as:

Woerner said that for this kind of scale economy to work, all the Ariane 6 solid-fueled boosters would need to be made in the same place. Given today’s European industrial landscape, he said, that would mean in Italy.

This quote just smells of local industry favoritism and should, without substantial evidence that "liquid" is the way to go in favor of "solid", be easy enough to dismiss as such. Or is there more to it than meets the eye?

Okay, here's the general break down in Solids vs Liquids debate, with a bit of help from Wikipedia, ESA, and NASA:

Solids- Solid fueled rockets must be manufactured in a controlled environment. If not constructed properly, they can have impurities resulting in uncontrolled expansions (Explosions). They are safer generally speaking than Liquids, and don't require any special precautions. The on pad requirements are simpler. Most model rockets are solid fuel, and in fact, all they really need is a source of ignition, plus verification of the equipment. They do not have the ability to throttle on demand, although they can be built in such a way to throttle according to a pre-determined rate. They can be stopped at any time by ejecting the solid core. The rocket requirements around the engine are rather loose, and there aren't really any moving parts, aside from a usually throttleable nozzle and fins for atmospheric use.

Liquids Most liquid rockets are either cryogenic or toxic, requiring at least some component to be loaded at the rocket pad. They are throttleable upon demand, allow for more flexibility in the event of an issue, and can be stopped and restarted. Usually it is not safe to be near a fueled liquid rocket, usually requiring evacuation of the pad prior to fueling. This fueling requires extra work in the last minutes. Liquid rockets are generally speaking more complex, but usually offer better ISPs than solids.

Okay, so when you are wanting to launch a rocket to orbit, why would you want one vs the other?

Solid- Usually slightly cheaper and easier to use, usually less massive overall. Could allow for quicker re-use of the pad.

Liquid More flexible in the event of an issue, allows for a broader range of missions.

Using solid rockets for the first stages could improve the capabilities, as the Space Shuttle demonstrated, but the upper stage should be liquid or at least Hyrbid, or else you won't get the accuracy that is desired.

Vibration Liquid fueled rockets burn at a very continuous rate, and thus have relatively few vibrations. Slight impurities in the solid fuel can cause the burn rate to vary, causing a higher level of vibrations. In particular, trying to get fine course adjustments with a solid fueled rocket is very difficult, causing extra vibrations in the process.

Toxicity Most liquid rockets exhaust is either water or other natural chemicals, resulting in minimum damage from their exhaust. Solid Fueled rockets have slightly more exotic exhaust, which will cause more damage than water, but still are relatively benign. Bottom line here, it depends on which type of fuel you use, there are good and bad options for the environment among each. Liquids tend to be more extreme in the good/bad than solids, which tend to be more consistently middle-of-the-road.

This is a pretty interesting question in retrospect now.

When it was asked in 2013, booster re-usablity was just a gleam in SpaceX's eye. The first Falcon 9 attempt to land a booster wasn't until 2015. But clearly SpaceX's pricing was already a problem for ESA, the Falcon 9 is roughly equivalent to the Ariane 5 in launch capacity, but have always been priced at about 1/3 an Ariane 5 price. So one question is, how did SpaceX have such a massive cost advantage before it even mastered re-usability?

One important reason for the SpaceX's cost advantage was liquid fueled rocket engines. SpaceX designed the Falcon 9 with nine identical Merlin engines, and one minor variant, the second stage vacuum Merlin. They launched twenty two Falcon 9 rockets from 2014-2016 without re-using any. That required building over 70 Merlin engines a year. Essentially they turned what was previously a hand built process into an assembly line with all the advantages that brings. Higher assembly productivity, standardized parts can be purchased/built less expensively than custom parts, a regimented process that produces uniform products, and the ability to improve the process and the product over time.

That improvement clearly happened in the end product. The first Merlin engine (for the Falcon 1) only produced 100,000 lbs of thrust, the current (FT) version generates 210,000 lbs.

Solid rocket engines have no moving parts, are simple to make and difficult to improve. Even if SpaceX had settled on nine solid rockets for it's first stage, there would have been much less opportunity to improve them or lower their costs.

The other obvious answer that wasn't addressed by the other respondents is booster re-usability. Not throwing away your boosters every launch is a potentially huge, Elon Musk once claimed the fuel costs for a Falcon 9 launch was only $200,000, or about 3% of the launch price.

ESA understood both the opportunities of re-usablity and manufacturing volume. In fact their commitment to large rocket engines may have cost them the ability to do re-usablity. According to wikipedia (using that as a link because original source is in french).

"Con-current with the Liquid fly-back booster research in the late 90s and early 00s CNES along with Russia concluded studies indicating that reusing the first stage was economically unviable as manufacturing ten rockets a year was cheaper and more feasible than recovery, refurbishment and loss of performance caused by reusability.[36] It was suggested that with Arianespace launch cadence of 12 flights per year that an engine that could be reused a dozen times would produce a demand for only one engine per year making supporting an ongoing engine manufacturing supply chain unviable."

Using only one engine per launch means twelve launches a year doesn't develop nearly the same manufacturing volume to improve engine costs and performance. Using solid rocket boosters to complement means you can only fly back the core booster, so re-usability would only save a much smaller part of your launch stack costs.

I think you already know the answer, it is not really a technical issue, it is (mainly) political. The Germans have experience with liquid engines (they make major parts for the liquid main engine of Ariane 5) and the Italians have experience with solid fuel (they make part of the solid boosters for Ariane 5 and the majority of the solid fueled Vega-rocket). There are others involved in the different engines but that is the basics. The French (although also involved in the liquid main engine) probably have a preference for solid fuel because there is a direct relationship between the solid boosters of the Ariane 5 and the French submarine-based nuclear missiles.

Quick comments on your recap:

To finish. The real problem for Ariane 6 (and 5) is that none of them can compete with SpaceX. Europe should really try to bypass the political inefficiency the same way as NASA is trying to do, with real free market competition.

Not the answer you're looking for? Browse other questions tagged rockets esa planning ariane pollution or ask your own question.

5
Which launch sites were considered for Ariane 6?

15
Why did the ESA choose SPARC for LEON?
5
Which launch sites were considered for Ariane 6?
21
Could 3D printing be used to achieve perfect grain geometry of solid and hybrid rocket motors?
15
How are self-destructs implemented in rocketry?
13
Why are rocket mass on the launch pad and payload mass to LEO not strongly correlated?
7
Why Proton launcher for ExoMars, and not Ariane?
17
Why did the Vanguard rocket use a solid engine for its third stage?
6
If the ESA has its own deep space network, why does it use NASA's?
8
Why aren’t rocket stages modular and interchangeable?
2
How many times is a single rocket engine tested?