Could an ISS astronaut photograph something like this 1km "Van Gogh" if they knew it was there?

At the end of December 2015, a giant "painting" made of 4 million color-sorted recycled bottles was put on display in Keelung, Taiwan. The Indian Express says it's 53 hectares, which is 530,000 square meters, so it's probably roughly 0.5 x 1 km in size. At 400km, that makes it roughly a quarter of the diameter of the moon visually - if I've done my arithmetic correctly.

As a reference, the 3U Cubesat PlanetLabs Doves have a resolution of 3 to 5 meters.

If they knew about it, could an astronaut on the ISS have been able to photograph some artificial, artistic pattern similar to this either with a hand-held camera (with a long lens) or with the downward-pointing telescope on the station?

I understand that either the hand-held camera or the telescope might need to be moving to compensate for the relative motion between the ISS and the surface. Besides various forms of architecture and civil engineering, has any art on earth been photographed from the ISS? 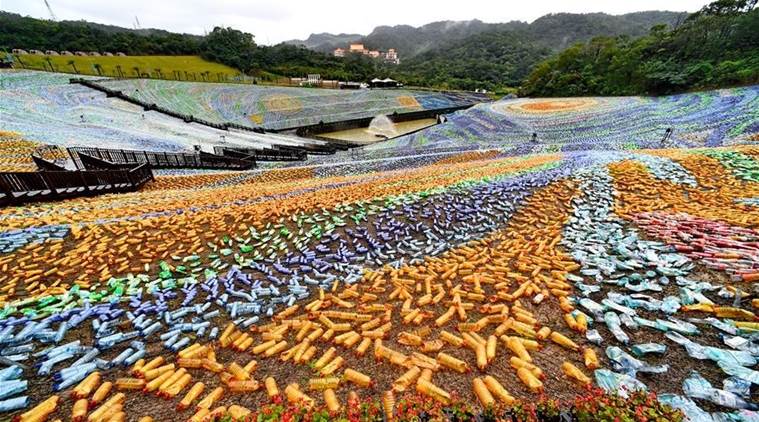 I like @PearsonArtPhoto's answer, though the considerations about exposure time may not be correct. I was looking for something more visual.

During his year in space, Scott Kelly took tons of photos, one of New York from straight above at night. And Central Park is about 4.07 × 0,86 km² in size, which means its small side is roughly as long as the long side of the Van Gogh.

So here is the picture from Manhattan with the Van Gogh above Central Park. The Van Gogh was scaled by a factor derived from the size of the original, of Central Park in reality, and the pixel size of Central Park on the photo, so it's quite exact. (Width: 105px) I blurred the right one until I felt that its sharpness is about the same as that of the entire image.

Finally, I cropped the picture to the interesting area, but didn't scale it. 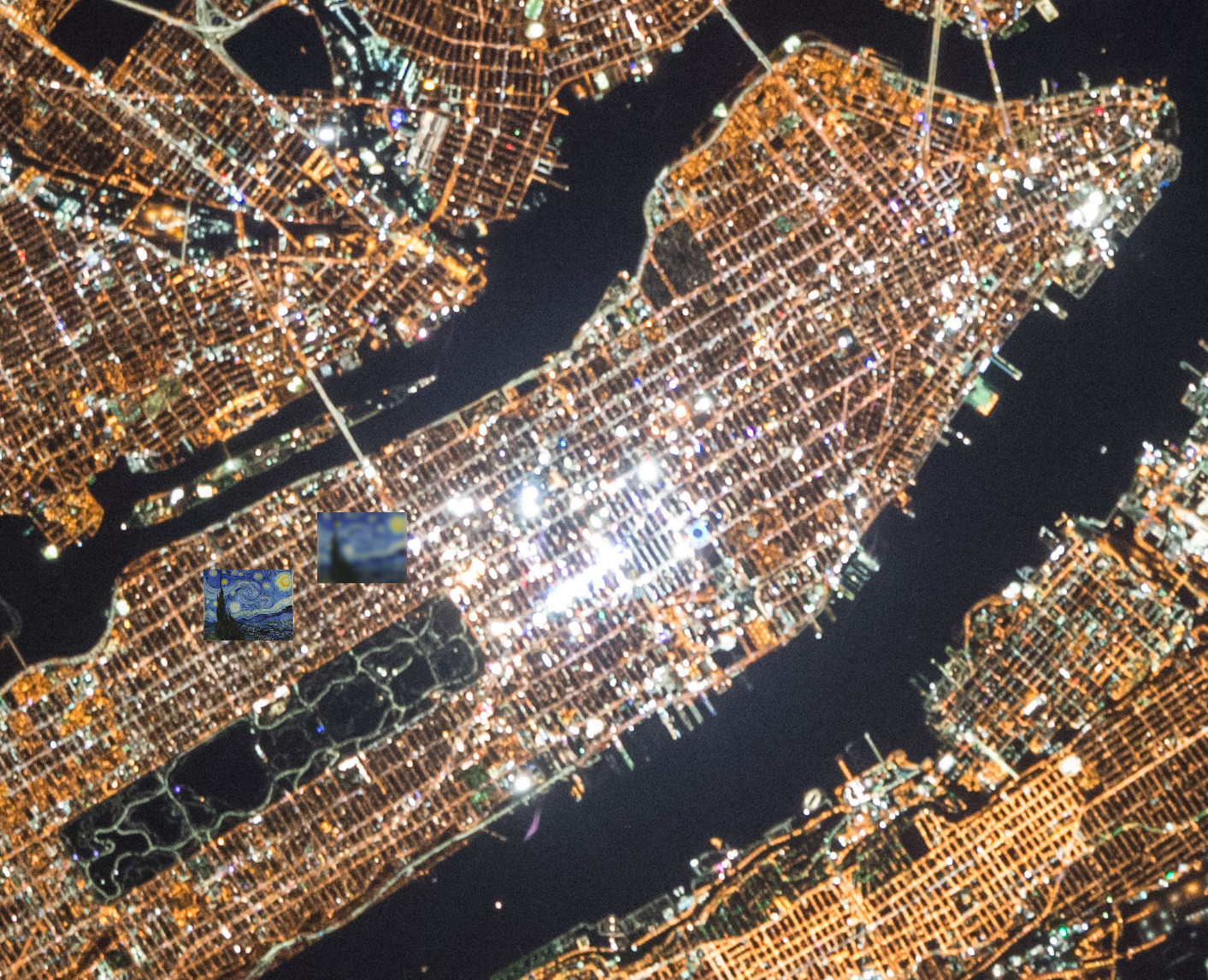 What's quite interesting now is the EXIF data of the photo:

However, sharpness of a lens is limited. You can't increase sharpness by using smaller and smaller pixels. While I think you would get a sharper image with the 800mm plus teleconverter, you would not gain more sharpness with an other camera.

Playing with the numbers, the Van Gogh would still be small compared to the entire photo size, but large enough to be noticed. Sharpness is limited, but looking at the level of detail of the photo, the Van Gogh should be recognizable even when photographed with a 400mm lens.

The ISS, at it's closest, is, say, 500 km (Can be a bit closer, but let's not stretch it). That would require a FOV of 1/500, or about 0.1 degrees. That would require a camera with a lens of about 20000 mm to get a full view, given a standard sensor. That isn't going to happen! But still, a low resolution view of the image is entirely possible. The ISS's best telephoto lens is an 800 mm lens with a teleconverter to 1120mm, and with a crop factor, it's FOV is about 1.2 degrees apart. So if you have a, say, 20 megapixel image, about 200,000 pixels will cover the image, which is manageable.

Okay, so how fast would such an image need to be taken to minimize distortion? Let's try to limit distortion to 10m, which is probably a bit high for such an image. The space station moves at 7667 m/s. So you'd have to get the image in around 1/1500th of a second. Most cameras have something called a shutter sync. I've checked and some of the ISS cameras are at 1/8000th of a second, so a high shutter speed image could be taken that would image it.

To my knowledge, no such thing has been photographed from the ISS. They simply don't have the resolution to really do it justice. But there are several art worthy photos taken, if you look around, of places on Earth.

Loosely on the theme of art photographed from space:

A set of temporary floating piers have recently been set up on Lake Iseo, Italy as a piece of interactive art.

An animated picture from the Sentinel 2A satellite has just been released. This shows the bright yellow piers (and a few stages of construction). The piers are 16 metres wide and covered with bright yellow fabric.

Note - this isn't from the ISS though. A version taken by hand might not match the resolution shown here.

Not the answer you're looking for? Browse other questions tagged iss imaging earth-observation space-art or ask your own question.

55
This image of the Space Shuttle is truly beautiful, but is it real?
11
Are pictures taken from ISS geolocalized?
9
Can ISS astronauts see the lava from the Kilauea volcano at night?
3
How big would a QR code have to be on my roof for a satellite to be able to scan it given today's allowable resolution?
7
Is there a telescope on board the ISS?
3
Hyperspectral Imaging from Low Earth Orbit
1
Earth’s Orbit speed and apparent motion question
0
Could folks in space see giant projections of art on mountains like this one? Was this one seen or recorded?

1
Could you enter this building when it was over New York City?
6
How well could the ISS attitude control system detect periods of astronaut activity?
4
What is this object outside the ISS that looks like a loudspeaker?
4
Since there is no proper "ceiling" in the ISS where do they put the lights?
3
Is this ISS artwork old but accurate? Was there a radiator that looked like this once?
15
Why was there a miniature bread on the ISS?
16
Have there ever been any incidents where something valuable was unintentionally throw out with the trash?
1
Did anybody on the ISS photograph this partial eclipse? How long did it last? How did they safely photograph it?
0
Could folks in space see giant projections of art on mountains like this one? Was this one seen or recorded?