Besides HST, JWST and stations, are there any examples of satellites designed for service in space?

NASA has no plans to service the $8.7 billion James Webb Space Telescope (JWST), but it has not completely closed the door on the idea as it prepares a rigorous series of tests designed to ensure in-space repairs will not be needed. When the 6.5-m (21-ft.) telescope launches to the Sun-Earth Lagrange point (L2) in 2018, its launch interface ring will carry optical targets that could be sought out by a servicing robot’s machine vision as it approaches to attach itself in order to make ...* (my emphasis)

The Hubble Space Telescope (HST) was robotically deployed from the Space Shuttle under direct local control by the astronauts on the shuttle. There were five further service missions using the shuttle using a combination of work by astronauts in suits and astronaut-controlled robotic maneuvers. The HST was designed (at least in part) for servicing - in some cases modules could be pulled out of racks and updated or replaced, for example.

It's possible the James Webb Space Telescope (JWST) might have some features like that, but probably not to the same extent as the HST, since 1) it will be much farther away and there is not currently any manned or robotic mission activity to earth-moon (or any) libration points, and 2) the design is optimized for things like weight, reliability, performance and thermal management, rather than easy access. Since it is designd for infrared wavelengths, a substantial fraction of the systems must be maintained at low temperature.

There are several answer given to the question The JWST - What happens if/when it breaks?. Interestingly all of the answers only address service by astronauts. Now the NASA Satellite Servicing Capabilities Office, has announced and described the Restore-L mission - a first test and demonstration of completely robotic service and/or repair.

The answers and comments associated with question What satellites did the Shuttle retrieve from orbit? contain references to on-orbit repairs to satellites (presumably) in LEO carried out by astronauts using the shuttle's robotic arm Canadarm 1. But I'm not sure if those satellites were serviceable by design or luck, and this comment speaks to that.

Thus my question: Besides HST, JWST and stations, are there any examples of satellites designed for service in space?

Let's exclude all past/present/future space stations and anything else that has been designed specifically for astronaut activity.

I've tried to use the infinitive form for the question, so the answer can include past, present, and future satellites, but let's keep it near-future and well-planned, and exclude the hypotheticals.

The Educational Outreach page of the NASA Satellite Servicing Capabilities Office shows a YouTube video which contains an animation of robotic satellite repair. For more discussion see Is Landsat-7's propellant resupply port “robot-ready”? (Restore-L mission) and associated answers. Here is a GIF reconstructed from frames of the video:

A family of spacecraft in the 1980s were designed around the Multi-mission Modular Spacecraft (MMS) bus. This bus was designed specifically to allow for retrieval and repair of the spacecraft by the Space Shuttle. (reference)

As far as I know, the only MMS-based satellite that was actually repaired by a Shuttle mission was the Solar Maximum Mission. This spacecraft was disabled by failures in its electrical system, and was retrieved and repaired (not without some associated drama) by Shuttle mission STS-41C. 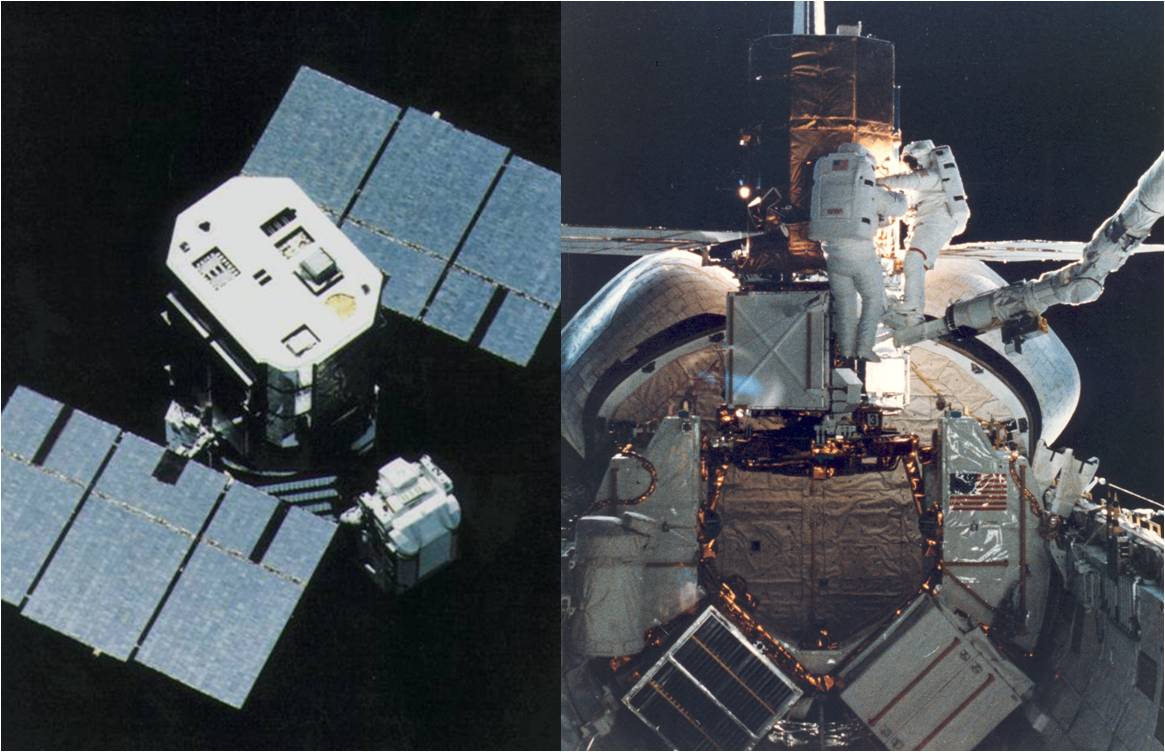 Incidentally, 41-C was a prime example of an ambitious pre-Challenger accident Shuttle mission, featuring an untethered EVA by an astronaut flying the Manned Maneuvering Unit, near-real-time replanning of robotics operations, and deployment of a science satellite, the Long Duration Exposure Facility. It was also the first mission to fly a "direct insertion" ascent, obviating the need for an OMS-1 burn.

Quite a bit of footage from this mission showing the capture and repair is included in the early IMAX film The Dream is Alive.

Unlike Hubble, JWST is not designed for service.

The only preparation for servicing are the targets on the launcher interface ring. Those are just some stickers they can add to the surfaces around the interface ring, so that's trivial to do. All the difficult work hasn't been done.

There are no big access doors for easily swapping instruments (unlike on Hubble), for example. No handholds for astronauts to grab.

The launcher interface ring is not a docking ring. It's just a sturdy piece of metal that a servicing mission might be able to grab with a fixture that has to be custom-designed for such a mission.

From the only time those targets were mentioned:

After some confusion at the briefing, though, NASA officials didn’t entirely rule out the possibility that it could be serviced in some kind, but suggested it was highly unlikely. Ochs said that Webb’s launch interface ring, which connects the spacecraft to the launch vehicles, will have targets added to aid in any docking by a future spacecraft. “I think the story we have to tell, the record of performance that we have, should stand us in good stead,” Bolden said.

At the same time, they suggested any servicing would be unlikely. “There’s no plans for anything needing servicing for the mission,” said Eric Smith, the Webb program manager at NASA headquarters. “If the unthinkable happens and we have to do something, it would require an entire design effort for such a mission. At that time, the agency would have to make a decision about whether it’s worth going up there.” It would, he said, depend on exactly what went wrong with the spacecraft and the feasibility, and cost, of repairing it.

NASA does not consider JWST to be serviceable:

Because Webb, like virtually every satellite ever constructed, will not be serviceable it employs an extensive seven year integration and test program to exercise the system and uncover any issues prior to launch so they might be remedied. Unlike Hubble, which orbits roughly 350 miles above the surface of Earth and was therefore accessible by the Space Shuttle, Webb will orbit the second Lagrange point (L2), which is roughly 1,000,000 miles from Earth. There is currently no servicing capability that can be used for missions orbiting L2, and therefore the Webb mission design does not rely upon a servicing option.

Not the answer you're looking for? Browse other questions tagged robotic-missions in-space-repairs restore-l or ask your own question.

18
Why do space agencies invest more in flyby probes rather than orbiting satellites?
18
The JWST - What happens if/when it breaks?
23
What satellites did the Shuttle retrieve from orbit?
13
What happens to JWST after it runs out of propellant?
12
Why Orion can't be used to service JWST?
12
Is it possible to refuel the James Webb Space Telescope?
6
Is Landsat-7's propellant resupply port "robot-ready"? (Restore-L mission)
4
Satellite retrieval, fix and deploy possible remotely?
6
Suppose Hubble needed to be fixed by replacing an accessible module again and NASA called for help, what are the most likely mission proposals?
3
Is satellite retrieval still relevant given the progress of in-orbit service?
See more linked questions

3
Can a cubesat in orbit be operated like a R/C airplane in real time?
6
Is Landsat-7's propellant resupply port "robot-ready"? (Restore-L mission)
17
Are satellite repairs in orbit still being performed nowadays?
5
What are the future prospects for spacecraft autonomy
3
Is satellite retrieval still relevant given the progress of in-orbit service?