What's the atmospheric drag coefficient of a Falcon 9 at launch (sub-sonic, large fairing)

While I said just a few hours ago that "There's almost no such thing as a dumb question! this one just might sound like one.

I'm making some slides about first principles thinking applied to engineering problems, and Elon Musk has several good quotes, one for example at a TED talk where near the end he says something like “...boil things down to their fundamental truths and reason up from there.” I'm using both Tesla model S and Falcon 9/Falcon Heavy as examples.

For the Tesla Model S, you can get the approximate required battery size easily from a range and speed (400km, 110kph), cross-sectional area (25 square feet), and drag coefficient of 0.24, plus the rolling resistance of good tires, 90% overall efficiency and another kilowatt or two for air conditioning, computer&display, and maybe some music.

I wanted to add the drag coefficient of a Falcon 9 rocket as a tangential comment only. I don't need an exact number, but something in the ballpark, and I have no idea where to begin.

Assume sub-sonic, flying straight, with a reasonably large payload fairing. It doesn't have to be a Falcon 9 - any rocket somewhat representative is fine.

If there is a plot of drag coeficient vs speed that extends to supersonic, that would be really very helpful also. This is back-of-the-envelope I'm doing here.

Is it better or worse than the "Long Cylinder" below? 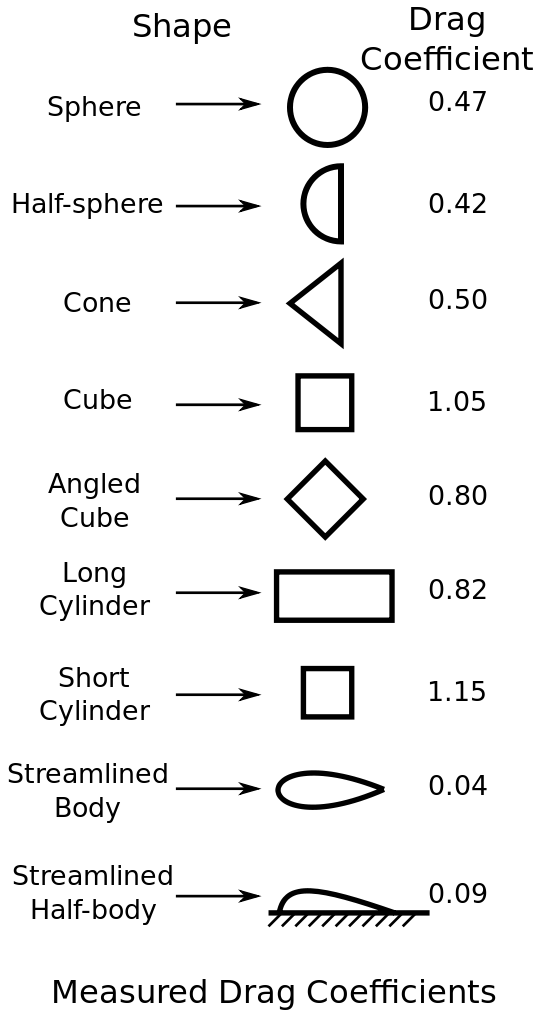 It's much better than the long cylinder from your example, because its drag is dominated by the flat face on the front. Count on 0.25 for a long cylinder terminated by a nose cone (maybe a bit more due to the reduction in diameter below the fairing).

Not the answer you're looking for? Browse other questions tagged spacex falcon-9 atmospheric-drag aerodynamics or ask your own question.

3
Does anyone know how the Flight Club website simulates Falcon 9 launches?
11
What definition of “LEO” does SpaceX use when specifying payload capability?