Will suits worn on Mars lose kilograms of “expendable water” each time they are used?

In this excellent answer I learned that space suits from the Apollo missions and even when used in space walks from the ISS today use water sublimation to remove both body heat and other heat generated inside.

In this document - one of the sources linked in that answer - it says: 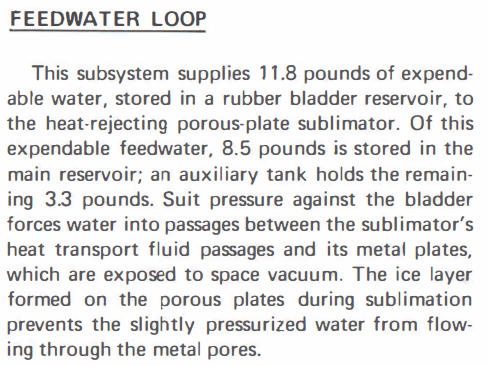 The concept of having ten pounds of extra, or "expendable water" to lose every time you go outside to the Martian surface seems a little out of reach, at least for early missions or adventure.

The Enthalpy of Sublimation of water is about 51 kJ / mole , or about 2.8 million J/kg or 2700 BTU/kg. Suit electronics and mechanics will be much more efficient and therefore cooler than they were in 1970. For a nominal 1000 BTU/hour, assuming 70% overall thermodynamic efficiency of the sublimation system (just a guess), that means expending water to the Martian atmosphere at 0.5 kg per hour.

Is this actually what's probably going to happen if/when there are suited people walking around on Mars? Maybe there will be modular ice packs sitting around on the surface that one could swap out regularly, with a water-lossy sublimator as backup only?

Edit: Both human bodies, and associated electronics and electromechanics generate heat and will cease to operate fairly quickly if you don't get the heat OUT of the suit or packaging. This question is strictly about how to get rid of heat while on the surface. I'd like an answer that is at least roughly defensible quantitatively.

As far as I know, no Mars suit has been finalized yet. The Apollo A7L suit is really heavy (91 kg), which was acceptable in the Moon's lower gravity. On Mars it'd get uncomfortable pretty soon, so I suspect we'll see new suit designs for use on Mars.

Mars is a different environment to LEO or the Moon, so the suit needs to be different anyway:

Well, of course we don't know what our engineers will choose but:

Mars has an atmosphere so traditional earth cooling/heating is possible. Think about a fancy heatsink running in your MarsSuit.

Since Steve just contributed an answer to this...well, so will I. There's no need to consume and eject mass for heat control. Mars is cold.

See, for example, this Science article.

Although wind chill on Mars won’t be as tough a problem as previously presumed, heat loss will still be a challenge, Osczevski says. For example, a Mars explorer exposed to 15 km/hr winds in –40°C would lose only 60% as much heat as an Arctic explorer in the same conditions. Only 30% of that overall heat loss would be carried away by Mars’s thin air (a form of convection); most of the remainder would be lost through radiation. Even in an environment with no atmosphere, hot objects radiate energy into cold surroundings, Osczevski says. That relative shift in the mode of heat loss means that engineers will need to design space suits that keep heat from radiating away—possibly by using antireflective coatings.

Still, even space-suited people will lose heat through boots and gloves when they stand in the shade or collect samples from there, Osczevski notes: “Picking up a rock from the shade will be like picking up a lump of dry ice.”

MSL makes approx two kilowatts of thermal power and pumps that around the rover to keep systems warm. The thermal system's cold plates aren't oriented to the sky, and it doesn't consume mass to reject heat.

It seems plausible to me that a CO2 sublimation system is an option. Perhaps instead of water, a pressurized tank of liquid CO2 is expended.

The advantage would be that a station based compressor could replenish the supply of CO2 from the martian atmosphere over time.

Let's take @Uwe's number of 500W from body heat and the functioning of the suit. This needs to be removed from the suit one way or another.

Passive conduction isn't really an option on Mars, the air is too thin.

We could compress Martian air and then blow it through a heat exchanger. Suppose we compress x $kg/s$ to a pressure P $Pa$.

This gives us a hard upper limit for $P$. If $P$ is too big, the term in the brackets on the left will be negative and the equation will have no solution. In other words, we can't compress the gas beyond a certain point, or it will become hotter than the thing we are trying to cool. That point occurs when $P/600$ is about 3, so our limit is about $2000 Pa$ (0.02 atm) and as we approach that, the mass of gas we need per second heads to infinity. So to make this work, we'd need a heat exchanger capable of losing 500W of heat to $CO_2$ at a pressure of 0.02 atm and not very much cooler than the heat exchanger. This seems like a clear non-starter.

Our next option is to radiate the heat. We could imagine a sort of "umbrella" over the suit steered to radiate the heat into the sky away from the Sun. at 310K again, radiation is about $500 W/m^2$, so this is much more promising. Each suit would need a roughly 1 $m^2$ radiator panel pointed at dark sky. Inefficiency would probably push that up a bit, which would start to get cumbersome, but the fact that radiation increases as $T^4$ means that a bit of heat-pumping, so the radiator is at maybe 400K, would allow you to shrink it quite a lot.

Any other solution basically amounts to heating something up (or perhaps putting it through some kind of phase-change) and removing it from the suit, either immediately (as in the original Apollo sublimation coolers) or later (as in the various ice-pack solutions). The problem is to find a system that will store enough energy per kilogram. Vaporising water gets you about about 2MJ/kg. Vaporising CO2 gets you maybe 400 kJ/kg, about the same as melting ice. None of these is especially appealing for working all day on Mars.

UPDATE: "Ice batteries" are already starting to be commercialized, currently as larger scale devices for homes or buildings. With experienced gained here, a miniatureized version may be straightforward to develop. It may not be cost effective for personal use on Earth, but considering the price of "excpendable water" on Mars may be "astronomical" at the beginning, this seems more and more to be the best solution.

Other working materials such as salt water or ethylene glycol mixtures are also being explored.

tl;dr Possibly not, at least not in the beginning. One possible alternative to loosing water via sublimation would be exchangeable ice packs (once per hour or longer) that naturally refreeze on the surface. Later, after recovery of water from geologic sub-surface sources is under way, the loss of a few kilograms per 8 hour spacewalk may be acceptable.

The Apollo astronauts had relatively short missions, and therefore the 10 pounds of "expendable water" to cool their suits by sublimation into space per EVA could be accommodated.

On the ISS, EVA's are rare, since most of the fun stuff is either on the inside, or robotically accessed on the outside.

However a manned mission to Mars is a different matter. Presumably they wouldn't be sent there to just sit inside a "hab" for six months and drive radio controlled robots outside. The term "expendable water" sounds a lot more painful considering it would have to be shipped from Earth, or painstakingly extracted from subsurface soil or possibly the tiny traces in the atmosphere (?).

While the Enthalpy of Sublimation of water is about 51 kJ / mole, the Enthalpy of Fusion (freezing) is almost ten times lower, about 6.0 kJ / mole However on Mars, if you put a bunch of ice packs outside at night, they'll be well frozen in the morning, and also well below 0 °C. If they reach -20 °C by morning, you pick up an extra 1.5 kJ / mole.

7.5 kJ / mole comes to about 1800 BTU of cooling for 10 pounds of captive, recoverable water. So about once an hour, sometimes longer, you just swap out your ice pack for another that's been sitting outside overnight.

These ice packs could have some simple insulation flaps that passively open at night so they can radiate to space, and close when warmed by sunlight, so they can stay cold through the end of the day.

If you run out of ice packs on the surface (or on the outside of your vehicle) in some kind of unusual situation, then you can bite the bullet and puncture it and sublimate the liquid water like they did in the "Apollo days."

These would be high-tech ice packs, able to exchange heat with the suit, and with space, and then to re-insulate themselves during the day, but I can't think of any fundamental reason why this wouldn't work.

Not the answer you're looking for? Browse other questions tagged mars crewed-spaceflight spacesuits water environment or ask your own question.

7
Could moon ice be used to fuel a steam powered jetpack for EVA in space or high altitude exploration on the moon?
9
How have space suits dissipated the heat removed from astronauts?
10
How cold is the Martian sky at night? Or the day for that matter?
6
Apparent temperature Mars
6
Do any spacesuit designs (including prototypes, conceptual, etc) use radiators rather than open-loop cooling?
5
Design considerations for a space suit going to Mars?
2
How much energy would be needed to liquify 1 gram of atmospheric oxygen on Mars?
1
spacesuit airconditioning

10
Will the Mars Transit Vehicle need to include a water recycling system?
3
How rapidly would a manned capsule have to dive to simulate Martian gravity?
4
What are the technologies that can identify, validate, and quantify water-rich locations on Mars?
2
Terraforming Mars - would Mars lose its water?
4
How old are the EVA space suits that are currently used on the ISS?
12
Are there any possible methods for keeping surface water on mars?
7
How were Apollo spacesuits cooled during simulations/rehearsals on Earth?
9
What are beta cloth and beta marquisette, materials used in Apollo-era space suits?
4
Will transit time render Mars disease free?