Why didn't the Apollo 11 lander blow the dust away? (or why does it look like it didn't)

In this picture, we can see the footprints near the Apollo 11 lander. 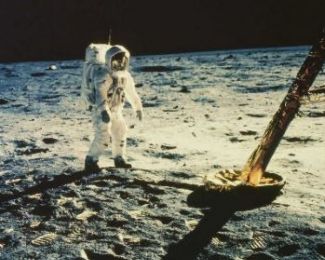 Shouldn't the dust have been blown away when Apollo 11 landed?

Now, the dust would be blown away as mentioned in my last point in the direction the astronaut on the photograph is shown (more or less in the direction towards the hatch where the navigation controls and windows were also installed), but if you look a bit more closer and on a photograph of higher resolution (included below), you'll actually notice the dust trail:

Buzz is standing just beyond the north strut. Note the distinctive dust smudges on Buzz's legs. The photo also shows the furrows in the bulk sample area and the area to the left of the footpad that shows unmistakable signs of sweeping by the descent engine exhaust. In a detail Ulli Lotzmann notes a reflected image of the rendezvous radar.

There is the dust trail visible on the photograph, just look a bit closer. ;)

So, not only that there is no evidence to support conspiracy theories to be found on this photograph, there would be perfectly good reasons why some dust would still remain on the surface of the landing site, even if there was no sign of the dust trail. There is, it just so happens that Buzz Aldrin is walking back to LM where it isn't the most pronounced.

There is, however, an alien on this photograph:

Neither Neil Armstrong, nor Buzz Aldrin were born on the Moon :P

In this video of the Apollo 11 landing, you can see dust being blown away during the approach (from ca. 4:30). Some of the particles were blasted clear over the horizon and may have ended up halfway across the moon.
The 'ground' below the dust isn't smooth. Like new basalt, it has a grainy texture, as you can see here directly below the exhaust: 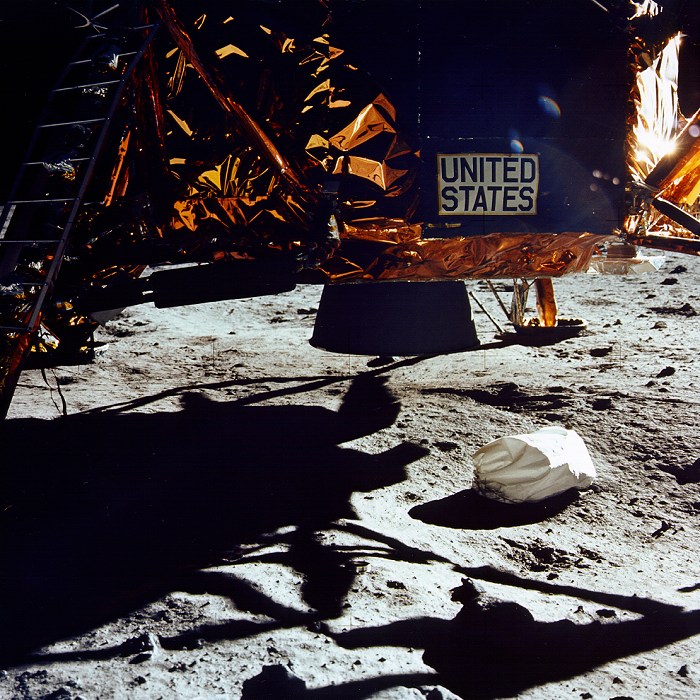 The moon has no atmosphere, so only the dust directly in the path of the rocket exhaust will be disturbed. This is unlike Earth, where the exhaust would drag along the surrounding air, creating a much larger area of influence. So anyplace that's even a bit shielded from the exhaust would remain undisturbed. In the photo posted by @Tildalwave, you can see how uneven the ground was. In this photo, you can see that areas where the dust is intact are shielded, and other areas appear smoother:

Robert Braeunig did a detailed analysis of lunar soil erosion by the LEM engine. His conclusion:

Of all our assumptions, perhaps the one that most dramatically affects the results is the final velocity of the gas and soil. For instance, if we used the middle of the velocity range, i.e. 1,700 m/s, rather than 1,000 m/s, we get a maximum crater depth of just 10.6 mm (0.42 inch). In reality, the exhaust stream blew away very little soil because there wasn't enough energy in the gas to move a large volume of surface material.

The dust that did get blown away had a remarkable effect:

In November 1969, the Apollo 12 Lunar Module (LM, pronounced "lem") landed about 200 meters from Surveyor 3, a robotic probe that had landed on the Moon in April 1967. The Apollo 12 astronauts walked over to Surveyor 3 to photograph it and to retrieve some pieces for return to Earth. Right away, they noticed that most of Surveyor 3, which at launch was pristine white, had darkened to brown--a result of two-and-a-half years' exposure to extreme lunar conditions.

But the side of Surveyor 3 facing the LM had been sandblasted back to white. In fact, "every bolt, cable, or bracket blocking the spray of fine grit from Apollo 12 left permanent shadows etched onto Surveyor," Metzger says. From examining the returned artifacts, scientists later calculated the sandblasting resulted primarily from finest dust particles only 1 to 10 micrometers (0.00004 to 0.0004 inch) across.

This image shows a difference in color between the two sides of the camera (the camera was retrieved by Apollo 12): 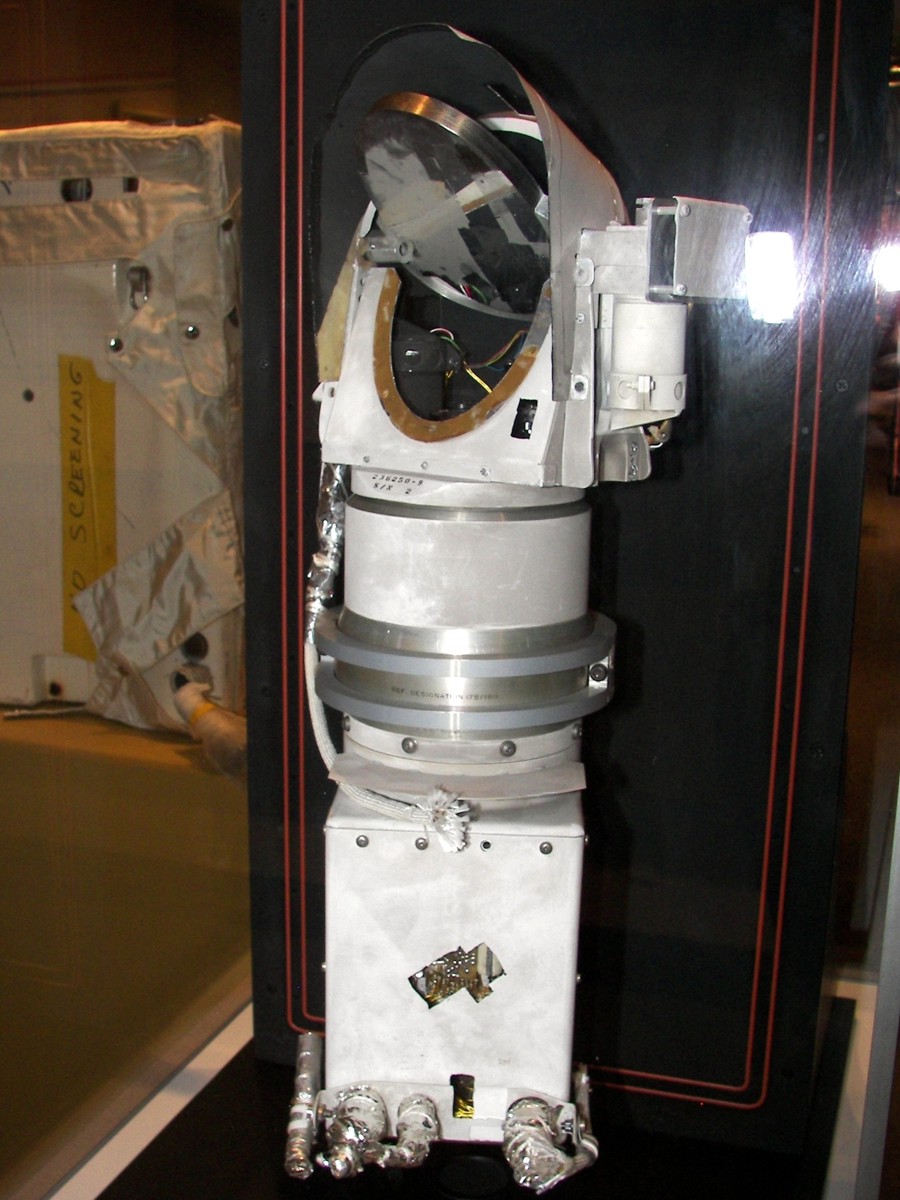 Problem with this image is, in every Surveyor 3 photo I could find, the darker side of the camera was turned towards the LEM: 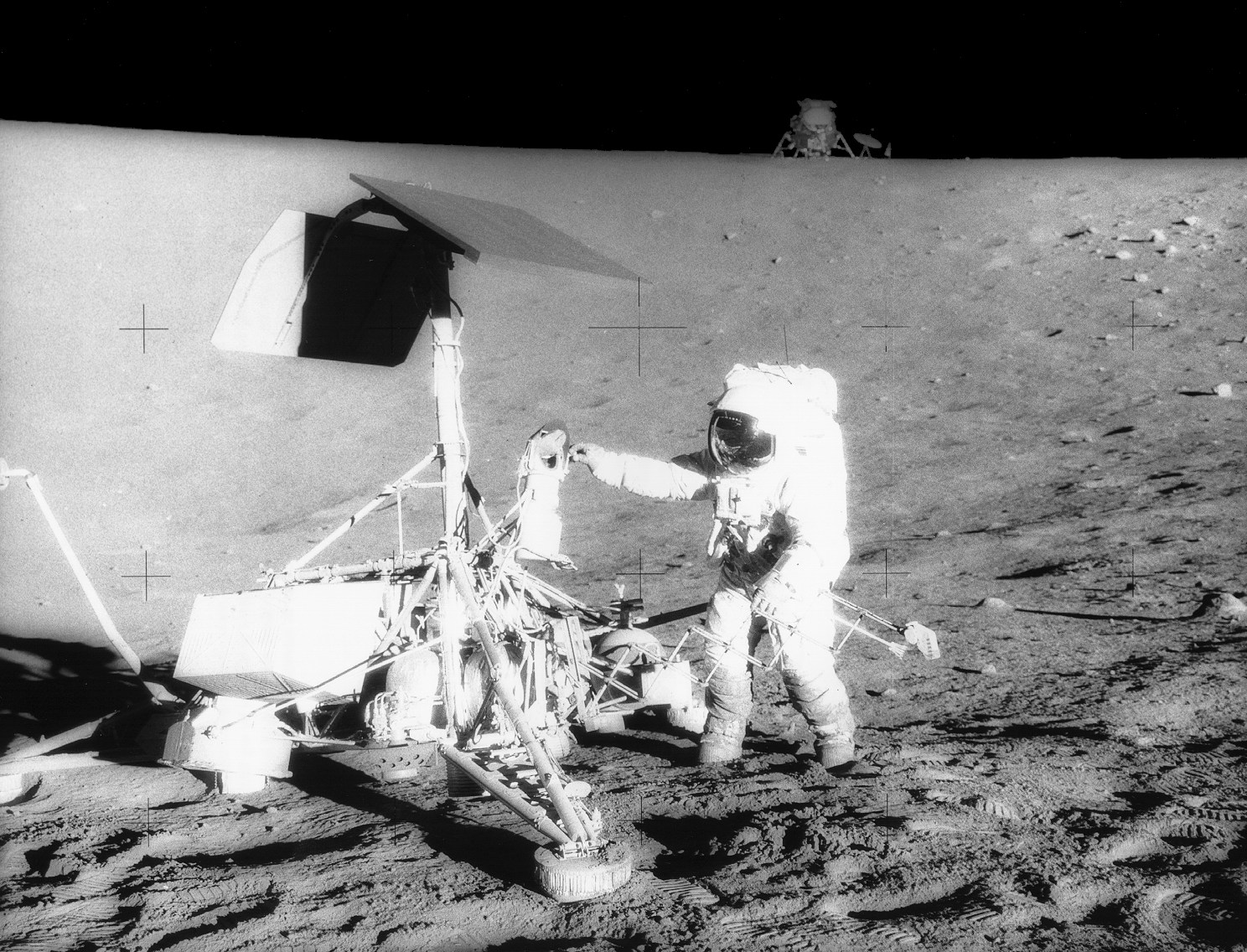 Now, it seems the Apollo 12 crew took only a few photos of Surveyor, it's possible they turned the camera (preparing to remove it from the probe) before they took the photo. Photos taken on the Moon don't show the color difference very well, any subtle gradients are washed out by the harsh light.

It was well publicised on radio, television, newspapers and manybooks on the subject in 1969 when I, as a young adult and along with most of the Western World, took in every bit of information about the Apollo 11 mission. That is one of my references: I was alive and heard it all happen.

In the last minute or so before the landing, Buzz Aldrin was heard to say, "Picking up some dust" (accent mine). This comment about "some" dust contrasts with Apollo 16 Charlie Duke's comment about the large amounts of dust his mission kicked up close to their landing, and why that should be so (this ref. below).

After the Apollo 11 LM was on the moon and the astronauts outside the spacecraft, they reported to NASA a small scar in the lunar surface quite some distance from the LM. Given that they and the LM were the only "entities" that could have put the scar there, the told NASA about it and reasoned that the significant sideways motion of the LM at landing meant that the 5 foot probe attached to a leg of the LM touched the surface and left the scar. NASA concurred (I was hearing this live, BTW) And this fact is also relevant to the question: The scar was absolute proof that when the LM was 5 feet above the surface, it had quite horizontal distance to go before it touched down. And the significance of that is, the purpose of the long probe was so that an accurate point close to the surface would be indicated and that was the point when mission rules demanded that the descent motor be turned off.

Newtons Laws of Motion and lunar gravity then coasted the LM sideways into the landing. This explains why there wasn't much dust over the landing pads (such dust as had been kicked up got "left behind", falling vertically in a vacuum), and it also explains why there wasn't a deep blast hole under the descent engine exhaust (it wasn't firing then, by mission rules). And this provides the real reason why the LM didn't "blow the dust away" - it can't if it isn't firing where and when the LM is on the surface.

Apollo 16 by contrast did kick up thick dust that visibility became difficult in the final landing phase (Duke, 1990, pp. 161-162). Apollo 16 was landing vertically in its final phase (ibid.) so of course it was landing right into the dust it was kicking up.

Incidentally, and obtusely related to the dust question, Charlie Duke's stated reason why the descent engine was turned off before landing (ibid.) was that if it was going and if the engine landed right where a rock was which blocked the engine, it could blow up.

Off the top of my head I think the reasons are

Perhaps someone with more direct knowledge can add more details, but I think these are the basic reasons.

We are used to see the dust 'floating away', but that's due to the presence of an atmosphere. In a vacuum, the dust particles fall to the ground inmmediatly, even with the relatively low gravitational acceleration of the Moon...

Not the answer you're looking for? Browse other questions tagged the-moon apollo-program lunar-landing myth-busting dust or ask your own question.

60
Which Apollo “mystery” was said to be finally solved by a better rendering engine?
16
Are there photos of the Apollo LM showing disturbed lunar soil resulting from descent engine exhaust?
26
How was dust-mitigation addressed during the Apollo program?

26
How was dust-mitigation addressed during the Apollo program?
21
Why didn't the Apollo program do an uncrewed landing/ascent rehearsal?
37
Why does the ascent stage of Apollo 11's lunar module look like it's made of paper?
3
How did they sweep dust on the moon from inside the Apollo Lunar Lander?
6
Why did the Apollo program become a MULTIPLE human landing program?
24
How exactly did the floor of an Apollo LM look like after EVA(s)? Seeking photo!
20
Why didn't NASA launch communications relay satellites for the Apollo missions?
7
How were the “dust recepticles” installed on the Apollo 17 LM floor?
4
Single Engine versus Multiple Engines for Moon Landing