How does an Electric Solid Propellant rocket work?

I saw the section in Wikipedia about Electric Solid propellants but I can't figure out what it really is, and how it works. It sounds like a solid propellant rocket that you can start and stop multiple times by turning it ON and OFF - a restartable solid fuel rocket.

Are there any examples of this type of rocket being put to use? (beyond self-validation)

First, the concept isn't new; it's an incremental research on Pulsed Plasma Thrusters which were used first on soviet Zond 2 and Zond 3, starting in 1964. In Pulsed Plasma Thrusters, all the combustion energy comes from electric discharge, which evaporates a small portion of inert (non-combustible) solid propellant (usually teflon), the process producing a "puff" of charged plasma (moving at relatively low speed), which is subsequently propelled through ion engine principles.

The Electric Solid Propellant (ESP) does away with the ion engine part, but instead uses an almost combustible (just barely self-extinguishing) propellant which evaporates rapidly enough to produce a reasonable exhaust velocity. It also replaces moving propellant stick and the fixed "spark plug" electrode with a non-movable structure of electrodes, conductive (but resistive enough to create plasma) propellant and ablating insulator, ablation of which (during combustion of the propellant) exposes more of the electrode, allowing the electric pulse to travel with the front of the propellant. 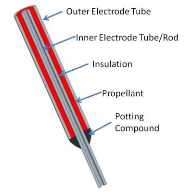 There is a number of different ESPs, varying in properties

Specific impulse in all these is on par, or somewhat below that found in classic SRBs - of order of 200-230s. The primary differences are in smoke signature, environmental vulnerability and ignitability characteristics.

Thanks to the plastisol process, they can be prepared with standard lab equipment and just "cast" like resins and the likes - simply poured into the prepared thruster, in room temperature. "Curing" occurs in temperatures of order of 35C over 7 days. This way, for example, microthruster modules are prepared. Such modules can be installed directly in nanosatellites.

The microthrusters like pictured above can fire for 1.5s, providing 5-10 millinewtons of thrust (x6 in the sextuple modules). The microthrusters can be activated in very short pulses - of order of 0.02s or less, to provide a fine regulation of impulse.

Of course the propellant can also be used in larger assemblies. 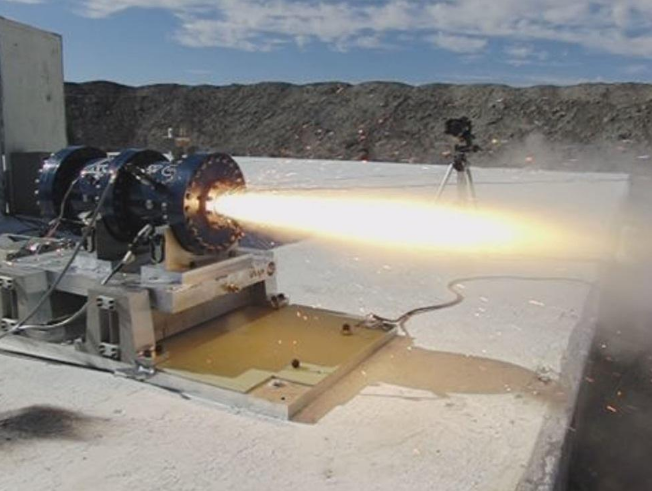 Currently, a test article microsatellite "SpinSat" utilizing the microthrusters was launched from ISS on 28th November 2014. The results have not been published yet.

Not the answer you're looking for? Browse other questions tagged fuel solid-fuel restartable-engine or ask your own question.

7
What kind of engine does this Isp = 1600 refer to? Is it cubesat-friendly?
11
What ever happened to SpinSat - did it work?
1
Are there any new breakthrough propulsion systems for nanosatellites?