When you look at space ships, capsules and stations, one thing that is lacking in space isâ€¦ space. As in: pressurized volume a human can freely move in. Most are tiny tin cans.

So I was wondering, what is or was the largest single pressurized volume ("room") in space? By this I mean the undivided volume an astronaut/cosmonaut could move around in freely.

So far, I have found these candidates via Wikipedia, but the data seems incomplete/imprecise sometimes.

So what was the volume an astronaut was able to move around in freely on Skylab? Was it the largest volume, is KibĹŤ's volume actually large or did I miss a station/vehicle?

(Sidenote: I was thinking about the Space Shuttle at first, but while its cargo bay had a volume of about 260Â mÂł, it wasn't pressurized.)

So far (2016) the biggest "room" in orbit was the Orbital Workshop of Skylab.

Here's a video showing astronauts moving in the largest part of Skylab. You never get to see the "floor" in this one, unfortunately. The room was so big that they were even able to test an astronaut maneuvering unit (jetpack) inside (see pictures at the end of this answer).

I found numbers for the Orbital Workshop volume ranging from about 270 mÂł (9,550 cubic feet) to about 302 mÂł (10,664 cubic feet) (total habital volume of the station is usually cited as 351â€“361 mÂł). That seems to include the crew quarters section. When looking at the cutaway diagram I estimate that the crew quarters sections (divided from the rest of the lab by a wire mesh grid) took up about a fourth of that volume, leaving the main "room" with about 202â€“226 mÂł.

The largest module (on the inside) of the ISS is the KibĹŤ module with a pressurized volume of 155 mÂł. So Sklyab beats that.

Skylabs large volume actually caused problems: apart from the obvious "getting stuck" issue (Skylab crews learned that you can indeed "swim" in the station) it seemed that the large volume contributed to Space Adaptation Syndrome (citation needed; I read about it recently but can't find a good source now).

Images from the actual Skylab: 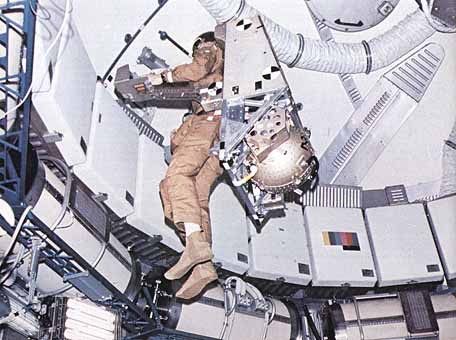 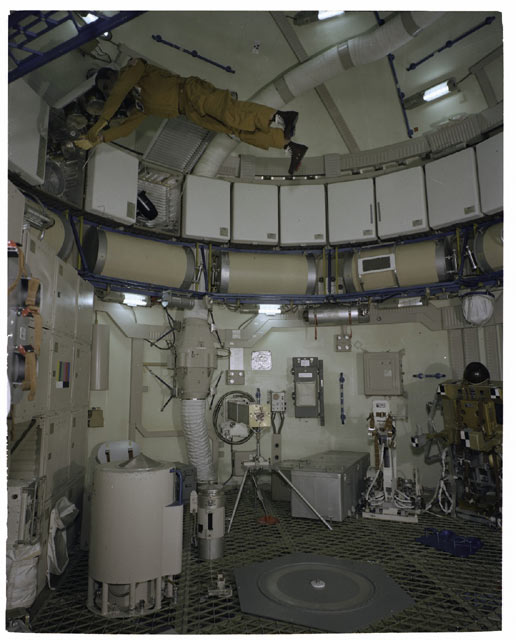 Not the answer you're looking for? Browse other questions tagged spacecraft history space-station life or ask your own question.

21
How best to maneuver inside a large room within a space station using only arm and leg motion?
25
Which space vehicle had the most interior, pressurized cabin space?
14
Is there an upper limit for the internal size of space stations?
15
Can you swim in space?

14
Is there an upper limit for the internal size of space stations?
10
Did Skylab have a fixed orientation?
9
Why have space stations become less volume-efficient despite technological progression?
9
Why is tethered artificial gravity hardly ever considered?
9
Building space stations with the original, smaller shuttle
35
What led NASA et al. to decide the ISS should be a zero-g station when the massive negative health and quality of life impacts of zero-g were known?
1
Did Skylab have several giant spirit levels? That's what these look like to me, except there's no bubble
9
Why was Redstone Arsenal specifically chosen for post-war rocket development?
4
What are the longest current rocket payload fairings, capable of carrying long space station sections?
2
What is the origin of the Lunar Module in the US Space and Rocket Center in Huntsville, AL?