What is the convention for "launch date" when dockings and transfers are considered?

I was confused by the displayed launch date for SpinSat which was carried into space aboard CRS-4 in September 2014, since it is listed as November 20, 1998. It was explained that the date refers to the launch date of Zarya - the first module of the ISS, since SpinSat was deployed into space from the ISS (via the Kibo module airlock.)

Is the system for applying launch dates to objects involved in docking maneuvers, transfers, or even captures and re-deploys described somewhere? In the future those could become more common.

If I could have followed CRS-4 and SpinSat for the past few years, would their displayed launch dates change as their situation changed?

Screenshots shown below are from http://www.n2yo.com/ circa July 2016: 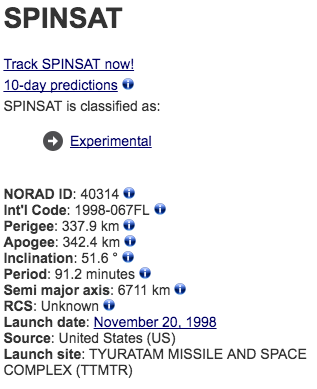 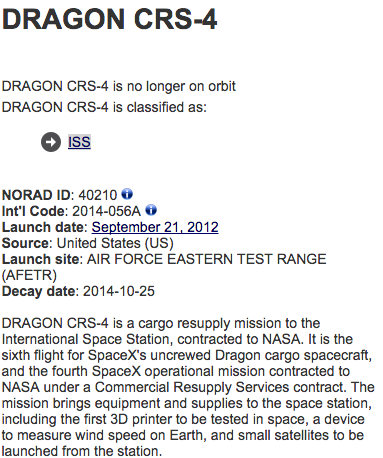 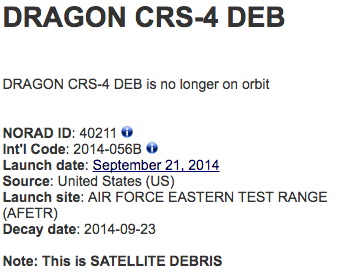 Because launch date drives the international designators - All ISS deployments are 1998-067## (only at two letters for now). For Iridium they are 1997-051### (the highest it goes is 1997-051ABD). I've verified this on space-track.org which is the web site fed directly from the JSPOC. Celestrak gets its data from space-track.

Since both space-track and Celestrak capture "launch date" based on the deployer date, rather than the object actually going into space, it becomes hard to find out when something actually launched.

A great resource is Jonathan's space report, which keeps track of actual launch dates, as well as catalog and international IDs. His launchlog file is an unwidely text file, but you can do lots of magic with it in Excel, Matlab, Python or yourfavorite processing code.

Not the answer you're looking for? Browse other questions tagged artificial-satellite docking or ask your own question.

9
Why is the Pirs docking module being discarded?
2
What are the tradeoffs of docking multiple small launches in orbit vs a single heavy launch?
11
What are the numbers on the Soyuz docking cam?
19
What is the "ISS's Keep Out Sphere" and what is its radius?
6
How many antennas does Kurs use in toto, and what are each of their functions?
39
Is it possible to observe space debris with Binoculars?
51
In what state are satellites left in when they are left in a graveyard orbit?
4
What is the reason for secondary oscillations in apogee and perigee plots for objects 41332 and 41333?
11
How are Kounotori modules unbolted? Who or what does the unbolting?