Is it possible to be totally stationary in space?

In lots of science fiction movies, spaceships are shown stationary, but don't they have to be in an orbit? Is it possible to not be moving and not orbiting anything, or is this totally impossible?

It all depends on your frame of reference.

For "stationary in space", I'm going to assume you mean something like The Fleet from Battlestar Galactica hanging out in the middle of nowhere; like so: 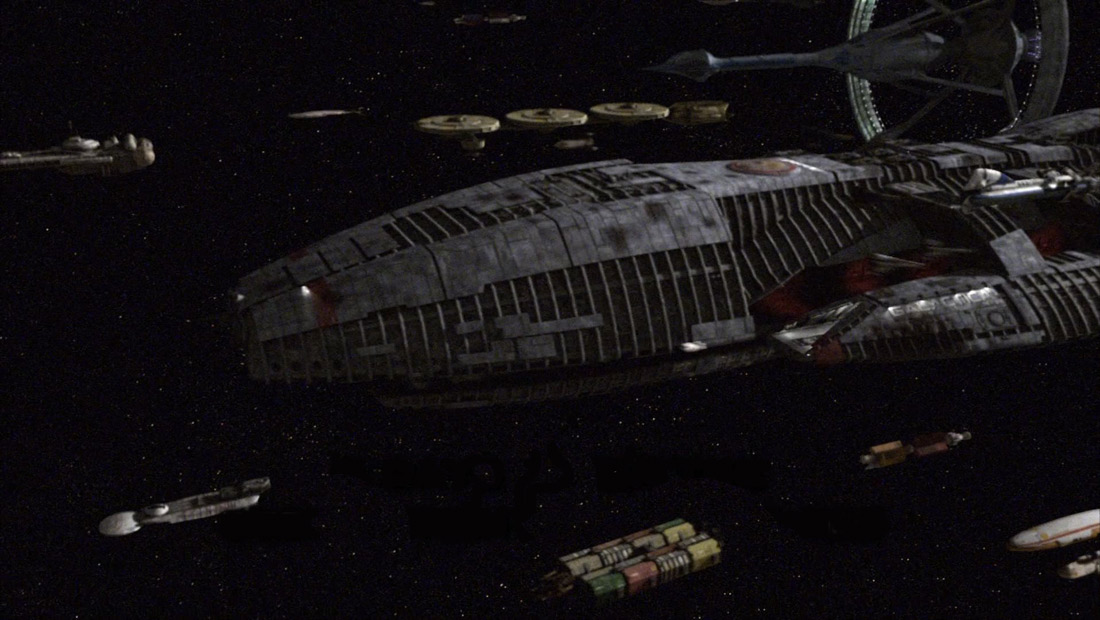 This isn't necessarily a terribly bad depiction. While The Fleet is moving relative to galactic centre, they aren't so much moving amongst themselves, except for minor jiggles that their reaction control systems are more than capable of making up for, and given their hundred-million-year orbit, the stars would appear, just, completely stationary (in the time frames portrayed in the show).

Even when you have Sci-Fi vessels in orbit around planets, these orbits tend to be rather lofty; consider for instance Prometheus orbiting Earth: 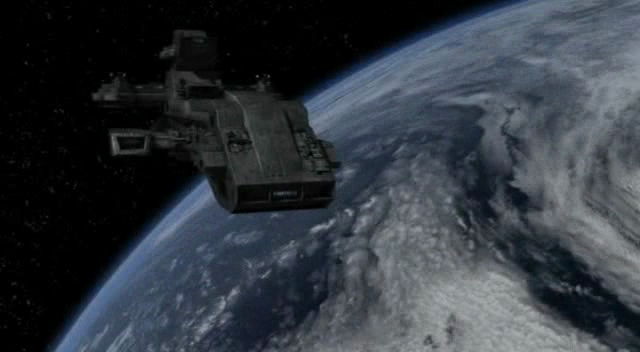 I'm not expert when it comes to estimating these things, but I'd put the vessel at about 350~450 km; maybe more. At that altitude, they'd be orbiting once every 90 minutes, which isn't a long time, but over the course of a vignette lasting a few seconds, the Earth could very reasonably appear stationary with relation to the spacecraft.

This is not to mention that the features of the Earth are pretty indistinct at any altitude, and frame dragging alone means that portraying an Earth seen out a window (windows being a whole other kettle of fish, of course…) as pretty much stationary isn't such a stretch either.

I'm sure there are examples out there of Sci-Fi shows where neither of these considerations apply, and you're left with just … pants on head type stuff, but due to short time frames, the depiction of space ships as stationary can absolutely make sense … in context.

It all depends on how far out you want to look.

For example, you could in theory have a velocity of zero relative to the Earth, and continuously fire your engines to counteract its gravitational pull. Then you would be stationary above Earth... but you'd still be orbiting the sun along with Earth.

You could do the same thing with the Sun, but the Sun is rotating around the center of the galaxy.

So in short, you are always in an orbit around something, but if you set your frame of reference small enough, sure you can be stationary above a planet or other body. It would just take killing off any orbital velocity, and then continuously firing your engines to counteract gravity.

No. Nothing is actually stationary and everything is in motion. You can appear stationary but that is an optical illusion. Ships and fleets in sci-fi shows look still but in reality they would most certainly be in some kind of motion. You slow down too much in space and you begin to speed up to the largest closest gravity well near by.

Yes, I believe it is.

A mass is stationary in space if its momentum is equal in all directions.

It is unlikely we will ever observe a stationary mass, because there are so many different components of motion, ranging from Earth's rotation to the movement of galaxy clusters.

I will try to make this clearer.

Consider any axis through the centre of a spherical mass.

There must be some speed in between these extremities at which the momentum is balanced. That speed is highly unlikely to be what we happen to measure as zero speed, since that is relative to some arbitrary reference. It is the absolute zero speed on that axis.

If the speed of the mass is absolute zero on any chosen axis then the mass can be considered to be stationary in space in absolute terms.

Not the answer you're looking for? Browse other questions tagged orbital-mechanics orbit or ask your own question.

19
How deep is the force well of L4 and L5 Lagrangian Points of Earth-Sun set?
10
Is a lunar Sun-synchronous orbit possible at the "frozen" inclination of 86°?
6
What is the largest body in the solar system we could meaningfully and accurately adjust the orbit of?
36
The Loose Astronaut
2
Stationary Inter-planetary Satellite?
6
Would any manned orbital launches to date have been possible (but lower) if they were launched retrograde instead of prograde?
13
A spacecraft is travelling at X units per hour. But relative to what exactly? Does it depend on orbit? How?
6
Do "partial" Hohmann transfers exist?
0
How does the orbit of the Voyager and New Horizons probes manage to get into interstellar space?
1
Does the Earth's orbiting the Sun influence spacecraft in Earth's orbit?