Is it possible to leave the Solar System by repeatedly using gravity assists from the Earth?

If a spacecraft was accelerated to just above Earth's escape velocity, it would begin orbiting the sun with an orbit very similar to Earth's. Could the spacecraft then repeatedly perform a gravity assist with the Earth to increase it's apogee over and over until it left the Solar System, while only using a nominal amount of delta-v to perform deep-space maneuvers to fine-tune encounters with the Earth?

Juno did something similar to this, it went on an initial 2 year orbit, with a flyby of Earth 2 years after launch, after which time it went on to Jupiter, to orbit it.

I've been playing a bit with NASA's Trajectory Browser, and found this possibility: 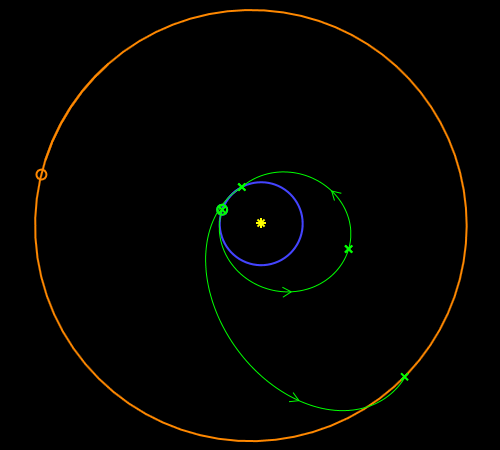 If you want to do a purely Earth based escape, it is also possible, the trick is to periodically return to Earth. So the first return time would be in 2 years, the next might be in 4, and so on until you have left the Solar System. It might take a while, but it could be done.

Not the answer you're looking for? Browse other questions tagged orbital-mechanics gravity-assist or ask your own question.

6
What is the maximum number of gravity assists that a spacecraft can use in our Solar System?
49
Why did Voyager 2 receive a gravitational slowdown (as opposed to a slingshot) at Neptune?
3
Why can't cubesats get gravity assists from space junk in Low Earth Orbit?
9
What is the effect of gravity slingshots around Earth on Earth's rotation and orbit time, and is this effect worth considering?
6
Multiple Gravity Assist from Moon to reach Mars
6
Can we speed up spacecraft to suitable interstellar travel speed using oscillating gravity assists on planets on opposite sides of the solar system?
1
Mangalyaan + Trident; is it possible? escape the solar system using a low cost booster
7
How exactly did Jupiter change Ulysses orbital plane from nearly ecliptic to polar?
3
Calculating the delta V budget from Earth to Mercury