Why the first two passes are on the same side (in this view) but the rest alternate? edit: This is because the first orbit has a very different period.

What kind of orbits are not considered "Gravity orbits"?

What is an MWR orbit?

What kind of orbits are in white (not labeled in the legend)?

It looks like the dark side of Jupiter is mostly facing us - the sunlit face is mostly facing away from us. You can see a crescent of light on the right side at the beginning, then on the left side later on. I thought Juno will never experience an eclipse during its time studying Jupiter.

I think I see an "Extra science orbit" in yellow at 00:55, but no De-orbit maneuver in red. I was looking forward to the Juno-shattering Kaboom! See question 1, and question2, and Marvin the Martian circa 1950 for background. 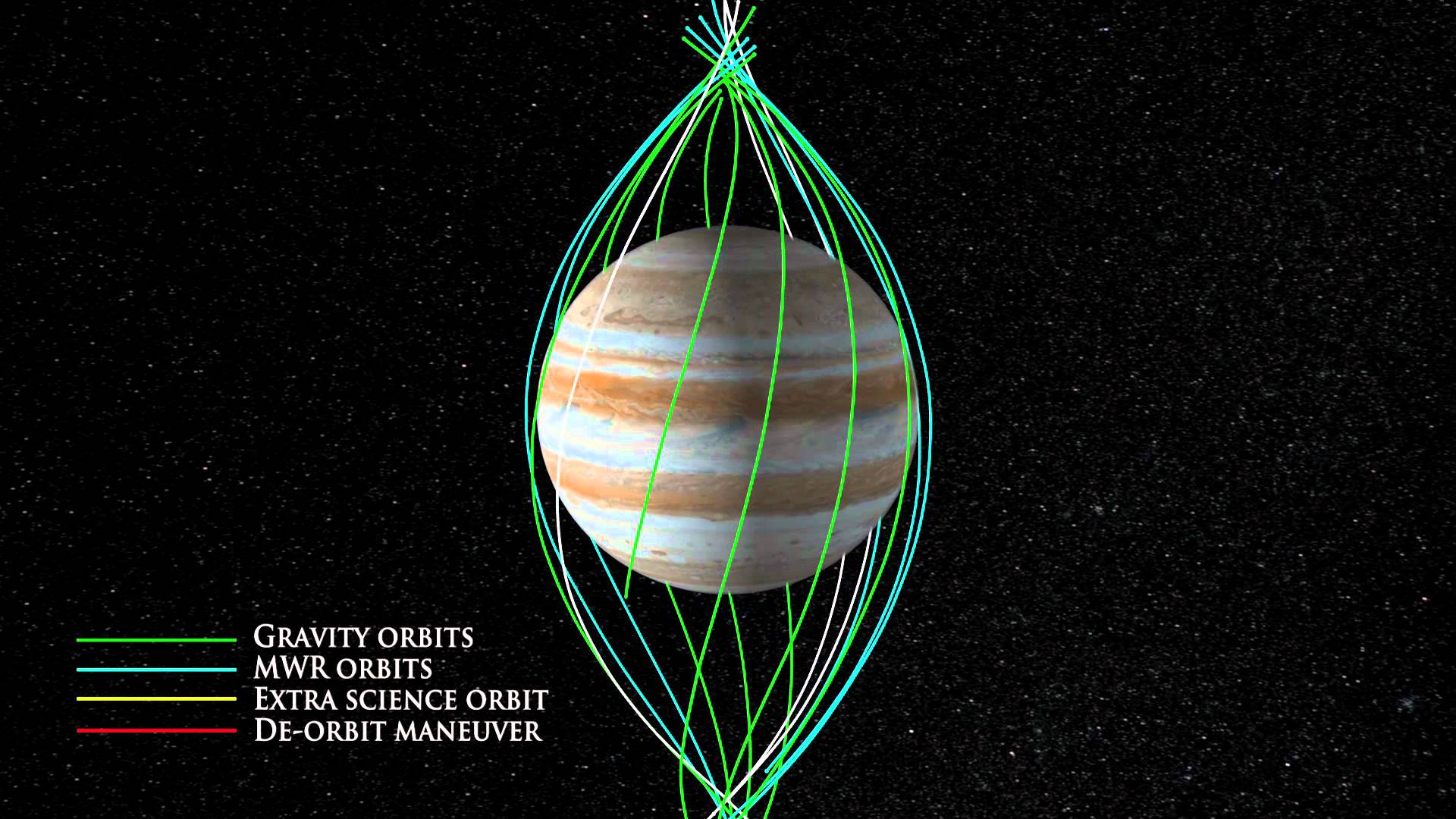 Jupiter rotates quite rapidly -- it's rotational period is only ten hours. The camera on that animation is almost keeping up with Jupiter's rotation. The rotation of Jupiter beneath Juno's orbital track is where the apparent twist is coming from -- the path is being rendered Jupiter-surface relative. Note that the very eccentric orbit means that Juno's speed is changing dramatically over the course of each pass -- accelerating toward perijove (near the equator) and decelerating on the way out; it's close to the planet for only a few hours out of each two-week-long orbit.

MWR is Juno's Microwave Radiometer. I believe the "MWR orbit" versus "gravity orbit" distinction simply tells which instruments are going to be active on each pass -- the MWR versus the gravity experiment -- which has secondary impact on other aspects like the spacecraft's communication protocols. There's more information on those orbits near the end of this very informative page. Here's information from Wikipedia about the instruments.

Like much of the stuff coming out of JPL and SWRI regarding Juno, this leaves me unimpressed. The animation has labels that are unexplained, a slowly rotating Jupiter that is unexplained, big jumps in time whose presence was not divulged, and an obviously nonsense star field that I suspect was added just for the "Wow!" effect.

It is a clue that this is not a good video. It would have been better to have left the background black.

Here's my best guess with regard to how what you are seeing was created:

Regarding the coloring and labels on the orbits, Two of the nine experiments being conducted by Juno are mutually incompatible with one another. These two experiments turn out to be two of Juno's primary reasons for being, which are peering into Jupiter's atmosphere and assessing its gravitational field.

Juno doesn't have any sensors to measure gravity (sensing gravity is very, very hard). Instead, variations in Doppler shift in the science data return from Juno as received on Earth give clues to Jupiter's gravity field. This means using the high gain antenna, which in turn means that Juno needs to orient itself so the high gain antenna points at Earth. (The high gain antenna is not pointable except by pointing Juno as a whole.)

The microwave radiometer (MWR), which is used to peer into Jupiter's atmosphere, has conflicting requirements on Juno's pointing. The radiometer needs to be pointed toward Jupiter and the spacecraft needs to be oriented so as to minimize multipath interference. (If you have a smartphone with a GPS receiver, you may have noticed that it doesn't work so well in downtown areas with tall skyscrapers. That's because of extreme multipath interference.) Pointing the HGA toward Earth is a non-option when the MWR is is use.

89
Why destroy Juno at the end of the mission?
54
Why wasn't an RTG used on the Juno spacecraft?
18
Is this what station keeping maneuvers look like, or just glitches in data? (SOHO via Horizons)
6
Who built Juno's chipsets?
3
When Juno finally de-orbits into Jupiter, will metal sink to the core, or remain in the atmosphere?

18
Why does NASA's Juno spacecraft only have a one year primary mission?
10
How was Juno's arrival set up to be on the evening of July 4th?
8
How is gravitational time dilation experienced by spacecraft near Jupiter such as Juno
20
How long does it take for a signal to travel between Earth, and Juno at Jupiter?
6
The plane of the orbit of Juno around Jupiter is not the ecliptic plane. How did it get into this plane?
5
Juno's original orbit around Jupiter - is this apsidal precession? If so, need expression
8
How did Voyager 1 avoid crashing into Jupiter?
10
What exactly is the interaction that blocked Juno's data downlink near solar conjunction?
33
Why does this image of Jupiter look so strange?
12
What are these features on this moon of Jupiter?