The plane of the orbit of Juno around Jupiter is not the ecliptic plane. How did it get into this plane?

Did Juno start off its course on the ecliptic plane from the earth orbit and then left it at insertion to Jupiter's orbit over its north pole or it was always in that plane?

On approach to a body, your target can be anywhere in a plane perpendicular to your approach trajectory, at essentially zero cost. That plane is called the B-plane: 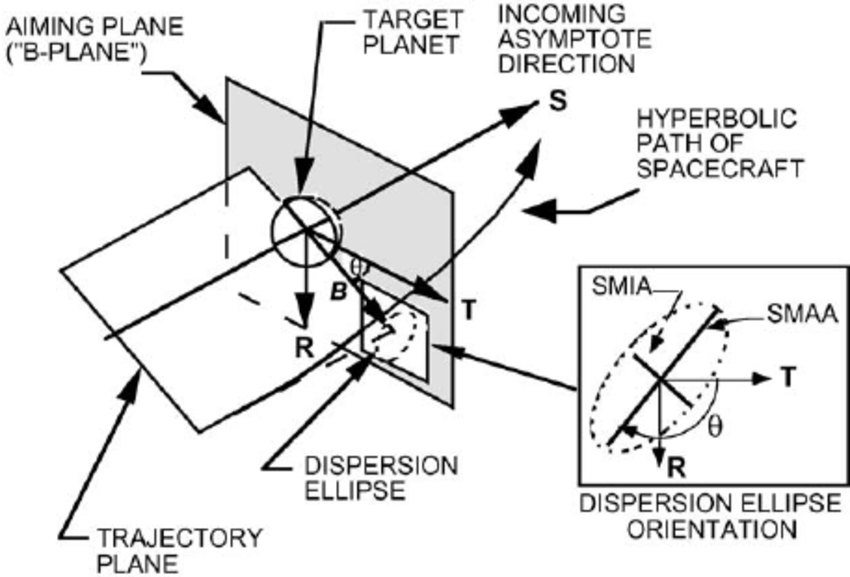 For convenience, you target a point on the B-plane that you would intersect if the planet were not there, or if it had no gravity. You actually cross the B-plane inside of that point due to the planet's gravity. You get to pick how far from the center of the planet your target point is, and the angle of that point anywhere around the planet. The distance from the center determines your closest approach distance, or your atmospheric entry flight path angle. The angle determines the plane of your planet-relative approach trajectory, which will be the plane of your orbit.

Juno's approach declination was about 8°. Then by choosing how you target the Jupiter closest approach, which can be anywhere in a circle around Jupiter, you can pick any final orbit inclination from 8° (prograde) to 90° (polar) to 172° (retrograde).

After orbit insertion, you can do maneuvers or swingbys of satellites to change the orbit plane, e.g. if you wanted to be more equatorial than the approach geometry permitted. Cassini is the champion of this, having dramatically changed its orbit plane many times over the course of its mission at Saturn, using Titan gravity assists.

Basically, Juno came in towards Jupiter from slightly below it. This allowed it to slow down into an orbit which takes it around the poles of the planet. Over the course of its journey to Jupiter, it was at a very slight angle, relative to the plane of Jupiter's orbit. This angle was determined by the flight engineers at its launch, and refined by two deep space maneuvers and an Earth gravitational assist flyby. This slight angle was enough to put the craft below Jupiter, because its journey was very long. More information about Juno's trajectory can be found in Spaceflight101's article, which includes a Juno trajectory animation.

As noted in comments, by selecting the launch time and initial trajectory, any relative inclination between Jupiter and the spacecraft could be achieved.

That said, while plane changes measured in degrees are indeed expensive, for an orbit that goes out to 5 AU, one degree of relative inclination corresponds to a deflection of something like 12 million km.

If, after Earth flyby, mission control had realized that Juno was on a direct collision course with Jupiter, they could have done a 1-meter-per-second correction "northward"; Juno would then pass over Jupiter's North Pole at a distance of about 60,000km. In the solar frame of reference it's still a low inclination orbit; in Jupiter's reference it's polar.

I estimate the launch time and coordinates must have been optimally designed so that the gravity assist would already position Juno in an inclined plane much more than what was needed ultimately but adjusted over the long trajectory by the pull of Jupiter into correct entry point.

NASA would have two tools to angle the shot: earth's orbit and its axial rotation.

I'd assume they designed the trajectory purposely not in the plane of solar system at all but in an inclined plane winding up and down the apogee of its orbit as needed riding the great roller coaster. Hats off to Isaac Newton.
quote from Wikipedia page on Ulysses probe

to change the orbital inclination of a spacecraft a large change in heliocentric velocity is needed. However the necessary amount of velocity change to achieve a high inclination orbit of about 80° far exceeded the capabilities of any launch vehicle.
https://en.wikipedia.org/wiki/Ulysses_%28spacecraft%29.

Not the answer you're looking for? Browse other questions tagged orbital-mechanics spacecraft jupiter juno or ask your own question.

5
Juno's original orbit around Jupiter - is this apsidal precession? If so, need expression
4
How are B-Plane parameters actually determined for a planetary flyby?
2
Gravitational keyhole for spacecraft flyby?

14
How will Juno establish existence of solid core within Jupiter and determine its size?
7
Why does the Juno spacecraft flyby Earth on the way to Jupiter?
4
Will there be joint observations from earth and the Juno spacecraft when it reaches Jupiter?
8
How is gravitational time dilation experienced by spacecraft near Jupiter such as Juno
5
Juno's original orbit around Jupiter - is this apsidal precession? If so, need expression
4
If Juno's long orbit means a lower rate of radiation damage, why the planned short orbit?
4
Did Juno do a plane change circa October 2019? If so, by how much?
7
How exactly did Jupiter change Ulysses orbital plane from nearly ecliptic to polar?
8
Did the spacecrafts Galileo or Juno use the Galilean moons for a gravity assist before entering Jovian orbit?