How did Apollo 16 capture this full photograph of the Moon's far side?

Apollo 16 famously photographed the far side of the Moon, as seen below. 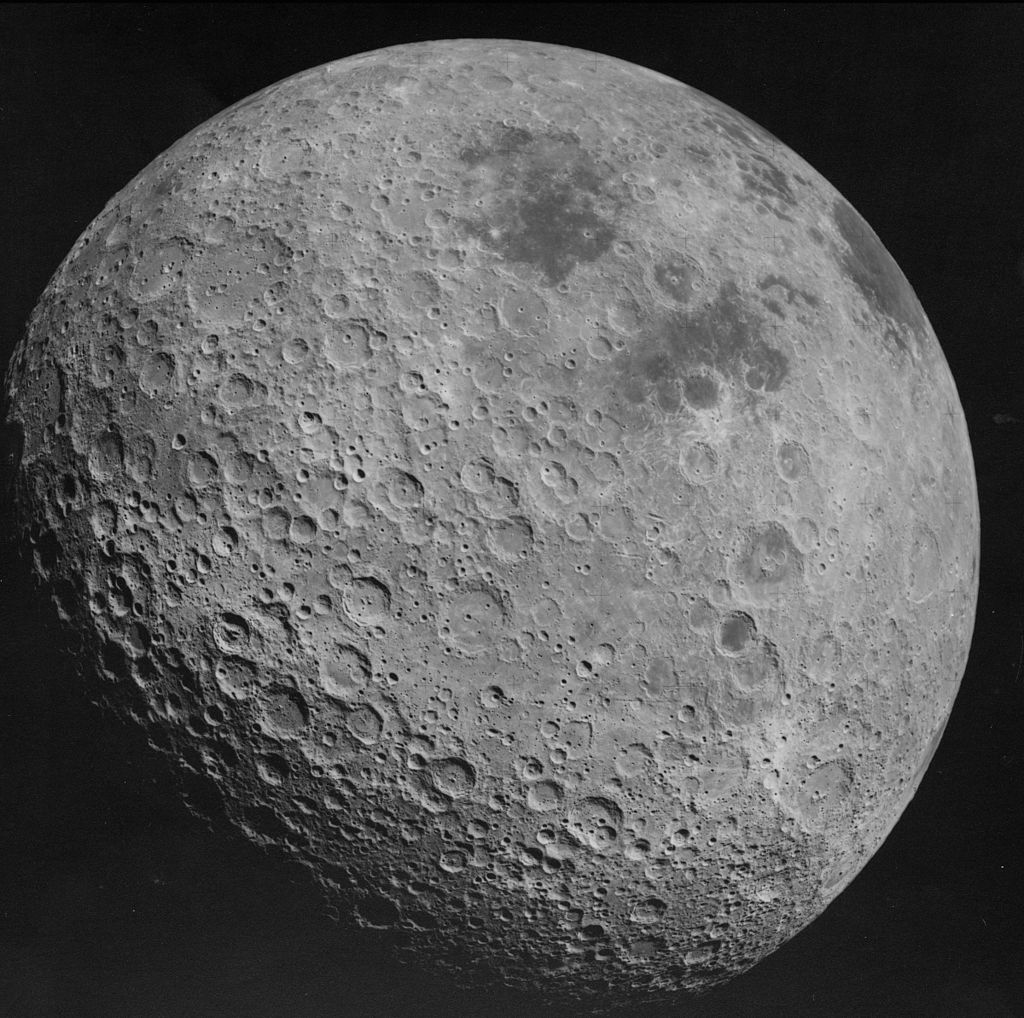 This seems odd to me. Apollo 16 orbited the Moon at an orbit of only 100 km. It seems too close to get this kind of a photograph of the Moon. How was this picture captured with a global view of the Far Side, from Apollo 16?

The photo (frame 3021) appears to have been taken from an approximate altitude of 1180 KM, on the return journey to Earth.

We infer it was taken on the return journey as frame 3005 was taken after trans-Earth injection. And, presumably, by "Revolution: TE" in the image's information.

The image information tells us the photo was taken by the Metric/Mapping Camera. NASA provides details of the The Fairchild Lunar Mapping Camera:

Knowing the camera's angle of view and the radius of the moon, we can calculate the minimum altitude required to see a full disc (a 360° horizon) using the law of sines. The line from our camera to the horizon is a tangent, which gives our second angle, a right-angle. 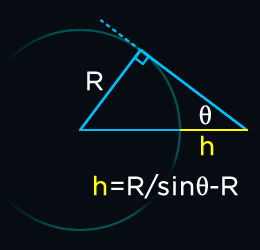 Knowing the minimum altitude required, and assuming the image shows the entire photo, we can recreate the camera using 3D software and quickly find its general position in relation to a scale model of the moon by lining up the features.

A more precise method would probably use known distances between features.

Using 3D software we can also see what the image would have looked like had it been taken at an altitude of 300km. (The red highlight indicates the near-side.) 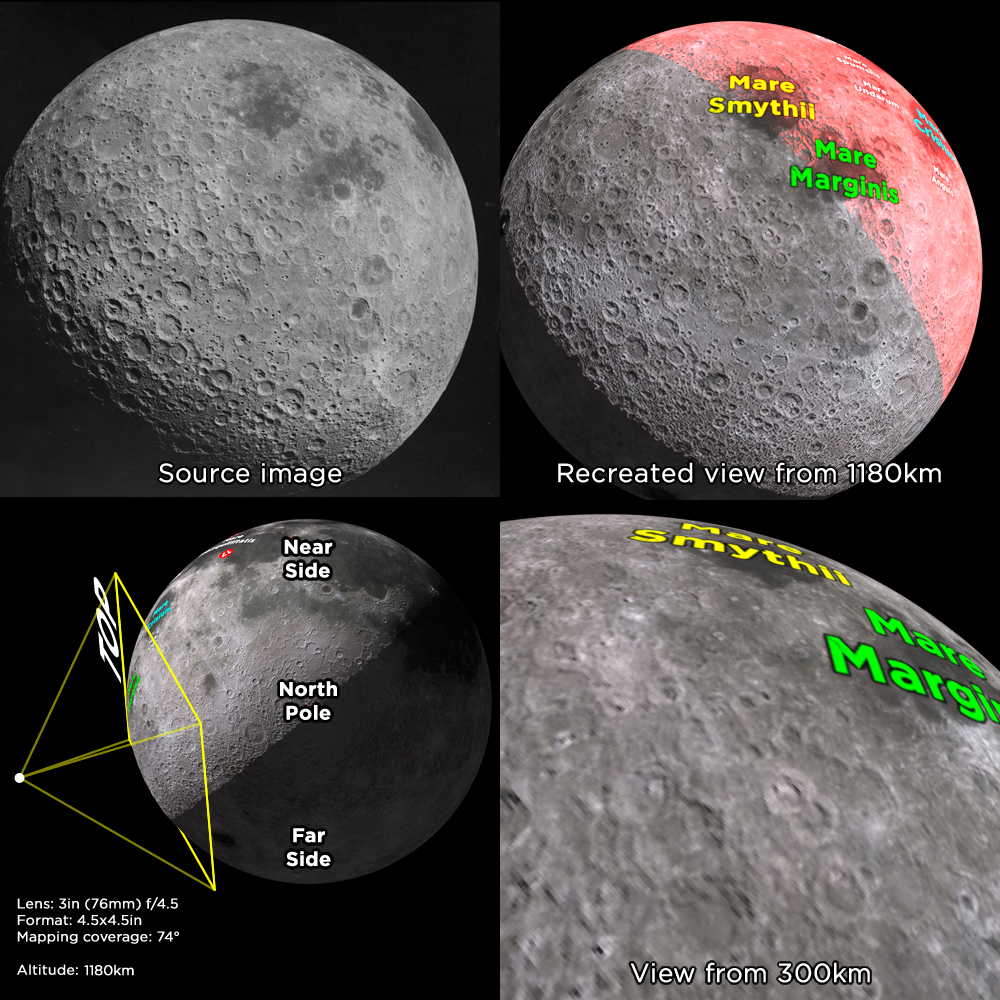 The visible footprint viewed from a more familiar angle: 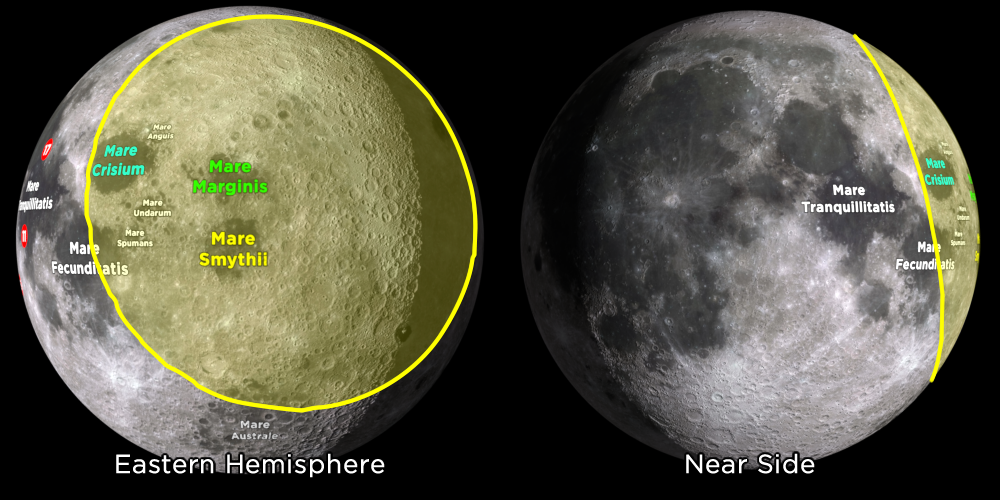 The initial Lunar orbit was roughly 100x300 km, with the further point being at the far side. From the mission transcripts, we learn of a request to photograph the Moon at the terminator, at the far side (Because there was no communication with Earth) Using this simple calculator, I find that only 7% of the Moon's surface would have been visible at 300 km. The full map of the Far Side can be seen below. It looks like the far side, and the scale is clearly different, but it doesn't seem to be a factor of 7 that would be required! 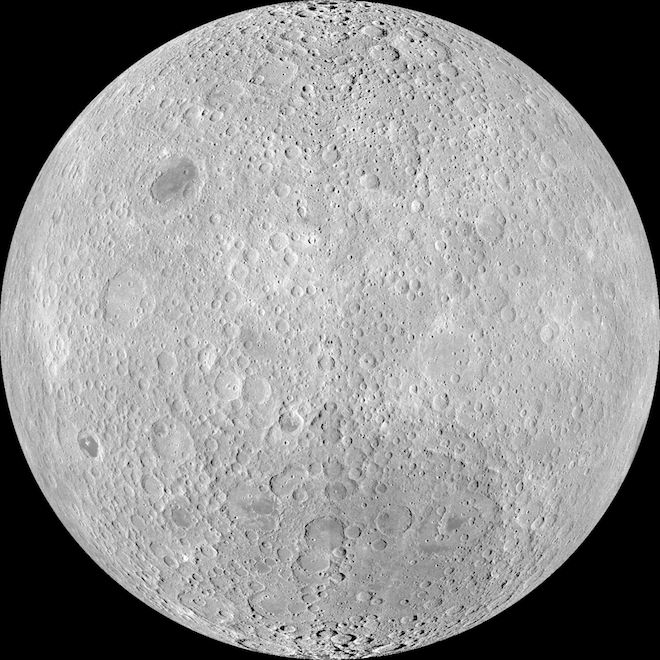 Lastly, I've found that 10:30 is supposed to be the direction of Lunar north in the image.

A few things stick out to me. First of all, I believe the entire image is not the far side. In fact, I believe the left most edge is actually the Near Side, as the far side doesn't have many mares, and the line between the two is near perfect.

After doing quite a bit of digging around, I've found the source for this image. It turns out it wasn't taken by an astronaut at all, but rather by an instrument known as the Mapping Metric camera, which was used to map the Moon for Apollo 15-17. The film was retrieved in a short EVA on the way home from the Moon. It seems this was one of the photographs taken on the way home from the Moon, as it is one of the last in the series. You can see the entire series at the Apollo Digital Archive website. The time of the photograph isn't recorded that I can find anywhere. The last photograph before it that has a time is 3000, 1972-04-24T23:32:28, which starts to show the curvature of the Moon. I believe what actually happened is the Lunar return trajectory started on the far side, and came along a course that allowed for much of the dark side to still be seen. Trans-Earth Injection happened at 25 Apr 1972 02:15:33. Likely the photo was taken slightly after TEI, although I can't find the timeline more accurately than that. The photos can be seen to slowly get further away from the Moon, starting at 3000. Before that, they were taken about every 30 seconds. They stopped taking pictures per the standard plan, but at 200:33 they turned the camera back on for a while. That was 10 minutes after the TEI, which seems like it would be in a good place to capture the pictures they returned of the "far side" of the Moon. It was on for about 2 hours, until about 202:55. For certain at some point during that time a "global" view of the Moon would be visible, and towards the earlier portion the far side should be visible. I can't find the altitude vs time, but this now all makes sense! 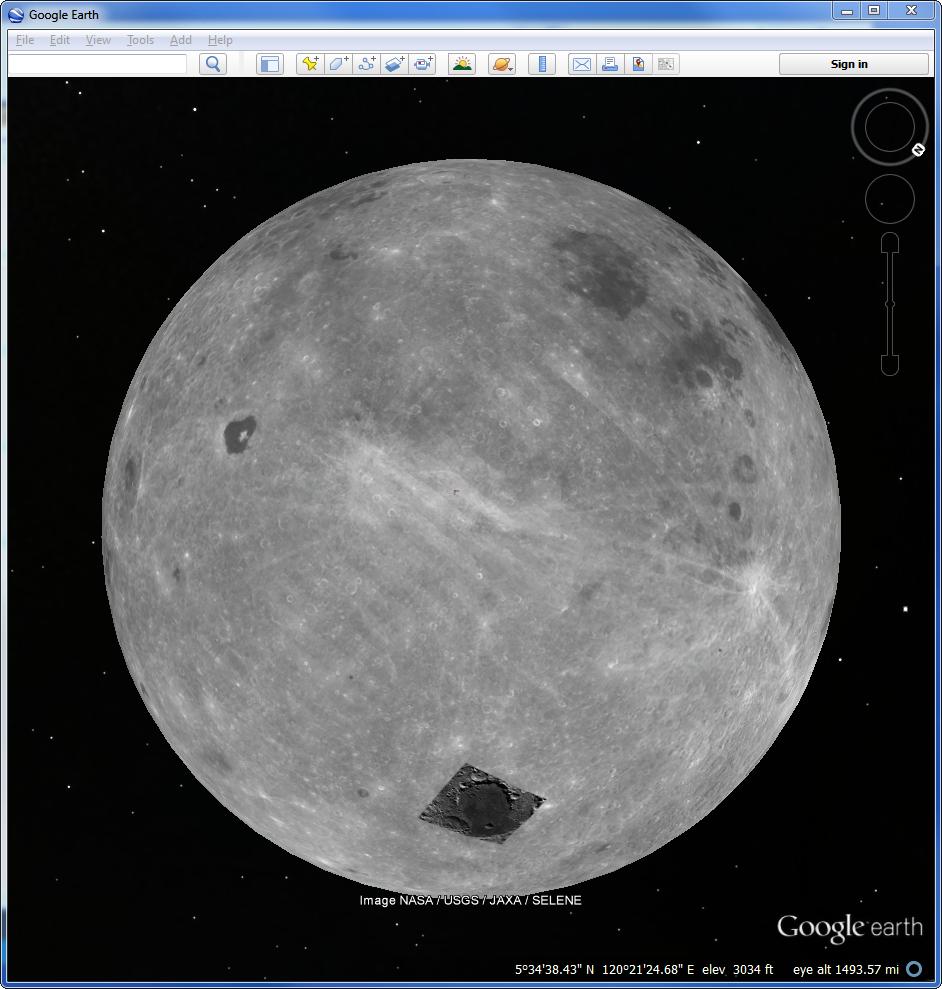 So I roughly got into the right position to match the photo taken. The eye altitude is a little too low, so ignore that, but I think the lunar longitude is roughly correct (120° E). I'm very skeptical that this image was taken while at the stated lunar orbit altitudes. Those altitudes are just way too low to have these features appear as they do.

My best guess for when this picture was taken was during the return to Earth, probably not long after the trans-earth insertion burn. At this point the CSM would be on an escape trajectory leaving the moon, so it'd very rapidly gain altitude on the way out. It's also consistent with which hemisphere is visible (eastern), since that would be the departing side of the moon.

The mission report also notes on page 5-8 (pdf pg 48) that the mapping camera was also used "vertically" after trans-earth injection. I would guess that this image is from the mapping camera during that time. Unfortunately I can't really find any information about exactly when and where this occurred.

Another image from a lower altitude: 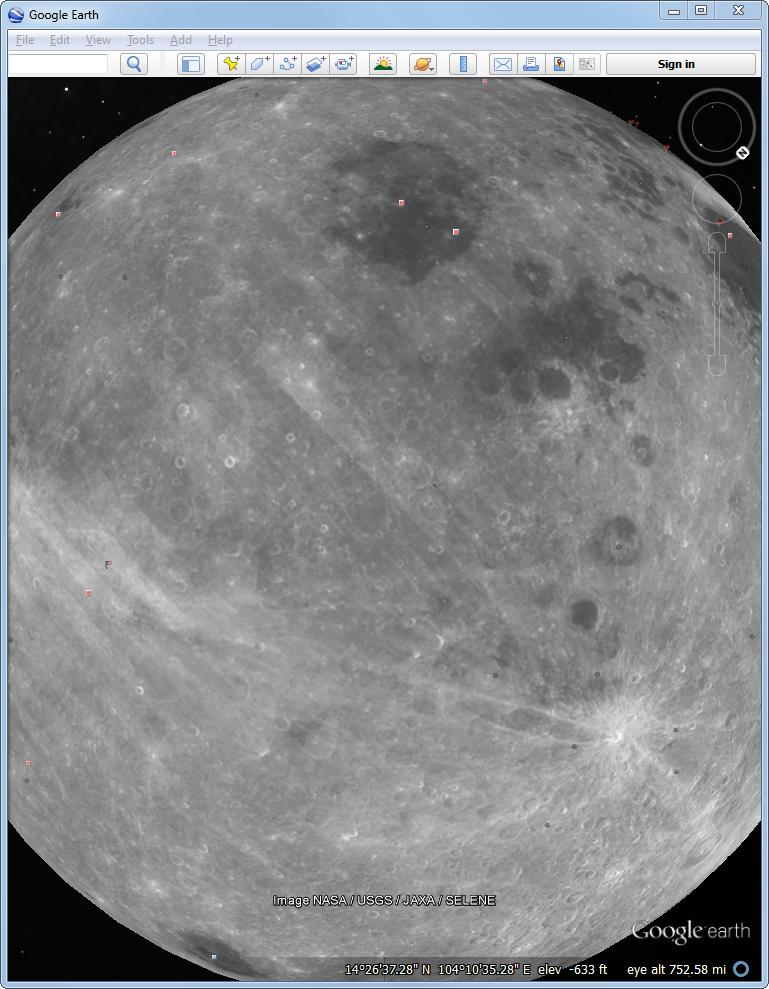 I apologize for the cropping on this, Google Earth has a fixed horizontal FOV and changing the window width leaves roughly the same horizontal portion of the moon visible. However, I think this image is a better match for the picture in the OP. In this case, approximately 20% of the lunar surface is visible.

When they performed a burn to enter lunar orbit above the far side, they were at ~300km above the surface. I can't find when this photo was taken, but I'd say there's a good chance it was then.

33
Why does this image of Jupiter look so strange?
4
Are Longjiang 1 and 2 the only spacecraft to image the far side of the Moon in a single frame with detail?

13
Have there been any photos taken of a total Earth-Sun eclipse from the Moon, or its vicinity?
3
What's the story behind this Apollo-era image?
1
Should there be black crosses from the Réseau plate in this Apollo mission photograph? If so, where are they?
6
Did Apollo-11 astronauts rehearse their photoshoots on Earth?
4
Are Longjiang 1 and 2 the only spacecraft to image the far side of the Moon in a single frame with detail?
5
Has there been any serious prospect of human landing on the far side of the Moon?
1
Did the MarCo cubesats photograph each other or the Centaur stage from which they were deployed?