I searched for night pictures of the ISS, but most of them seem to be from before the station passes into Earth's shadow, even though it crossed the terminator.

Are there any pictures of the ISS when it is fully shadowed by the Earth?

Are there any floodlights that can be turned on/off? What about a picture from within/without?

The best image I can find is this one: 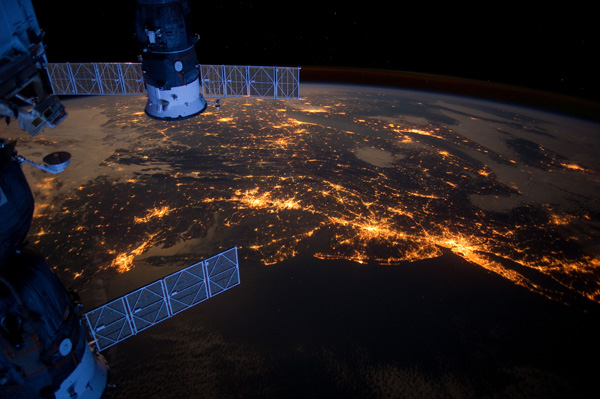 There are a few external lights on the spacecraft, mostly to assist docking spacecraft at night. See Why does the International Space Station have a downward facing light? for those pictures and where they are.

The reason there aren't a lot of pictures...is that it's really dark. We spent a lot of time in robotics training emphasizing this. The ISS arm has spotlights on the tip and on its steerable elbow cameras, and the steerable truss-mounted cameras have lights on them too (some of these lights are burned out, at least in the final STS program era). The crew had to use all these lights to illuminate the areas of interest if robotic ops were required at night.

Edit: As of Jan 16 it seems that many of the lights are still burned out and haven't been replaced.

But most of these lights have been in space for 10+ years and now the majority of them are totally dead, while others are dimming.....If they continue to burn out, we'll eventually get priority because it will get to a point where we just can't do close-contact robotics at night without new lights, which could essentially double the time it would take us to do things.

22
Why does the International Space Station have a downward facing light?

16
Where should I look in ISS to find mouldy food?
22
How are EVA's in LEO affected by being at the night side of Earth?
18
Why is NASA planning to deorbit the ISS instead of reusing its newer modules, like the Russians will?
8
What is considered the 'map scale' that ISS astronauts view the Earth?
3
Would a lower LEO ISS orbit really have a shorter eclipse duration than a higher one?
11
Are pictures taken from ISS geolocalized?
0
How does the ISS crew adjust the color of the new LED cabin lighting? Is there a knob somewhere? Can it be programmed to change by itself?