Could a helicopter fly on Mars?

Helicopter drones are awesome fun down here on Earth, but what if... we took one to Mars? This sounds like a good question for Randall Munroe. But I read about a proposal to send a helicopter drone (MHS) to Mars with Mars 2020. 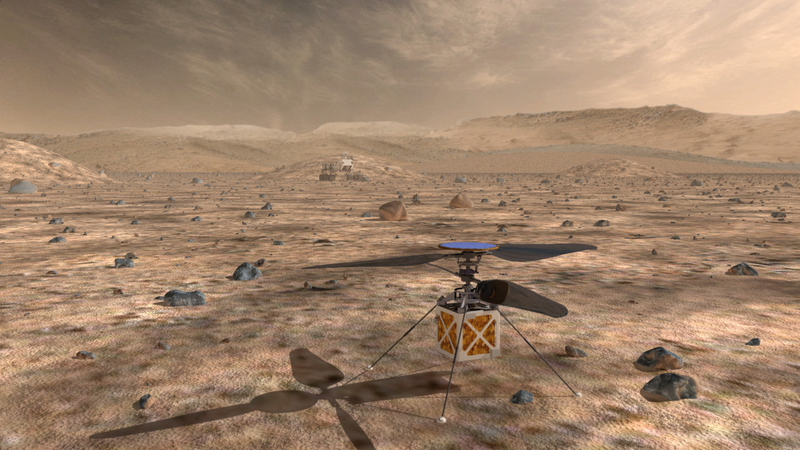 Martian atmosphere's density is a fraction of a percent of Earth's (average 0.6% ASL). My off the cuff calculations say that such a drone would have to be 200 times more powerful than its Earth-bound cousins.

Is this a realistic proposal?

Gravity is about a third of Earth's and competitive aerobation helicopter models have a truly excessive power surplus. Just look at this.

There won't be any manned helicopter flight. The helicopter power scales poorly with size - there's a reason we have no VTOL Jumbo Jets. But the same up-scaling issue is our friend when down-scaling. A 6kg helicopter can lift 30kg of payload, so we have equivalent of TWR=6 on Earth.

Drag and lift are both identically (quadratically) proportional to airspeed, so the same loss of lift causes loss of the primary limiting force of the helicopter - air drag on the blades. What's left is mechanical losses (friction of bearings), and mechanical durability of the construction, but these can be built with much surplus - plus larger rotor blades will offset need for extreme RPM.

Of course other things must be taken into account. These flights will be more like "hops" - a short segment of flight followed by a looong recharging period. And the drone will need to be small - and that means not much scientific equipment. Unfortunately, that also means it won't be fully autonomous as there simply won't be enough room to fit a good radio and antenna to reach Earth, or even the satellites. But it could definitely serve as a "recon vehicle" for a large rover, fetching small samples, testing firmness of ground surface for driving over, and planning the best route.

Ingenuity has performed its first flight.. Most of data in my post predicted Ingenuity's parameters correctly. 2,500 rpm at 60cm rotor radius gives 157m/s top linear speed of the rotor tips, vs 267m/s speed of sound in carbon dioxide (and 90m/s in aerobation RC helicopters), so they remained subsonic. It's lightweight - 1.8kg, comparable to heavier aerobatic models. It uses the rover as a retransmitter to contact the satellites and Earth. The rotor blades are both wider and longer than in aerobation RC helicopters to compensate for the thin atmosphere, but the motor is comparable to mid-shelf models regarding power output. The helicopter is capable of a 30s flight and requires a day to recharge the batteries. 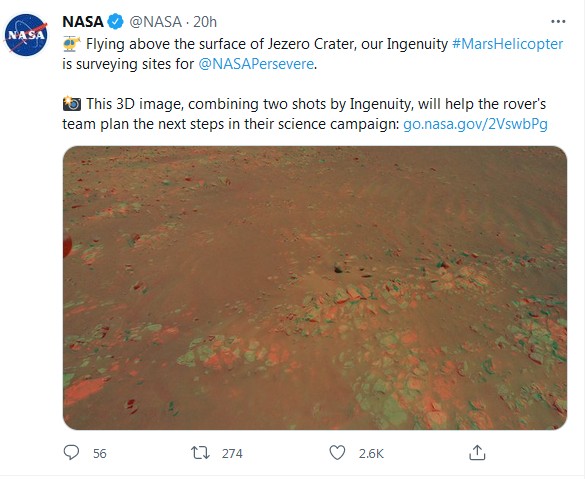 There's nothing like seeing it flying in a Mars-density chamber to answer your question:

I have a really nice video of it in controlled flight in the chamber, but I can't find that one on the interwebs yet.

Thanks SF for this link to nice video.

You can calculate the hover power required out of ground effect by using the following formulas:

Given $m$, the mass of the helicopter, the required lift force is $L = g_{Mars}\cdot m$

The required shaft power is:

The fact that the counter rotating rotors are coaxial does not significantly reduce the hover power. The effective diameter is nearly the same. Note that, when the mass is reduced to 1 kg the required power would be only 87 watts!

When flying forward instead of hovering the required power goes down significantly for a well shaped streamlined fuselage. In 1929 Glauert came up with an approximate formula (the solution of a quartic) which is still used today. A good reference text book is: B. W. McCormick: Aerodynamics of V/STOL Flight.

I do not object to Mark's answer, but I am concerned with the rotor blades rotating so fast that they will be entirely within a supersonic flow. Maintaining helicopter blades within a subsonic flow is a limiting factor for helicopter speeds here on earth. How would the rotor's lift be affected if it were entirely behind a shockwave? On earth most subsonic wings placed in such conditions simply stall. Also because Mars' atmosphere is so cold, the local sound velocity should be quite low, hence a rotor for Mars better be designed to function within transonic and supersonic regimes. A good example of this problem: the U2 spy plane (granted not a helicopter) at its highest altitude it was at the combined limits of not flying fast enough to generate enough lift (in atmosphere), or flying too fast and going supersonic (low local sound velocity) which was not good for the type of plane it was.

Yes. Ingenuity has proven this capability through its various test flights. This was actually the primary goal of the mission, as NASA states.

Not the answer you're looking for? Browse other questions tagged mars aerodynamics technology helicopter or ask your own question.

40
How can a Mars helicopter be autonomous if there isn't a Martian GPS?
43
Why aren't we sending quadcopters to mars?
3
Is it possible for entomopter to fly on Mars carrying payload of 1-2kg?
2
Is it 100x more work to fly on Mars?
3
Could a drone escape Mars' atmosphere?
6
Is there a feasible power supply for a scaled up Mars helicopter
3
Mars gyrocopter - feasibility
1
Can we use drones in planetary exploration?
3
Kinematic and Dynamic viscosity on Mars