Is it possible to absorb energy from solar flares

I've learnt that solar flares have so much energy in them, but is it possible to tap the energy from them?

Two scientists, Brooks L. Harrop and Dirk Schulze-Makuch, have hypothesized that a solar wind satellite built with the right proportions can generate an upwards of 1 billion billion gigawatts of energy(see pt. 5 below). The satellite's main components consist of a copper wire, receiver, and a sail. The satellite's charged copper wire, aimed at the sun, would create a magnetic field to snatch these highly charged particles coming from the sun. The particles that are captured are then directed towards the satellite's receiver unit, which produces a usable current. This self-sustaining satellite would divert energy generated into powering its magnetic field and the remaining energy would go on to power a laser that would aim at energy bases on Earth. The drained particles fall onto the sail and are soon recharged by the sun and propel the satellite through the particle's repulsion of magnetic fields. 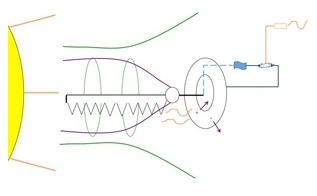 The disadvantages of this system lie within transporting the energy captured back to earth. One idea is to use a concentrated laser beam to send the energy back to Earth. But, there is several millions miles separation between satellite and Earth making it difficult for the laser beam to reach the planet without diffracting and losing energy. Also, with the current technology, there are no lenses powerful enough to direct a laser towards earth.

While solar wind will likely be a contender for source of renewable energy in the future, we lack the technology to develop something that will actually harness this energy, so for the time being, we have to stick with other existing source of energy.

Not the answer you're looking for? Browse other questions tagged energy solar-flares or ask your own question.

12
What is the status of concentrated solar energy (CSE) in space exploration?
15
Can we transport energy through space?
12
How do you slow down a solar sail?
5
How would Solar Flares affect Solar Sail navigation?
10
How do solar flares degrade orbits?
5
Which objects in our solar system are naturally protected from solar flares?
2
"Free energy" moving the space elevator possible?
4
If a solar flare happened during a total lunar eclipse, would the Earth block the flare from hitting the moon? And for how long?
4
Energy from Earth's magnetic field using space tether