Does NASA use Newtonian model of gravity for plotting the course of Juno or general relativity?

With the huge mass of Jupiter and its fast, approximately 10 hours daily rotation, there may be substantial twisting of space-time around it.

A distortion of such magnitude that may call for considering the effects of time dilation or twisting and smearing of the Time-space especially because of Juno's elongated orbit.

Is this still below the tolerance level of the mission or they have had to deal with it?

Today I found this article on Lense-Thirring effect on this subject which is really interesting! space-time frame dragging.

It is a bit involved mathematically but basically it says objects in orbit very near a large mass would be under a pseudo torsion opposite the orbit's direction and also the mass of orbiting object will increase if it rotates opposite the induced torsion and decreases if it rotates along the torsion. One way of describing the frame dragging is looking at it like a planetary gear box: the sun gear at the center rotating clockwise induces a torsion anti clock to planet gear and clockwise the ring gear 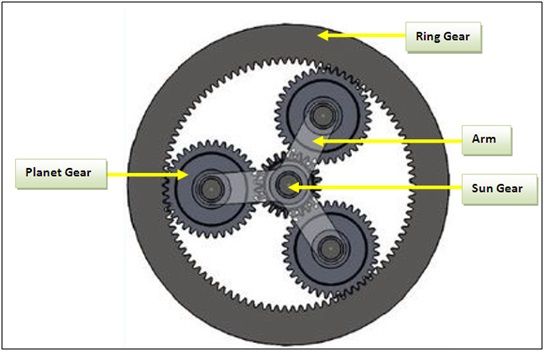 Not only does it use Einstein's Theory of Relativity, it's actually going to use Jupiter's huge mass to do a test that hasn't been done yet, on how it affects rotating objects. As it's expected to affect the gyroscopes, that is most certainly something that will have to be taken into account.

Not the answer you're looking for? Browse other questions tagged gravity interplanetary jupiter navigation juno or ask your own question.

9
How to calculate the planets and moons beyond Newtons's gravitational force?
2
How, and How Well will Juno measure the effects of frame dragging? (GR effect due to Jupiter's mass & rotation)

8
Does Juno use MPPT?
7
Why does the Juno spacecraft flyby Earth on the way to Jupiter?
20
How long does it take for a signal to travel between Earth, and Juno at Jupiter?
5
Why does Juno use "mixed oxides of nitrogen" oxidizer for propulsion? Which ones?
3
Does a gravity model exist for satellites in LEO?
12
Did any spacecraft ever use the Sun's gravity for acceleration?
3
Does the Juno spacecraft have an "open signal, by design"?
8
Did the spacecrafts Galileo or Juno use the Galilean moons for a gravity assist before entering Jovian orbit?