How was it possible for the Apollo 11 to film and take pictures with such radiation?

There's plenty of people who said it would have been impossible for the astronauts in the Apollo 11 to film or take pictures in the moon due to the high radiation there's in the moon because of the lack of an earth atmosphere.

They compare it with some recordings of the Chernobyl accident which show some fast lights on the films. They say those are the radioactive particles hitting the film of the camera which doesn't seem to happen in the moon films.

Others say it would have been impossible to take any film outside the magnetic field of the earth as these would have been destroyed by the amount of particles in the outside.

The radiation dosage for a year on the moon is between 110 mSv and 380 mSv. On Earth, that dosage is 2.4 mSv, or higher, depending on where you are exactly. Bottom line, the few days in Lunar orbit would have aged the film due to radiation between 50-150 days/ day in orbit maximum, thus it would be the equivalent of film that was aged a few years at most. The environment at the Moon is more likely to have high energy effects, which I'll get to later. Chernobyl produced about 80 mSv/ second after the incident, considerably more than on the surface of the Moon! To this day, the dosage at the center of Chernobyl is around 10 mSv/ second.

The Apollo missions were launched near the Solar Minimum, which would tend to have more higher cosmic ray strikes, and higher overall radiation, but fewer solar storms.

Furthermore, there actually ARE signs of radiation in some of the images, if you look carefully. At the very least, it's dust in on the film, the two can be difficult to tell apart. For instance, look in high resolution at the dark portion of this image. The lines that run through it are quite possibly signs of radiation strikes, or even (gasp!) stars. 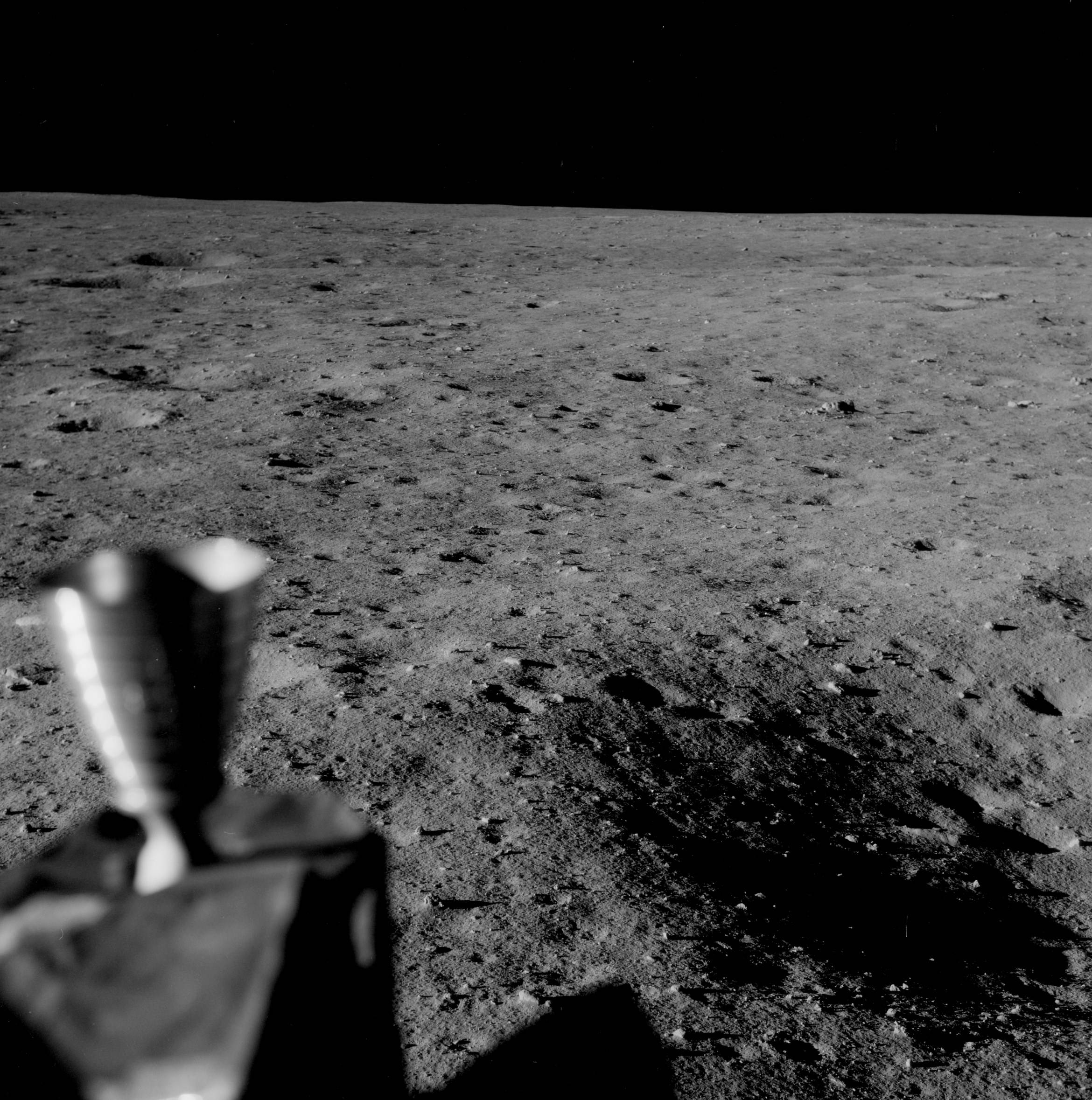 Radiation can affect film - but bear in mind the radiation around Chernobyl was, truly, extremely high. The radiation in our region of space is not as extreme.

Also bear in mind that the earlier Lunar Orbiter probes used film cameras, the pictures were developed and scanned automatically (by machinery on board) and the results transmitted to Earth. The results were pretty good!

NASA studied the effects of radiation on film. Bright spots are just one of the possible results. Other effects include an increase in the amount of noise, and a decrease in contrast and color response. These effects are not easily detectable to the untrained eye and without access to the original material.

In this study, NASA also experimented with shielding. The shield in use provided little to no benefit.

Radiation levels during the Moon missions were far lower than in Chernobyl. Total mission dose was on the order of 1 rem (0.01 Sv).

A more primary account of the Soviets' use of American film is this translation of a St. Petersburg newspaper article.

Not the answer you're looking for? Browse other questions tagged the-moon apollo-program radiation camera myth-busting or ask your own question.

31
How far can you fall on the Moon without injury?
47
How did the Apollo astronauts change film in their cameras?
8
What happens to a spacecraft crashing into the Moon?
37
Why can't we use the same radiation shielding in Mars that we used when going to the moon?
6
How does Voyager take pictures in space?
6
What data was used to estimate accumulated radiation dose for the Apollo astronauts?
43
How did Apollo missions solve the cosmic radiation problem?
4
Stanley Kubrick used a NASA-inspired lens to film by candlelight in Barry Lyndon, but what did NASA use it for?
29
How did the Apollo guidance computers deal with radiation?