How big of a problem is the Lunar eclipse in April 2014 for LADEE?

I've been watching this NASA ScienceCasts video on YouTube (also published on NASA Science), and towards the end the narrator mentiones the end of life for the LADEE (Lunar Atmosphere and Dust Environment Explorer) mission. This is a partial transcript from the mentioned video:

On April 15th of next year, the sunset colored shadow of Earth will envelop the Moon for a Lunar eclipse. It will be a grand sight from Earth, but bad news for LADEE. The spacecraft is solar powered, and requires sunlight to charge its batteries. An eclipse could end the mission.

It goes on to explain that NASA is considering an option to deorbit LADEE before the eclipse and crash it on the Lunar surface, which might provide additional opportunity to study Lunar surface and its dust. 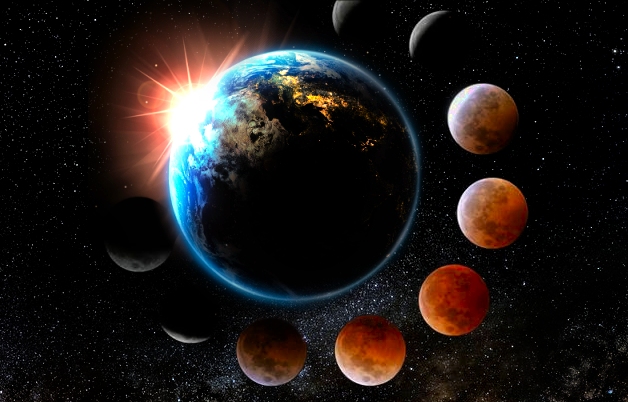 Next Lunar eclipse will be on April 15th, 2014 when the Moon will pass directly behind the Earth into its shadow. (Image: myself :P)

But all this talk of LADEE not being able to survive roughly 2 hours of more or less total darkness sounds rather counterintuitive to me, considering it would (my assumption) have an orbit around the Moon with nearly half of it in the dark anyway. Or am I wrong on this? 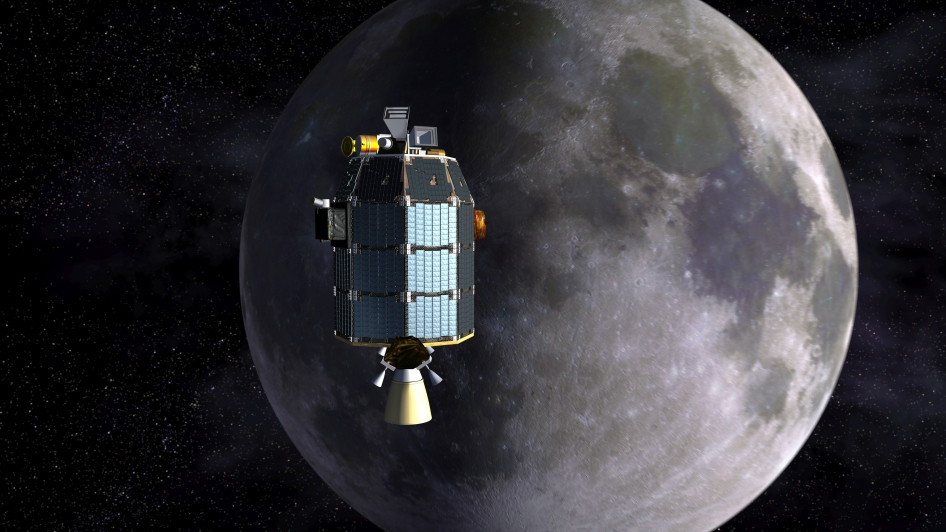 LADEE, the Lunar Atmosphere and Dust Environment Explorer, will explore the Moon’s thin exosphere and dust environment to
answer questions on the formation and evolution of exospheres, that are thin, atmosphere-like volumes surrounding planetary
bodies, with molecules gravitationally bound to that body, but their density too low to behave as gas. (Image: NASA Ames)

Some previous probes that were also at risk of failing on Lunar eclipses survived just fine, in fact, NASA was rather surprised how well they did, for example with the GRAIL (Gravity Recovery And Interior Laboratory) twins. Quoting Spaceflight 101 GRAIL mission updates:

On June 4, the GRAIL twins had to endure a lunar eclipse during which their solar arrays received no sunlight to charge the vehicle’s batteries. Both spacecraft made it through the eclipse alive and in good condition. Originally, the GRAIL mission was planned to occur in between lunar eclipses because the spacecraft were not expected to survive two hours in darkness. After flying the two spacecraft for a while, teams saw that the twins were performing better than expected and could survive an eclipse.

So my question is, how well can the implications of this next Lunar eclipse be predicted for LADEE, learning from past missions that faced similar threats, and taking LADEE mission parameters and onboard equipment requirements into account.

Does LADEE really have no chance of continuing its mission past the April 15th, 2014 Lunar eclipse and should indeed be deorbited and crashed into Lunar surface before that event?

The design of the LADEE science orbit is such that, when the onboard propellant is almost gone at the end of the Science Phase, LADEE's orbit will be managed down to lower altitudes until it impacts the lunar surface. LADEE will continue to acquire data until impact.

It is unlikely there will be any attitude requirements during decommissioning, except perhaps keeping the antenna pointed at the Earth for telemetry and tracking until the last orbit.

There are no plans to target the impact points on the lunar surface. If LADEE's propellant is depleted and orbital decay occurs naturally, the point of impact may not be in sight of Earth. 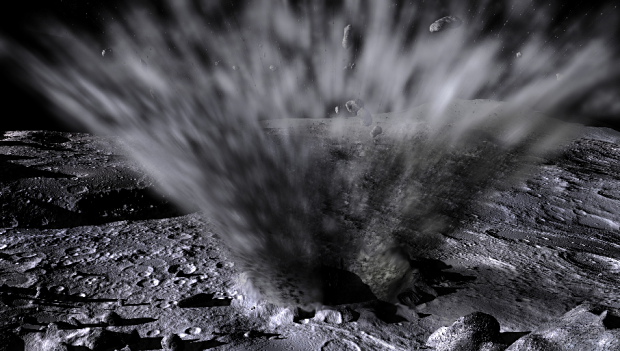 So in short, no additional mention of the Lunar eclipse being the likely reason for LADEE's early retirement with a bang, but it does give more info on mission parameters that will inevitably lead to it.

Okay, so let's get a few numbers here straight, and then I'll explain why it's an issue, and why we can probably recover from it just fine, hopefully. Let's start with figuring out what the nominal eclipse time is for the LADEE satellite. NASA quotes:

The nominal science orbit will be a near-circular retrograde (clockwise) equatorial orbit with a period of 113 minutes at about 50 km above the surface.

Okay then, how much time will be spent in eclipse at that range? I don't have the tools to make that calculation with the Moon, but I found an article about Earth orbits, with numbers that can conveniently be changed to Lunar parameters.

Using the lunar numbers instead of earth, assuming a worse case $\beta=0$, gives an eclipse time of:

Thus, one can expect that the batteries will last for at least that long.

So, why can't the satellite survive a lunar eclipse? The worse case lunar eclipse starts just before one leaves eclipse. That will give 1 normal eclipse, plus 2 hours eclipse time, plus possibly up to 1 more eclipse after. I'm going to just make it simple and say 1 orbit plus 1 eclipse time, or 113+51=164 minutes. That is 3 times what the nominal eclipse period is. Thus, if you were going to survive that, you have two options. First of all, reduce the power to 1/3rd of nominal eclipse power. The second is to put 3 times more battery capacity in. Of these, I suspect the first will be attempted, while using some surplus battery power to help keep things stable. Otherwise, your battery mass has increased by a factor of 2. As batteries are typically one of the heavier components on a spacecraft, that is significant!

So, why is this probably not a bit deal? Spacecraft are usually made with the idea that occasionally, something will happen, and they have a resulting safe mode as a result. This safe mode will keep the satellite from damaging its batteries, for instance, but might cause some damage as the thermal limits often are violated in such a mode. However, there are spacecraft which survive regularly without relying on batteries to survive eclipse. The best example I know of is the AO-7, without battery power for 30 years in LEO, yet it still keeps on working. Most likely, the lunar satellites employ such a technique, that while it might take a few days to recover, they will be able to eventually point back at Earth and recover communications. LADEE is equipped with omnidirectional antennas, so as long as it can point it's solar arrays at the sun, it can recover. I seriously doubt NASA will crash the satellite before the eclipse, unless there is something else wrong with it.

It's worth mentioning that this is a very common scenario for Earth orbiting satellites. Many of them are actually designed to tumble slightly in the event of a power loss, which will ensure that eventually they will point at the sun, charging the batteries, and from there they can re-gain communications with the ground. It actually takes very careful work to make a satellite that won't tumble in the event of low power, and this will ensure eventual recovery of the satellite given enough time, although perhaps with the slight loss of lifetime or other such issues as a result from the uncontrolled period of time.

How big of a problem is the Lunar eclipse in April 2014 for LADEE?

8.5 years later, we know the answer. From Wikipedia's LADEE; End of mission:

The probe then dealt with the April 2014 lunar eclipse on April 15, during which it could not generate power because it was in Earth's shadow for four hours. Science instruments were turned off and heaters were cycled during the event to conserve energy but keep the spacecraft warm. Engineers did not expect LADEE to survive, as it was not designed to handle such an environment, but it exited the eclipse with only a few pressure sensor malfunctions.

Per AP News' NASA’s moon-orbiting robot crashes down as planned:

The last thing the LADEE team wanted was “to plow into any of the historic sites,” said project manager Butler Hine.

LADEE completed its primary 100-day science mission last month and was on overtime. The extension had LADEE flying during Tuesday morning’s lunar eclipse; its instruments were not designed to endure such prolonged darkness and cold.

But the small spacecraft survived — it’s about the size of a vending machine — with just a couple pressure sensors acting up.

The mood in the control center at NASA’s Ames Research Center in Mountain View, Calif., was upbeat late Thursday afternoon, according to Hine.

“Having flown through the eclipse and survived, the team is actually feeling very good,” Hine told The Associated Press in a phone interview.

But the uncertainty of the timing of LADEE’s demise had the flight controllers “on edge,” he said.

As it turns out, LADEE succumbed within several hours of Hine’s comments. NASA announced its end early Friday morning.

Not the answer you're looking for? Browse other questions tagged the-moon artificial-satellite end-of-life environment ladee or ask your own question.

7
How much power loss does the LLCD suffer in transit?
10
Is the UK Space's MoonLITE project still on?
11
Why did NASA intentionally crash the Lunar Atmosphere and Dust Environment Explorer (LADEE) on the moon?
4
"Lunar vacuum cleaner": Design considerations for regolith dust suction system in exospheric conditions
11
When Chang'e-3 landed on the moon, did LADEE notice?
3
What are NASA's dozen payloads for the Moon that will be ready for launch by the end this year? (2019)
5
Choosing a specific region to live on Mars, how important will the degree of dust there be, compared with the availability of water?