Do planets further from the sun take longer to complete their orbit?

See Topic. I know it is true for Sol, but in another solar System, is it possible that the mid or outer planets are completing one full orbit in a shorter amount of time than what a (smaller?) planet, closer to the star, would require ?

Yes, it is possible.

While the other answers show the correct observation that the orbital period is directly derived from the semi-major axis (half the distance of the longest axis of an ellipse), that is not exactly the same as the average distance. Consider the following example: 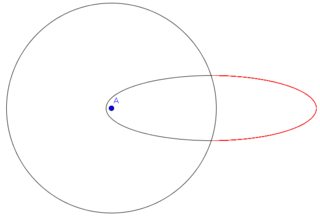 Here, both the circular and the eccentric orbit have the same semi-major axis, and thus the same orbital period. The eccentric orbit is divided roughly in half, with one part closer to the Sun than the circular orbit, and one farther away (red part). However, an object moves faster in its orbit when close to the Sun, so the object is going to spend a lot less time in the inner part than in the outer part. The average distance is then larger than that of the circular orbit. Trading a little of that average distance to get a slightly lower orbital period, your scenario is achieved.

While what you describe is is technically possible in this way, what you are really after is what the others have explained. This is just a remainder of how orbital mechanics can surprise you once in a while.

No, the laws of physics are the same wherever you are. Kepler's Laws govern what kinds of orbits planets have. In this case, we are interested in Kepler's Third Law. It states that the square of the period is proportional to the cube of the semimajor axis. Mathematically, this is $P^2\varpropto a^3$.

Basically, this means that the further away a planet is from its star, the longer it takes to complete an orbit. This is a universal law, and it does not matter whether the system in question is our own solar system or some other planet going around a faraway star.

The size of an orbit is relative to the speed of the orbiting object.

If a planet moved faster, it will be further, and completing a revolution will take longer because of the increased distance.

No, inside a single solar system this is not possible. The larger a circular orbit the longer it will take to complete.

If we have two different solar systems, one with a massive sun (and thus higher speeds needed for the same orbit) and you compare that to a system with a lighter sun then you will see different speeds. But then we are comparing two orbits around two different suns.

Secondly, I have no idea how this will work for non-cicular orbits. Especially if you take one circular orbit and one highly elliptical one. Also, how do you declare which is the 'outer planet' if the ellipse takes it both inside and outside the other planets orbit?

5
Do transfer orbits toward the central star necessarily result in a higher velocity on arrival due to the star's gravity?

16
Does a mission to Venus orbit require less propellant than a similar mission to Mars?
35
Why should space probes have to orbit the Earth before being launched at other planets?
1
Repeated slingshot encounters with the same planet
5
Do transfer orbits toward the central star necessarily result in a higher velocity on arrival due to the star's gravity?
3
How do I calculate wait time to launch?
5
RIP Kepler, how shall we call your orbit? Does this cyclic flip-flop process have a name?
1
Would a space rocket launching from Ceres in a path to Jupiter be faster relatively to the sun than one launching from Earth?
5
Is a graviational slingshot around Mercury a feasible solution for space probes?